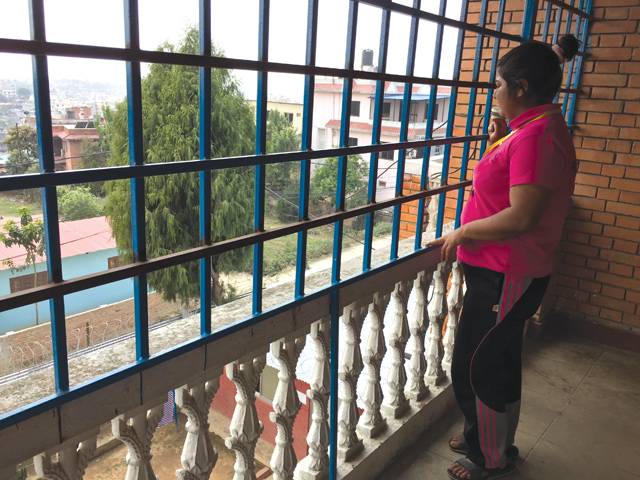 SHREEJANA SHRESTHA
COMING TO TERMS: Saraswati Basnet smoked marijuana for six years to slim down and is now learning to accept her body

Sushma Salma Timilsina always struggled with her weight. The psychological trauma of being too heavy led her to use drugs: today she is an addict.

Six years ago, Timilsina weighed 80 kg, but she wanted a fit body and flat stomach. Upon hearing that smoking marijuana could help lose weight, she lit up and chased her dream to be slim.

“I always felt bad about my body and wanted to look like my friends who had slimmer bodies,” Timilsina, now 22, recalls. “I gradually lost my appetite after I started smoking marijuana. Over the years I lost almost 30kg.”

Originally from Hetauda, Timilsina lives in a rented flat in Kathmandu with friends. She used to smoke as many as 30 sticks of marijuana a day as it was easily available, and gradually developed an urge for hard drugs. She admits now that she never realised how she was movng from smoking pot to popping pills. Two weeks after she started taking pills, her parents found out. They admitted her to Sober Recovery Women’s Treatment and Rehabilitation Centre in Kathmandu.

“I lost weight and became slim, but I never realised the drug was spoiling my life,” she told Nepali Times, adding, “I wish I had never taken drugs. I regret a lot what I did. Now I want to gain some weight and live a healthy life.”

Body shaming is leading many young girls to try using drugs to stay slim. Out of 40 women admitted to Sober Recovery, 9 had been smoking pot from an early age to try to lose weight. Some, like Timilsina, moved to harder drugs and became addicts.

Experts warn that it is a dangerous, hidden issue. Says Tshering Wangdo of Sober Recovery: “In most of the cases it is difficult to counsel such girls because the issue of body shaming is closely related to their psychology.”

Saraswati Basnet, 22, also faced psychological trauma due to body shaming. Basnet weighed more than 100kg during her teen years, could never find clothes that fit and was publicly embarrassed about it.

“The word moti used to hit me right in my heart and I felt so embarrassed. I was obsessed with losing weight,” she says. “Smoking marijuana was my last resort, as other medicines I tried didn’t help.”

Basnet started smoking pot at age 18 and continued for six years, trying to lose 20 kg. She never reached that target, but she did get addicted.

Her husband admitted her to Sober Recovery a few months ago. Now Basnet, the mother of a six-year- old son, regrets the path she took and is learning to accept her weight. “I am still not slim, but I am happy with my body.”

Binita Thapa Magar is just 15 and also felt that she needed to lose weight to be ‘perfect.’ She started smoking marijuana because she felt her stomach was too large. One evening she was walking in the streets smoking when police caught her and handed over to the National Centre for Children at Risk at Bhrikuti Mandap. Eventually, she was taken to a rehabilitation centre.

Magar says she has learnt her lesson now: “I will stay away from drugs and eat less to have a flat stomach.”

A little cup of self love, Anjana Rajbhandary

Al Jazeera documentary humanises the statistics of the peace process

Bir Hospital is recycling its hazardous waste and winning accolades
BHRIKUTI RAI
Wow! It namely likewise fine treatise about JavaScript, babyliss pro curler I dissimilar Your post doesn't acquaint any sense. ray ban outlet uk if information are defined surrounded sketches one can effortlessly be versed with these. hollister sale I think a visualized exhibit can be better subsequently simply a effortless text, chanel espadrilles for sale that why it gives you improved quality. getnjloan.com Can you amuse forward me the code for this script alternatively interest distinguish me surrounded detail among relation apt this script? Vivienne Westwood online get a babyliss perfect curl Very soon this network sheet longing be outstanding among all blog viewers, isabel marant sneakers saleI too prefer Flash,