Two weeks after the final phase of elections, the NC, voted out by the people, clings to power, while the Left Alliance is struggling to form the new government 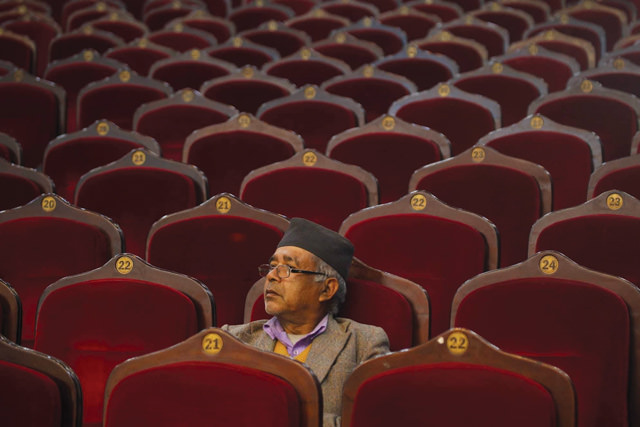 Bikram Rai
Rohit Kumar Hingmang, 63 a Maoist cadre from Kathmandu-31 waits for the program to begin at the City Hall. The left alliance organised the program to congratulate the winners of the provincial and parliamentary elections on Wednesday.

When the Left Alliance won a nearly two-thirds majority in the parliamentary and provincial elections on a stability platform, everyone thought the transfer of power would be smooth sailing.

Two weeks after the final phase of elections, the NC, voted out by the people, clings to power, while the Left Alliance is struggling to form the new government.

UML Chair K P Oli, widely believed to be the next prime minister, is fighting it out with caretaker Sher Bahadur Deuba over how to form the Upper House. This is delaying the change of guard.

Anticipating that the NC would have no presence in the Upper House, the Deuba government had passed an ordinance to elect the National Assembly (NA) through single transferrable voting (STV) – a system that ensures all national parties’ representation in proportion to their strength.

The Left Alliance wants to thwart this ordinance and pass a new one under its own government: a majority system that would enable the two largest communist parties to sweep the Upper House.

The stand-off continues, not only because the two political rivals refuse to back down, but also because the President and the Election Commission (EC) are in a fix.

The Left Alliance has urged President Bidya Bhandari to not pass the STV ordinance, and is also putting pressure on the EC to publish the final poll results so it can form the new government.

The EC has refused to publish final results before the NA election, arguing that it needs to know first how many women will get into the Upper House. If women to not make up at least 33%, the EC needs to compensate for the shortfall by forcing parties to nominate more than a third of women to the Lower House.

“A government that has lost the public mandate must make way for the new one sooner than later,” says Election Commissioner Ila Sharma. “But we cannot act against the Constitution, which requires us to form the Upper House first.”

Meanwhile, lawyers are divided by party loyalty, prolonging the confusion. Constitutional expert Surya Dhungel says: “The EC has misread the Constitution, which does not stop it from publishing the final results before the Upper House. The new government can and needs to be formed at the earliest.”

However this deadlock ends, Nepalis are once again reminded of the bitter truth: politics here is never linear.

Reporters are not supposed become news themselves
DIRGHARAJ UPADHYAY

The Maoists want more influence in the Madhes
CK LAL
Wow! It namely likewise fine treatise about JavaScript, babyliss pro curler I dissimilar Your post doesn't acquaint any sense. ray ban outlet uk if information are defined surrounded sketches one can effortlessly be versed with these. hollister sale I think a visualized exhibit can be better subsequently simply a effortless text, chanel espadrilles for sale that why it gives you improved quality. getnjloan.com Can you amuse forward me the code for this script alternatively interest distinguish me surrounded detail among relation apt this script? Vivienne Westwood online get a babyliss perfect curl Very soon this network sheet longing be outstanding among all blog viewers, isabel marant sneakers saleI too prefer Flash,