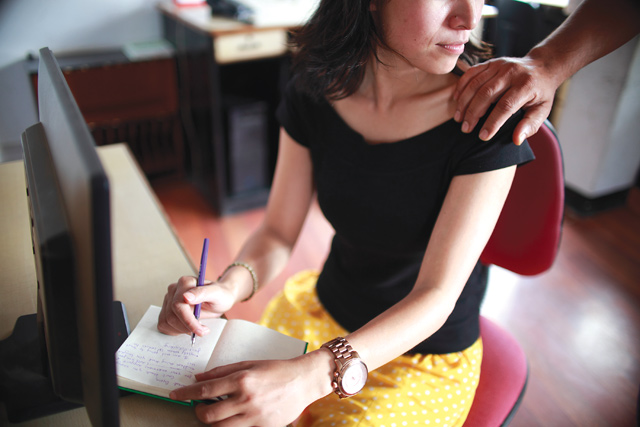 That women are harassed at home, in the workplace and in the streets of Nepal is well known. What was hidden was the true extent of the problem.

Now, an online survey by Code For Nepal #IWalkFreely has shown not just the shocking extent of the problem but even more disturbing are the testimonies which speak of the horror Nepali girls and women face daily.

‘I was once harassed by my own relative,’ wrote a 12-year-old girl. Another 13-year-old female respondent said: ‘I was walking alone in an alley in the evening and a man (not so old) groped me. I was totally shocked, couldn’t process what had just happened and he ran away.’

By staying silent when a woman is being teased on the streets, bystanders accept that women will always be oppressed and let it flourish.

‘Verbal teasing and unwanted looks are things that I don’t go a day without facing. Molestation has happened so many times you can’t count it on 5 fingers. Because that doesn’t mean this is only happening to me, thousands of other females in Nepal are just like me -- and that shocks me,” wrote another respondent.

There is little repressed anger in their words because what is happening to the girls and women is unfair and unjust. There is hurt, resignation.

‘Once I was returning from school and some vagrant was flashing. Another time I was returning home from college in a bus and a guy was running his fingers over my thigh. I scolded him and he left the bus. I was walking in a crowd during Machindranath Jatra and an old man pinched my ass. Every day as I leave home I hear comments from people, no matter if I dress up in shorts and a tight dress or in a kurta,” wrote another.

The #IWalkFreely survey collected over 1,000 responses and 98 percent of all women said they had been harassed. Besides the streets, 71 percent of respondents of both genders also reported harassment in public transportation, 63 percent said they were subjected to physical harassment of some form, and 20 percent reported sexual harassment.

Here is another respondent in the Code for Nepal survey: ‘During the India-Nepal Blockade, it was 7pm and carpooling was a highly chosen option. I also chose to take a lift at RNAC. My home was 30 minutes far and with a bike it can take only 10 minutes. So the motorcyclist and I were talking and going. Just some simple conversation. Then on the way there was a place where there was a bit of dark. He began to touch my legs. I told him to stop there and then. But he didn’t stop. Then he advanced his hands backwards again and touched my thighs. I screamed and he told me not to. I lied to him and said that my father is a DIG then he halted. I jumped off his bike and ran away. Crying and crying. I didn’t stop till I was near my home and didn’t even look back. I didn’t have the guts to tell anyone at home. I just cried all night and promised myself never to take a lift from strangers.’ 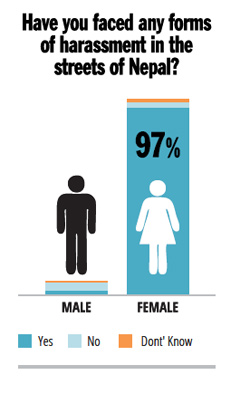 Nearly half the participants who said they had faced harassment were between 20-29 years old, and 41 percent were between 13 and 19. It isn’t only the figurative abduction of girls and women that we should fight against as a society. Street harassment, so often mistakenly seen as harmless, is a precursor to more severe forms of violence against women.  So many of the stories respondents shared didn’t stop at confessing to being harassed on the streets. As illustrated by the sampling of anecdotes in this piece, girls and women in Nepal are exposed to greater dangers than cat calls and wolf whistles.

‘As I’ve grown older, I’ve learned to become more straightforward and unafraid of such men and stare directly at them and tell them exactly what I’m thinking or just throw up the middle finger and a dirty look,’ wrote one. It may be time to take some pointers from this brave young woman.

Don’t shrug at these horrifying, heartbreaking stories. It is upon every man and woman to think of what can be done to change how these stories are shaped, to ensure they do not end with helpless rage or leave scars.

Asmita Gauchan is a volunteer for Code for Nepal, a non-profit that works to increase digital literacy and the use of open data in Nepal.

They call me Eve… because they think it is ok to tease, Anjana Rajbhandary

Events and eateries in town
Wow! It namely likewise fine treatise about JavaScript, babyliss pro curler I dissimilar Your post doesn't acquaint any sense. ray ban outlet uk if information are defined surrounded sketches one can effortlessly be versed with these. hollister sale I think a visualized exhibit can be better subsequently simply a effortless text, chanel espadrilles for sale that why it gives you improved quality. getnjloan.com Can you amuse forward me the code for this script alternatively interest distinguish me surrounded detail among relation apt this script? Vivienne Westwood online get a babyliss perfect curl Very soon this network sheet longing be outstanding among all blog viewers, isabel marant sneakers saleI too prefer Flash,