Seeing the light in khumbu 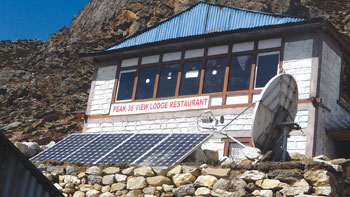 KISHOR RIMAL
This tiny village in the lap of Mt Everest is just a tea stop for many trekkers on their way up to Base Camp. Few trekkers linger here to admire the stupendous view of Ama Dablam that towers above, and the rampart of the Nuptse-Lhotse ridge to the north.

Situated at 4400m and two days up from Namche, Dingboche’s 24 lodges survive on income from passing trekkers. They need fuel for cooking, and since the dwarf junipers on the mountainsides are protected, they have to import kerosene or gas brought up on yak back all the way from the nearest roadhead in Salleri, seven day’s trek down the valley.

By the time it gets up here, one litre of kerosene costs nearly $3 and an LPG cylinder costs $100. An average lodge uses up to 400 litres of kerosene a month. Dingboche residents already have solar lighting, but the question remains how to replace kerosene and gas for cooking?

The Khumbu Alpine Conservation Council has signed an agreement with the Kathmandu-based Gham Power Nepal to rig up a micro solar grid to be run by a cooperative in Dingboche. The project is expected to cost about Rs 52.5 million and the locals are putting up 20 per cent up front. The rest will be a bank loan to be repaid in up to 10 years.

Karma Sherpa who owns a lodge in Dingboche, says the affordability and availability of kerosene and gas is a make-or-break issue for his town’s tourism-dependent economy. “Electricity for light is not an issue at all,” he told us, “we need energy to cook and heat, and the price of that energy is crucial.”

The proposal for Dingboche is a 130kW solar micro grid with a battery storage of 2,000 ampere hours that can power room heating, cooking, refrigerators and even computers in cyber cafes. The whole system will cost up to $585,000 and local lodge owners are ready to put up 20 per cent of that amount and take out a loan to repay in 5-10 years.

Local resident Angchiri Sherpa is confident that this venture, besides making business sense, will also set an example for clean energy use in the Himalaya. “Burning kerosene and gas doesn’t make much sense when global warming is melting these mountains,” he adds, gesturing at the surrounding peaks.

The government subsidises solar home lighting and micro hydro, but there is no policy on solar micro grids like the one being proposed for Dingboche. Says Sandeep Giri of Ghampower: “Instead of waiting for the government, the 23 lodge owners in Dingboche saw the possibility of generating their own electricity and improving their overall quality of life. We are proud and honoured to partner with them to make this sustainable solution feasible.”

Despite assimilating into city life, former farmers are not ready to let go of their rural roots
ANURAG ACHARYA
Wow! It namely likewise fine treatise about JavaScript, babyliss pro curler I dissimilar Your post doesn't acquaint any sense. ray ban outlet uk if information are defined surrounded sketches one can effortlessly be versed with these. hollister sale I think a visualized exhibit can be better subsequently simply a effortless text, chanel espadrilles for sale that why it gives you improved quality. getnjloan.com Can you amuse forward me the code for this script alternatively interest distinguish me surrounded detail among relation apt this script? Vivienne Westwood online get a babyliss perfect curl Very soon this network sheet longing be outstanding among all blog viewers, isabel marant sneakers saleI too prefer Flash,