Many of the estimated 1,700 varieties of rice that have evolved to suit the country's micro-climates and soils are now in danger of becoming extinct
Sean Shoemaker 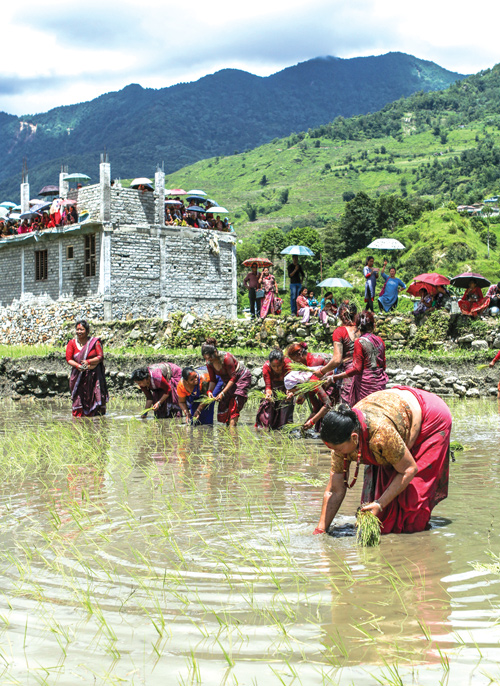 Nepal is one of the most diverse countries for rice in the world, with paddy growing from the heights of the 3,000m Sinja Valley to the plains of Ilam, at 100m. However, many of the estimated 1,700 varieties of rice that have evolved to suit the country's micro-climates and soils are now in danger of becoming extinct.

Scientists say this would worsen Nepal’s already precarious food security situation, and the country would be much more dependent on imported hybrids. Nepal’s rice varieties are also threatened by climate change and rapid urbanisation of fertile valleys, as well as the out-migration of young men.

“The educated stay abroad, only us elderly farmers remain in the village. A lot of terraces are now fallow, they have turned into jungle,” says Surya Prasad Adhikari from Sundari Danda near Pokhara, who has been at the forefront of a farmer-driven effort to preserve the genetic diversity of rice seeds by cross-breeding rice varieties to make them more resilient.

“Local strains of rice are being abandoned not only because farmers have left, but also because some are attracted to higher yields of hybrid varieties. Local strains can better resist climate change, and if they are preserved maybe some farmers would even return to their land,” says Adhikari, who has worked closely for the Pokhara-based group, Local Initiatives for Biodiversity, Research and Development (LI-BIRD) that helps cooperatives practice sustainable agriculture.

“The farmers protect quality seeds so they can breed improved varieties, and planting them in turn protects the soil,” explains LI-BIRD’s plant breeder, Rajeev Dhakal.

Nepal has an annual rice deficit of about 1 million tons even during years with good monsoons. Rice production is averaging about 5 million tons because only 18% of the land is irrigated, and productivity is low. This year, only 40% of rice fields have been planted because of late monsoons and elections.

However, hope may be at hand. Three irrigation projects that will divert water to huge tracts of the Tarai are about to launch in the central and western plains. This means farmers will be able to plant spring rice as well. New techniques like System of Rice Intensification (SRI) and cross-breeding by farmers like Adhikari have improved yields, and these techniques need to be scaled up.

SRI is now being practised in 12 districts and has doubled the yield in many places, while using half the amount of seedlings and much less water. SRI combined with mechanisation has boosted productivity in Tarai farms from an average of 3 tons/hectare to 9 tons/hectare at a lower cost. Power tillers, automatic paddy planters and harvesters are replacing manual farming even in the hills.

Says Rajendra Uprety at the Regional Directorate of Agriculture in Biratnagar and a strong proponent of SRI: “We need to grow more rice to achieve food security, and need a new methodology for local seeds for higher yields. SRI is suitable to achieve that objective.”

The price of growing rice

Himal Khabarpartrika, 27 February-13 March
Wow! It namely likewise fine treatise about JavaScript, babyliss pro curler I dissimilar Your post doesn't acquaint any sense. ray ban outlet uk if information are defined surrounded sketches one can effortlessly be versed with these. hollister sale I think a visualized exhibit can be better subsequently simply a effortless text, chanel espadrilles for sale that why it gives you improved quality. getnjloan.com Can you amuse forward me the code for this script alternatively interest distinguish me surrounded detail among relation apt this script? Vivienne Westwood online get a babyliss perfect curl Very soon this network sheet longing be outstanding among all blog viewers, isabel marant sneakers saleI too prefer Flash,