Nepalis on Thursday witnessed something they had not seen in a decade: both the ceremonial and executive heads of state offering flowers to the statue of Prithvi Narayan Shah 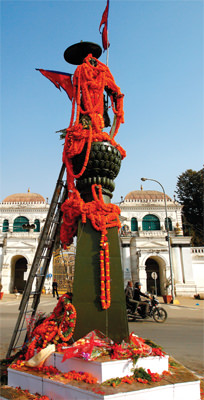 Nepalis on Thursday witnessed something they had not seen in a decade: both the ceremonial and executive heads of state offering flowers to the statue of Prithvi Narayan Shah—a divisive icon loved by many and loathed by some.

Ex-Maoist guerrillas brought down Prithvi Narayan’s statues across the country. They could not topple the one in front of Singha Darbar, so they covered it in a shroud. A section of nationalists opposed what they viewed as the Nepali version of China’s Cultural Revolution, but their voices were ignored.

A decade later, as Maoists prepare to merge with the UML led by nationalist KP Oli, the Sher Bahadur Deuba government has revived Unity Day, giving re-birth to Prithvi Narayan as a unifying figure.

“Prithvi Narayan Shah should not be punished for what his descendants did,” says Nepali Congress Spokesperson Bishwa Prakash Sharma. “He should be respected for giving us a sovereign and unified Nepal.”

But some still resent Prithvi Narayan as a feudal lord, who they say invaded weaker principalities and annexed them to his Gorkha kingdom. They marked National Unity Day as Black Day.

“By reviving Prithvi Narayan Shah’s legacy, politicians have proved they love the status quo, and do not regard our cultural diversity,” says Janajati activist Om Gurung. “They masqueraded as progressive during the April Uprising, but they are now showing their true colours.”

Gurung is hopeful that things will change, and that oppressed people will rise once again to challenge Prithvi Narayan’s legacy. But that looks a far-fetched possibility, as nationalist Oli and ex-revolutionary Pushpa Kamal Dahal intensify closed-door negotiations to create a unified leftist party. They are hoping to rule Nepal for at least five years.

Despite his party suffering humiliating defeats in last year’s elections, Deuba has managed to stay put so far. But his government has already decided to hold the Upper House elections on 7 February, after which Oli is expected to be the new Prime Minister.

Oli’s second innings as PM will not be easy. When UML Chair Manmohan Adhikari became Prime Minister in 1994, he unveiled several welfare programs, a move that benefits his party to this day. But Oli may not be able to follow suit, with the state exchequer depleted and economists warning Nepal may not achieve 7% economic growth.

And, activist Govinda KC, after being arrested for contempt of court and released by the Supreme Court, will be challenging the new government even more vehemently. Oli’s hatred for KC is not hidden, and his nexus with medical businesses, described by KC as mafia, is well-known.

Petrol had only two uses in my village: as fuel for a Chinese lighter, or as balm for aching muscles after a hard days work.
CK LAL
Wow! It namely likewise fine treatise about JavaScript, babyliss pro curler I dissimilar Your post doesn't acquaint any sense. ray ban outlet uk if information are defined surrounded sketches one can effortlessly be versed with these. hollister sale I think a visualized exhibit can be better subsequently simply a effortless text, chanel espadrilles for sale that why it gives you improved quality. getnjloan.com Can you amuse forward me the code for this script alternatively interest distinguish me surrounded detail among relation apt this script? Vivienne Westwood online get a babyliss perfect curl Very soon this network sheet longing be outstanding among all blog viewers, isabel marant sneakers saleI too prefer Flash,