Nepal is blessed with water resources, but cursed by geopolitics 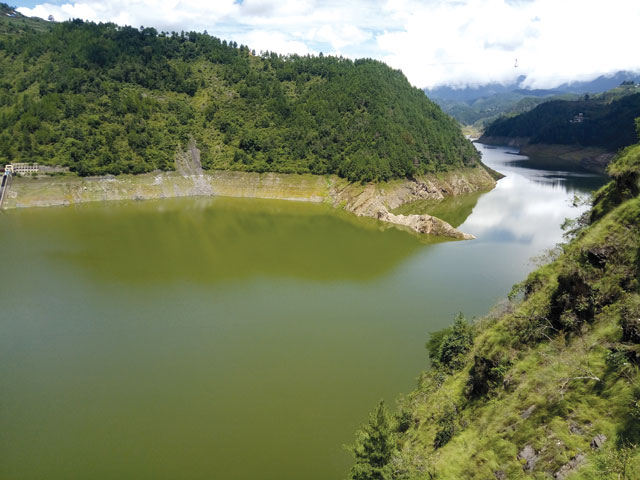 In May, when the last cabinet meeting of the Maoist government awarded a $2.5 billion contract for the 1,200MW Budi Gandaki hydroelectric project to a Chinese company without competitive bidding, it was seen by many as an act of appeasement to Beijing, and a move that could ruffle feathers in New Delhi.

The fact that ex-Prime Minister Baburam Bhattarai, viewed by many as pro-India, demanded the contract be scrapped fuelled speculation that New Delhi indeed did not want the Chinese involved in such a large reservoir project upstream. There is a deep-rooted suspicion that India covets Nepal’s vast water resources resources, and will do anything to prevent China from being involved. This is not a false perception, but some analysts argue it is not necessarily completely right either.

“It is not true that India objects to Nepal implementing storage projects, in fact India is gleefully waiting for Nepal to commit blunders like Budi Gandaki,” says hydropower expert Ratna Sansar Shrestha.

Other experts are in favour of Budi Gandaki because it will generate not just electricity during peak periods, but also control floods and irrigate the Tarai. They also saw other benefits in developing fisheries, inland navigation and tourism.

But Nepal contracted China Gezhouba Group Corporation (CGGC) only to provide electricity generation from Budi Gandaki without factoring in these benefits. The design includes a 263m high dam to generate 1,200MW of electricity creating a 63 sq km reservoir the size of 15 Phewa Lakes, 80km west of Kathmandu.

The dam will displace 3,560 families from 27 villages in Dhading and Gorkha, but it will also augment lean season water flow downstream in Uttar Pradesh, which will benefit from its flood control and regulated flow without India putting in a single paisa.

“India will receive lean season augmented flow without having to compensate for the negative impact of the dam in Nepal,” Shrestha explains. “So why would India sabotage Budi Gandaki or any storage project in Nepal as long as it receives fresh water in the winter without having to pay for it?”

Just like Budi Gandaki, the 750MW West Seti project is being built by China’s Three Gorges Company (CTGC) also only to generate electricity. But in this case, India is apparently not happy – not because a Chinese contractor is involved but because a parliamentary committee directed that Nepal maximise irrigation benefits from West Seti’s stored water for the downstream Tarai.

CTGC itself now has its own doubts about the project since the electricity will not be exported to India as originally planned, and this has delayed construction.

Analysts say India has never really been interested in buying Nepal’s hydroelectricity because it has multiple alternatives to meet its energy needs. In a candid interview with BBC Nepali in 2008, Indian Water Resources Minister Saif Uddin Soz admitted his country was interested in Nepal’s rivers only for flood control and irrigation: electricity would be just a “by-product”.

Nepal’s former Water Resources Minister Dipak Gyawali confirms this: “India wants storage projects to be built in Nepal in a way that meets its needs for fresh water. That was why Pancheswar was delayed.” (See box, above.)

Most experts agree that Nepal needs large Himalayan reservoirs not just to meet its current peak demand for electricity, but also for flood control and dry season irrigation. (Read adjoining Analysis by Bishal Thapa). Run-of-the-river projects meet current demand for now in the wet season, but Nepal will need to build reservoirs to meet its seasonal and daily peak demands. Current supply is only 1,000MW and the present shortfall of nearly 500MW in winter is covered by the import of dirty energy from Indian thermal plants.

The Nepal Electricity Authority (NEA) has forecast peak demand will exceed 4,000MW by 2030. But this projection is based on present growth, and the need could actually cross 5,000MW even today if suppressed demand is factored in.

As long as mega-storage projects are delayed, therefore, Nepalis will not have access to enough domestically-generated hydropower to meet actual energy demand. The dams would also store monsoon runoff for dry season use.

But the building of high dams is complicated by the India-China rivalry, as well as New Delhi's security concerns about high dams in Nepal and its urgent need for flood control and meeting the rising demand for irrigation and household water consumption in the world’s most-densely populated region.

To be able to irrigate food crops for its densely populated states downstream, India has for years been trying to push projects on Nepal’s rivers. But the legacy of historical mistrust from border barrages on the Kosi and Gandaki, which most Nepalis see as unfairly favouring India, has delayed the construction of large reservoir schemes even though they would be beneficial to both countries.

The much-delayed Pancheswar Multipurpose Project is a text-book example of how this mistrust has delayed a project. During his visit to New Delhi in August, PM Deuba agreed to complete the Detailed Project Report (DPR) for Pancheswar within a month. But two months have passed and the project is still stuck because of India’s claim to water flowing through the Lower Sarada Canal, which is the biggest irrigation project in the Indian state of Uttar Pradesh, receiving 151.88 cubic metres per second of water on average in the wet season from the Mahakali, the river that forms Nepal’s western border with India on which the Pancheshwar project will be built. India wants that volume of water retained in the canal even after Pancheswar is finished.

Madhav Belbase, a joint secretary at the Ministry of Energy, has strongly opposed the proposal, arguing that it violates the 1995 Mahakali Treaty and, if agreed to by Nepal, will set a precedent for other rivers. But Belbase is a lone fighter in Nepal’s hydro-cracy, and it is not known how long he can keep his job.

Meanwhile, the clock is ticking. Deuba signed the Mahakali Treaty during his first tenure two decades ago, and it is still in limbo. The Australian company, SMEC, pulled out of West Seti after 15 years of it going nowhere. The Kosi High Dam project is on India’s priority list again, but has been stuck for decades.

From Light to Darkness, Kunda Dixit

Can we start talking now?
RAMESH POUDEL in SANDHIKHARKA
Wow! It namely likewise fine treatise about JavaScript, babyliss pro curler I dissimilar Your post doesn't acquaint any sense. ray ban outlet uk if information are defined surrounded sketches one can effortlessly be versed with these. hollister sale I think a visualized exhibit can be better subsequently simply a effortless text, chanel espadrilles for sale that why it gives you improved quality. getnjloan.com Can you amuse forward me the code for this script alternatively interest distinguish me surrounded detail among relation apt this script? Vivienne Westwood online get a babyliss perfect curl Very soon this network sheet longing be outstanding among all blog viewers, isabel marant sneakers saleI too prefer Flash,