Two years after bloody clashes, Tikapur is trying to bury the past to hold local elections
Shreejana Shrestha in KAILALI 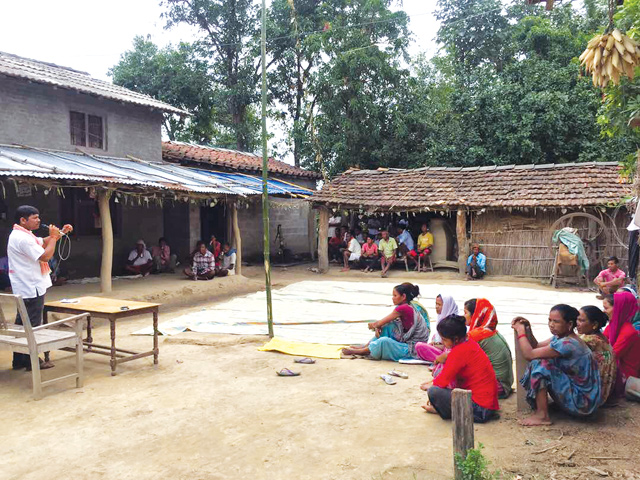 Shreejana Shrestha
A candidate of Nepal Democratic Party campaigning for local elections on Tuesday near where eight policemen were killed in Tikapur two years ago.

Walking through the rustic countryside on the outskirts of Tikapur under gathering monsoon clouds threatening rain, it is difficult to imagine the horror of what happened here on 24 August 2015. Hundreds of protesters carrying spears and knives set upon unarmed policemen, killing eight of them and shooting a baby.

Here, beside a maize field and a small pond, was where Tharu activists chased a policeman, and burnt him alive. Further down the road, they fired on a policeman’s house, killing his two-year-old son.

The country was still in shock after the earthquake, and the government in Kathmandu was trying to ‘fast-track’ the Constitution amidst intensifying protests for self-rule in the Tarai. The fires that were lit here in Tikapur spread across the plains the following months leaving more than 50 dead and leading to the Blockade that ruined the economy. A report later found that four senior politicians had incited the protesters.

There is little to remind visitors of the carnage here as Tikapur Municipality prepares to elect its own local government in elections next week. The candidates are all in campaign mode, and Tharu leaders say their ultimate goal is still autonomy in a separate Tharuhat province, made up of parts of Kailali and Kanchanpur districts from Province 7 to be grafted into Province 5, where Tharus will make up 40% of the population.

The violence deepened the divide between Tharus and hill settlers like never before, but it appears that most people are trying to forgive, forget and re-establish social harmony by participating in the election on 28 June.

“The situation is completely different when everyone is preparing for the local election. People have already forgotten what happened here two years ago,” says Bhim Bahadur Raji, an eyewitness to the lynchings.

Publicly, all of the candidates are saying the right things: they will ensure the rights of Tharus and restore social harmony. They’re also confident that voting will be peaceful.

Local MP Janak Raj Chaudhari sees the polls as an opportunity to bridge the gap between Tharus and Pahadis. “We are still fighting for an autonomous Tharuhat state, but we don’t want that to intrude on the local election,” says Chaudhari, who is also State Minister for Federal Affairs and Local development.

Campaigning on Tuesday near where the policemen were lynched two years ago, local MP Janak Raj Chaudhari says the election is an opportunity for Tharus to increase their access to state power. Nepali Congress candidate Jung Bahadur Saud was going door-to-door in a Tharu community, while the UML candidate was addressing a gathering nearby.

The UML’s Bhim Rawal, whom many Tharus blame for opposing the demand for a Tharuhat province, addressed the gathering in Tikapur. Home Minister Janardan Sharma and IGP Prakash Aryal flew in on Tuesday to observe the security situation. 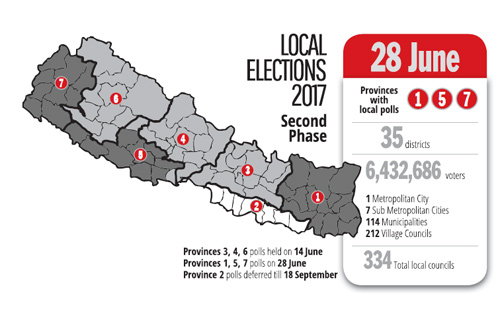 Following the Tikapur incident, police detained at least 25 Tharu leaders, including Laxaman Tharu who is still in jail (see box below). Many other accused, including Resham Chaudhari, fled to India. Despite that, however, he was awarded Rs 17 million in compensation, causing outrage in the media. The government compensated hill families whose houses were set on fire, even though many homes of Tharus were also destroyed in the counter-violence after the killings.

Tharu leaders maintain that many of those detained are innocent, and that police stood by while supporters of an undivided Far West province ransacked their houses during the curfew that followed the violence.

“We never wanted a divide between Pahadis and Tharus so we are participating in the local polls,” says Dinesh Tharu of the Nepal Democratic Party. “But we will keep fighting for a separate state based on our identity.” 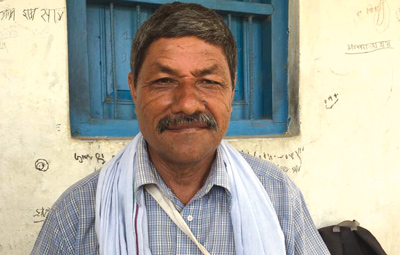 “I have already been VDC chief of Dhansinhapur (now in Tikapur municipality) thrice. I was able to win because of votes from Tharus and I am sure Tharus will vote for me this time too. The Tharus and Pahadis are living in harmony. My main agenda is to lift living standards of the under-served, including Tharus, with my One House One Job campaign.” 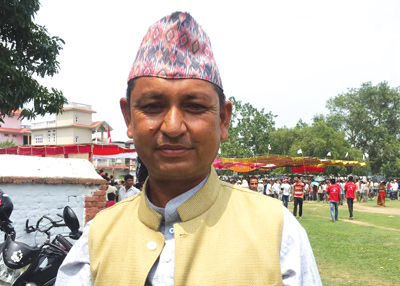 “The Tikapur incident is a thing of the past. It hasn’t affected this local election, everyone is actively participating. Our country and people should not be divided on the basis of caste and ethnicity. The Tharuhat protest is over, Tharus and Pahadis live side-by-side here. I will make both Tharu and Nepali official languages of Tikapur.” 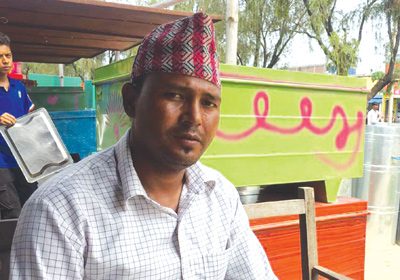 “We will work to restore communal harmony in Tikapur. We will provide free medical treatment to Tharus who suffer from sickle-cell anaemia, empower farmers, focus on development, promote tourism and relocate the landless.” 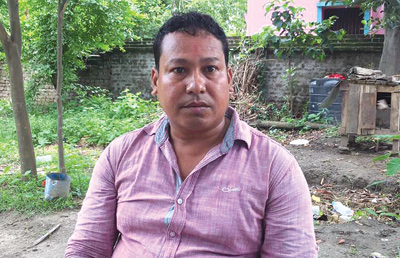 “Our demand for an autonomous Tharuhat state remains, we are fighting for identity and equality by taking part in elections. Putting Kailali and Kanchanpur in Province 5 is still possible through a constitutional amendment and I will push for it once I am elected mayor. If these districts are kept in Province 7, our population will come down to 3% from 40% and we will lose our identity.” 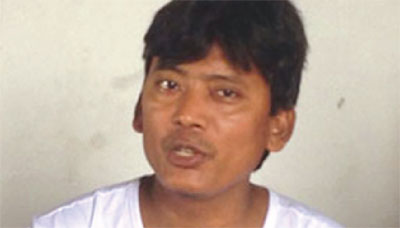 Laxman Tharu, the most prominent Tharuhat leader, is now in a jail in Kailali for allegedly being behind the Tikapur massacre. He pled not guilty, and is awaiting withdrawal of the charges against him as part of a deal between the government and Madhes-based parties in Kathmandu. Tharu spoke to Nepali Times from inside the prison this week.

Nepali Times: Would you have participated in local elections if you were not in jail?

Laxman Tharu: Yes, I would have. Even from inside the jail, I have urged Tharuhat leaders to contest local elections and fight for the rights of the Tharu community.   Where is the Tharuhat movement now?

The state suppressed our movement. Most of our influential leaders were arrested after the Tikapur incident, and no one is left to lead our struggle.
What is next?

I will no longer fight for a separate Tharuhat province. We were inspired by other ethnic rights movements to demand an autonomous Tharuhat state. But I don’t think that is possible now. Instead, I will keep fighting for justice and equality for the Tharu community.

Ghost town in the Annapurnas

Letter to the editor in Kantipur, 9 August

Editorial in Samaya, 13 August
Wow! It namely likewise fine treatise about JavaScript, babyliss pro curler I dissimilar Your post doesn't acquaint any sense. ray ban outlet uk if information are defined surrounded sketches one can effortlessly be versed with these. hollister sale I think a visualized exhibit can be better subsequently simply a effortless text, chanel espadrilles for sale that why it gives you improved quality. getnjloan.com Can you amuse forward me the code for this script alternatively interest distinguish me surrounded detail among relation apt this script? Vivienne Westwood online get a babyliss perfect curl Very soon this network sheet longing be outstanding among all blog viewers, isabel marant sneakers saleI too prefer Flash,