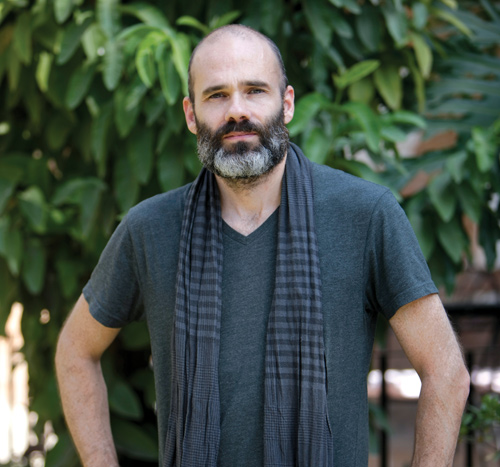 At one of numerous talks he gave at an international festival of photography in Patan this week, Patrick Witty projected a slide of slides and asked: “Who knows what this is?”

On the screen was an image of a stack of Kodachrome slides with a black stripe down one side. The fact that there were some younger Nepalis in the audience who didn’t know what a slide was and that the black stripe was for the picture editor to figure out the right side proved how far and fast photography has come in the digital age.

“As a picture editor, I have tremendous respect for photographers who risk their lives to get the perfect image,” Witty said, “it is the photographs that make a story come alive.”

Six months as an intern in National Geographic in 1996, while sorting and stacking slides from world renowned photographers, Witty developed a keen eye for the visual and photography became his life.

Twenty years later,  Witty has come a full circle and is back at National Geographic overseeing the digital end of things, after having worked at the New York Times, Time magazine and WIRED.

“It’s been an amazing journey. It feels like the right place to be at the right time for me,” he said during his three-day workshop for Nepali photographers and editors at the Photo Kathmandu festival where he was also kept busy with portfolio reviews, an artist talk, networking events.

“As a photo editor you are the voice for photo journalists,” said Witty, who has himself travelled to Greece with photographers like James Nachtwey to do his own digital storytelling on Instagram of the arrival of refugees.

Witty’s career has also spanned the evolution of technology in photography. While at New York Times and Time Magazine he curated photo stories from conflict zones, designing cover stories and doing shoots. His last job before joining National Geographic was at WIRED, where his most exciting project was to travel to Moscow with an entire studio for a cover story on Edward Snowden.

Experimenting in different platforms has been one of Witty’s strongest traits, but what sets him apart is teamwork: the ability to collaborate with photographers, he believes in fostering long term relationships with them.

Having worked with NYT’s Michelle Magnelli and award winning photographers like Nachtwey and Eugene Richards, all of whom have had a big influence in his career, Witty says he is always amazed by the impact of photography through the media.

“A photograph can compliment text and tell stories, it can really elevate the stories. They are not competing, they are complementing each other,” he said.

As someone who has spent most of his career working for the print media, the transition to digital was not as difficult as he had imagined. In fact, for Witty digital platforms and new sites like Instagram and Facebook expand the viewership and audience of traditional media enormously and allow multimedia story-telling.

“Print will always be special and matter but being able to tell stories digitally, you can reach such a broader audience so much faster,” he said. Adding that from what he has seen, Nepali editors have not yet explored the full potential of the visual.

“Whenever photographs are crammed into space or used to fill gaps you are missing an opportunity to tell strong stories better,” he said.

Deshantar, 9 July
Wow! It namely likewise fine treatise about JavaScript, babyliss pro curler I dissimilar Your post doesn't acquaint any sense. ray ban outlet uk if information are defined surrounded sketches one can effortlessly be versed with these. hollister sale I think a visualized exhibit can be better subsequently simply a effortless text, chanel espadrilles for sale that why it gives you improved quality. getnjloan.com Can you amuse forward me the code for this script alternatively interest distinguish me surrounded detail among relation apt this script? Vivienne Westwood online get a babyliss perfect curl Very soon this network sheet longing be outstanding among all blog viewers, isabel marant sneakers saleI too prefer Flash,