Seismologists had predicted that the first structures to collapse in a big earthquake in Kathmandu would be the new highrise apartments. They would not be able to withstand the shaking and the danger of liquefaction, was the general refrain.

As it turned out, while temples and ancient monuments crumbled and brick clay mortar homes collapsed, none of the new highrises came down. A few were badly damaged, others developed cracks, but most of Kathmandu’s tall apartments were intact and some of its residents are not moving out. 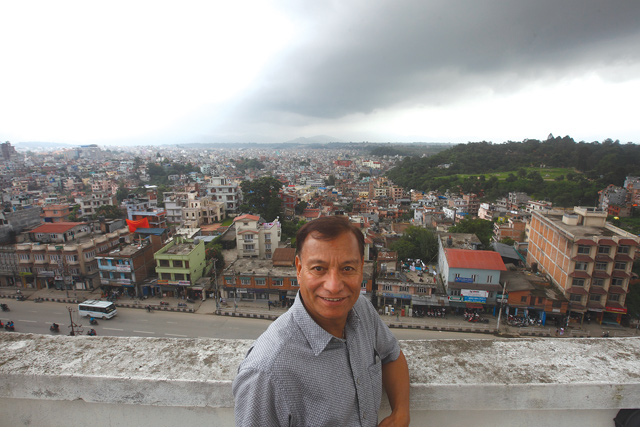 Some, like retired Brigadier General Keshar B Bhandari (pic, above) has decided to stay put in his eighth floor apartment at Ambe Residency in Chabahil. Every room in the flat offers a glorious view of Pashupatinath temple, and on a clear day one see right across the Valley and the snow peaks beyond from the balcony.

“Very few families in the building moved out after the earthquake, and even those who did, returned,” says Bhandari. Families in the first three floors are waiting for maintenance to be completed before they come back.

For the Bhandari family, the view is not the only attraction. Apartments offer better facilities, security and privacy. The buildings are also better engineered than some of the shoddy blocks that flout the building codes. Which is why he decided to rent out his house and move into his high rise apartment.

When the earthquake struck on 25 April, the first three floors of the two towers sustained moderate cracks on the walls but Bhandari’s apartment was unscathed. After an assessment confirmed the structure, columns and beams looked fine, most of the families in the two towers moved to the lobby for a few days and then back up to their flats despite the aftershocks.

The Bhandaris have no intention of moving out of their top floor apartment any time soon, “We feel safe here, and there is hardly anything to worry about,” says the retired army officer.

Nita Karki, 49, has been living on the seventh floor at Sunrise Apartment in Dhobighat for the past five years. She returned to her apartment a week after the earthquake because she felt safer there. “When I came back there was no one else in the building but now up to 40 families have returned,” she says.

After the earthquake the 12-storey building was given a yellow sticker by the government’s assessment team, but Karki who lives with her husband, son and daughter-in-law, says the cracks were not structural.

“A few cracks here and there is normal when an earthquake happens,” says a sanguine Karki. “The main thing is that the building did not collapse and no one was hurt.” Now, there are other families who have never lived in high rises before who want to rent and buy flats in the apartment building.  That is why Abiral Pant, 24 isn’t too worried about finding tenants for his family’s apartment at Imperial Court in Sanepa.

The family bought the apartment on the fifth floor of the 17-storey building two years ago and was setting it up when the earthquake struck. Now even his parents want to move in.

At Sterling Apartment in Jhamsikhel where most owners had rented out flats to expats, the tenants have moved out. But there is such a shortage of housing in Kathmandu now that there are plenty of others who want to take their place.

To be sure, there are apartments with red stickers where residents are still not allowed to return. Few are being repaired and still wear a deserted look. And some families are still spooked.

Anjela Baidya’s family moved out of their sixth floor apartment in Metro Apartments in Kuleswor after the earthquake. They are now living in their house in Jawalakhel. The Baidyas had been away at Hetauda when the earthquake happened. They returned to their flat to find the floor covered in shattered glass and the dog cowering under a table. Their fifth floor flat in Oriental Apartment Phase II suffered more damages.

Bishwadeep Aryal of Roadshow Real Estate says there is no reason for the people to be deterred from living in the high rises provided the builders pay special attention to safety. “Given the rapid population growth in the Valley, going vertical is the only way to accommodate more people in less space,” he says.

Roadshow’s Bhatbhateni Apartment was one of the six high rises to be given a green sticker, but he says its understandable that people are a little hesitant to invest in apartments right now. But he expects demand to pick up. He adds: “Although we haven’t officially opened bookings for the second phase of Bhatbhateni Apartments, none of the people who had expressed their interest before the earthquake have backed down.”