No homes no water 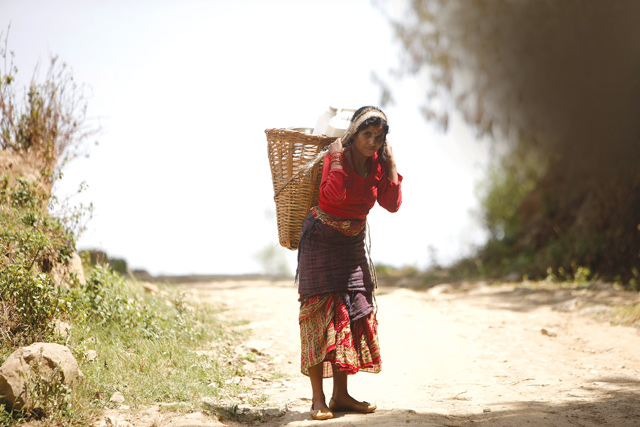 WATER WOES: Nirmala Adhikary, 45, has to walk an hour every day to fetch water since the spring near her home dried up after the earthquake.

The earthquake spared most of the houses in the village of Dapcha 2 hours drive east of Kathmandu, but took away another essential commodity: water.

Since the earthquake last April, 15-year-old Purnima Adhikary’s daily routine involves waking up before dawn to walk half an hour to one of the few functioning taps in the area. There, she has to wait three hours for her turn to fill her jar. She has to hurry back home to get ready for school.

On weekends, Purnima spends anywhere up to five hours a day just collecting water for her family.  Some of the springs near her home used to dry up in the dry season, but after the earthquake none of them have water.

Geologists say earthquakes often shake up subterranean rock strata which store water, and this affects the springs. Santosh Nepal, a water expert at the International Centre for Integrated Mountain Development (ICIMOD) explains: “During the earthquake, the displacement of land surface also disturbs the groundwater storage. As the land gets squeezed in some places (resulting more water from springs) whereas it expands in other areas (resulting less water from springs). Similarly, the interconnected water pathways below the surface get disrupted and water changes course. The water scarcity during this dry season has been made exaggerated by the earthquake.”

A study in Kavre District by Nepal Water Conservation Foundation (NWCF) and ICIMOD showed that out of 26 springs monitored, ten have dried up completely after the earthquake.

“Immediately after the earthquake some springs yielded more water, but now the flow even in those springs has dropped compared to previous years and some have dried up completely,” says nepal. Binod Sharma of NWCF says it is important to revive ponds, restore vegetation so groundwater is recharged.

In Dapcha, the water level of Darauni Pokhari, which serves as the recharge pond for many springs in the area has fallen drastically. The flow of Thulodhara on which 200 households depend, has also come down, and locals say they don’t remember the water level being so low before. 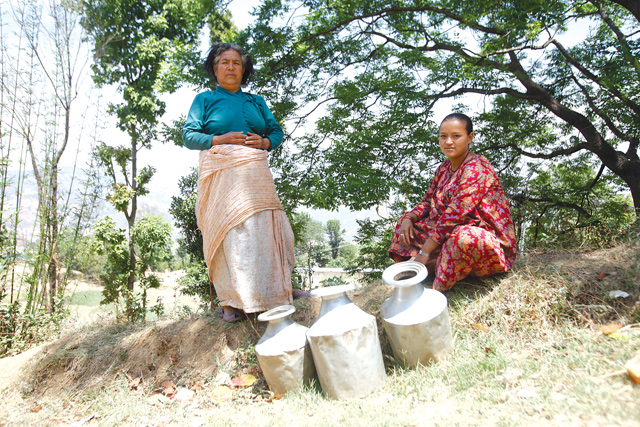 Pics: Bikram Rai
Gyanu Maya Shrestha with her 24-year-old daughter Sanju rest this week in Kavre on thier way to get water half an hour from home.

“I waited three hours to fill up my containers,” says Sarita Shrestha of Hatiya, who came to collect water at Thulodhara after a tap closer to home dried up. “Even here, the water flow is half of what it was last year this time.”

The water shortage has increased the drudgery for women who have the task of fetching water in most families here. It has also affected their health.

“Almost all of the women here suffer from back aches and some have even had prolapsed uterus,” says Sharmila Adhikary, 30, a health post worker here.

Vegetable farmers like Sushila Adhikary are also affected. She lost Rs 5,000 when cauliflower seeds she had sown died because of the lack of water.”There was no water, I wasted my money, labor and time for nothing,” says the 31-year-old.  For students like Purnima who wants to be a nurse, having to fetch water from a faraway source means less time for studies.

In Thokarpa of Sindhupalchok springs have gone dry in five out of nine wards, and villagers are selling off cattle and migrating.  “One of my neighbours moved to Kathmandu with the entire family this morning,” says Kusha KC of local Mothers group in Gaurigaun, “another one gave away her cattle because there is simply no water even for humans.”

In both Kavre and Sindhupalchok, there have been incidents where locals of one village have refused to give water to people from another, and women have got into fights over water. Villagers wake up at midnight to collect water and avoid confrontation.

Water, please!, From the Nepali press

The bond between our children and their grandparents, the same thing that gave the Cro Magnon the edge over their ugly Neanderthal neighbours, is ignored.
DANIEL LAK

Nation in favour of Maoist proposal

Profits all the way for NOC