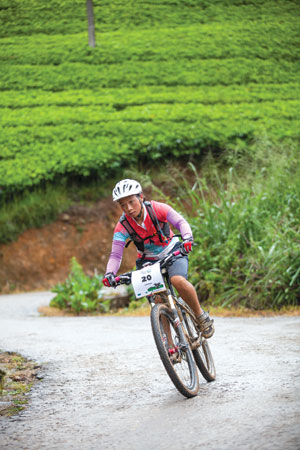 Two Nepali riders, national champion Ajay Pandit Chhetri and Laxmi Magar, took part in the Sri Lankan Airlines Rumble In The Jungle in Sri Lanka from 19-22 November, performing well and putting Nepal on the international mountain biking map. They were sponsored by Yak Attack, the mountain bike stage race around the Annapurna Circuit in Nepal, considered one of the toughest races in the world.

Over the past year Yak Attack has worked on creating a World Series of races spanning multiple countries, and the Sri Lankan race was the latest.

The field of racers for the first Rumble was stacked with talented riders all vying for a generous cash prize. The field included Cory Wallace, the Canadian Marathon Distance National Champion, Ismael Ventura the Spanish Cross-Country (XC) National Champ, and Yuki Ikeda a strong Japanese rider with many top results under his belt including runner-up in this year’s North Face Yak Attack. Chhetri, racing in new territory would face a tough challenge, and the women’s field was equally tough.

Rumble presented a unique challenge to the riders from heat (37 degrees) to jungles and river crossings, to massive climbs that reached heights of more than 2,000m to the interior of Sri Lanka.

After a flat start, Day 1 threw riders into the jungle with undulating roads and river crossings. After 52km the racers were greeted by a 13km climb leaving the jungle at 400m and finishing the day at 1,300m. Spaniard Ventura rode hard to a 23-minute lead over the field. Ikeda was 2nd with Nepal’s Chhetri close behind in 3rd.

Day 2 with only 60km and less climbing was supposed to be an easier day but with 1,900 meters of climbing it was challenging. Ventura again won the day, with Cory Wallace not far behind. Ajay finished a consistent 3rd place moving him up to 2nd overall based on time. 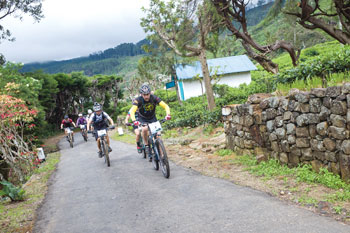 Day 3 was the toughest day of the race. Starting with a 16km, 1,300m climb up to 2,100m the day then proceeded to an amazing trail that had been opened that day only for the riders. The single track descent was epic, with some racers crashing hard along the way. Cory Wallace found his form during the day and finished just in front of Ventura, moving into 2nd overall. Chhetri, ever consistent, was 3rd on the day just ahead of Ikeda continuing their year long battle (Ikeda finished just ahead of Chhetri in the World Championships).

Day 4 was mostly a downhill and the top four finished in the day in the same order as the overall results.

In the women’s race, Yak Attack veteran, Sonya Looney Ewonus came on top in the stacked field. Laxmi Magar, representing Nepal, while not able to finish on the podium gained valuable experience to continue building her promising mountain bike career.

“For a first time race, Rumble in the Jungle was one of the best organised races in South Asia. It was perfect terrain and landscape for mountain biking, almost like the Himalayas without the altitude. The long climbs, tea gardens, and amazing trails made for an amazing race. The people in Sri Lanka were very friendly and helpful as well,” said Chhetri

Yak Attack’s next race ‘Alpac Attack’ is in Patagonia next April, promising to be a beautiful and challenging addition to the race series. The growth of Yak Attack from a small stage race in Nepal to an internationally acclaimed stage race with a growing global series is impressive and offers promise for Nepal’s bikers.

Yak Attack has been a boon to mountain biking in Nepal and more importantly the top national riders. It has offered low-cost entry fees and arranged entry sponsorships for the Nepali riders, helping send two to the Asian Championships and funded three of the national team members for the UCI Marathon World Championships.

Smallholder farmers can boost sustainable agriculture and economic growth
KANAYO F NWANZE
Wow! It namely likewise fine treatise about JavaScript, babyliss pro curler I dissimilar Your post doesn't acquaint any sense. ray ban outlet uk if information are defined surrounded sketches one can effortlessly be versed with these. hollister sale I think a visualized exhibit can be better subsequently simply a effortless text, chanel espadrilles for sale that why it gives you improved quality. getnjloan.com Can you amuse forward me the code for this script alternatively interest distinguish me surrounded detail among relation apt this script? Vivienne Westwood online get a babyliss perfect curl Very soon this network sheet longing be outstanding among all blog viewers, isabel marant sneakers saleI too prefer Flash,