Monks and nuns to the rescue

It was the last day of a series of pujas at the Shechen Monastery in Boudha. Thousands of monks and devotees participating in the prayer ceremony were in the courtyard when the ground started shaking just before noon on 25 April.

Immediately, the monks jumped right into action: managing the crowd to prevent a stampede, bringing those inside the main temple out into open spaces, and trying to calm those who were panicking. 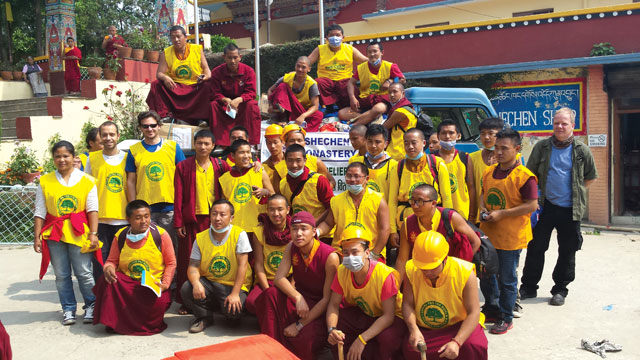 Had it not been for their maroon robes, the monks could have easily passed off for professional rescue workers. The reason was that the monastery had conducted training in first aid, rescue operations and emergency preparedness precisely in case of an earthquake. The monastery also had a stockpile of emergency supplies and pre-positioned rescue equipment and dry foods, blankets, first aid kits, and even loud speakers, which came in handy that day.

“We always knew such a day would come and were prepared accordingly,” says Khenpo Shelnang, who has been leading the monastery’s relief efforts.

Like many other organisations involved in relief and rescue, Shechen’s monks also faced bureaucratic hassles. Obtaining the required paperwork for relief delayed and deterred many motivated monks and nuns who had visited the villages, seen the destruction and wanted to help as soon as possible.

“Every day I had to have three sets of answers ready: for the volunteer monks, for the donors and for the people requesting relief, explaining why help couldn’t be sent,” explains Shelnang.

Even though Shechen Monastery’s main temple suffered damage it has provided shelter and food to residents of Boudha who have lost their homes. Few families from Rasuwa have also camped here and the monastery has been working with its sister organisation, Shechen Clinic and non-profit Nepal Share for relief work.

The monastery’s relief has also gone high tech out of necessity. After finding that the situation presented in request applications didn’t always match that on ground, the monks now use Quick Maps to do their own research, process paperwork and prioritise villages for relief.

Other monasteries in Kathmandu and the affected districts have also sprung into action, and fortunately donations have poured in from all over the world.

Young monks of Kopan Monastery donated one of the two blankets they owned, and nuns of Thangu Tara Ani Gumba set up first aid clinics for locals in its only remaining building.

The Buddhist Philosophy Promotion and Monastery Development Committee (BPPMDC) estimates that around 1,500 monasteries in Central Nepal collapsed completely and hundreds of monks and nuns are reported to have died.

“We are all victims: some of us are still in shock but as we got more information of the damage caused outside Kathmandu, we knew we had to go out and help,” said Tulku Urgen Dorji, who travelled with relief supplies to villages in Nuwakot and Gorkha.

Despite the war, Nepalis are still going to work in the Gulf. And they could benefit from a post-war reconstruction boom.
BHAGIRATH YOGI

"The king has been honest"

Hope your next life is better than this one
BERNHARD LAZAREFF
Wow! It namely likewise fine treatise about JavaScript, babyliss pro curler I dissimilar Your post doesn't acquaint any sense. ray ban outlet uk if information are defined surrounded sketches one can effortlessly be versed with these. hollister sale I think a visualized exhibit can be better subsequently simply a effortless text, chanel espadrilles for sale that why it gives you improved quality. getnjloan.com Can you amuse forward me the code for this script alternatively interest distinguish me surrounded detail among relation apt this script? Vivienne Westwood online get a babyliss perfect curl Very soon this network sheet longing be outstanding among all blog viewers, isabel marant sneakers saleI too prefer Flash,