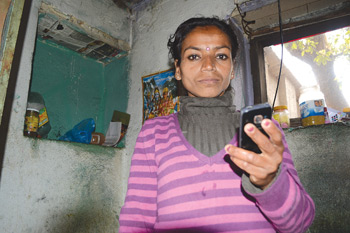 JUANITA MALAGON
Paru and Lila have many things in common: they are young women from remote parts of Nepal, they have children. And they are both widows.

They also own mobile phones, a device that has transformed the lives of single mothers who are often ostracised by families and rejected by society.

A woman may not have to jump into the funeral pyre when her husband dies anymore, but she is required to mourn her husband endlessly and never remarry. Many don’t have access to property, have difficulty obtaining birth certificates, citizenship cards, and proof of relationships for their children. Single women are vulnerable to abuse and sometimes denied access to their own children by the husband’s family.

Paru who is from remote Bajura district was married at 14. Her husband escaped to India to avoid forced recruitment into the Maoist army, but died two years after their marriage, leaving Paru to raise their son who is now 10 years old. After her husband died, her in-laws began to mistreat her. She couldn’t leave the house, attend religious functions, and was even banned to talk to anybody, especially men. “When people see a young widow they naturally assume that she will remarry and run away with the property with the new husband,” Paru told us over her mobile phone.

The 26-year-old says she now contacts other widows like her over the phone and provides them with counselling. By renting her phone to neighbours who pay per call, she has also been able to generate a small income. Her financial independence has earned her new respect in the community. Today Paru and many other widows like her have mobile phones donated by Women for Human Rights (WHR) which provides widows in districts like Bajura, Dadeldhura, Palpa, Sankhuwasabha, Saptari, Sindhuli and Kavre with mobiles.

Lila B(pic) used to work on a construction site in Bardibas in the eastern Tarai with her husband until he died. Alone with small children, and with no means to raise them, she moved to Kathmandu and found a cleaner’s job. Lila doesn’t want to talk about her past and gives short answers and changes the subject when asked about her life. But she is proud now to have her own mobile phone, and says it has helped her keep in touch with friends. 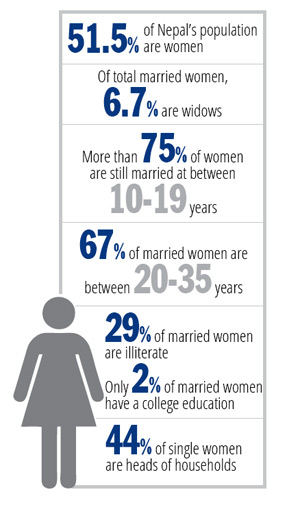 Nepal’s mobile penetration rate has grown to 75 per cent from barely 30 per cent in just five years. WHR hopes to expand its pilot project to distribute donated cell phones to more women like Paru and Lila for whom a mobile is not a luxury but a device that gives them a sense of belonging and empowerment through the ability to communicate.

“Owning a mobile phone helps single women become independent, start a business and be a part of the community,” explained Shreejana Kafle, a social worker with WHR. Lila lives alone with her two young daughters in a tiny rented room that has a stove, a double bed and a small wardrobe. But her most prized possession is her old Nokia. She says: “I’m able to listen to music, take pictures of my children, and call someone if something happens to me.”

An open letter to the Big Guys

We young MPs must rise above the party line and remember that we, too, represent the people
SUNIL B PANT

"We haven't the time to take our time."
SUPRIYA SHARMA
Wow! It namely likewise fine treatise about JavaScript, babyliss pro curler I dissimilar Your post doesn't acquaint any sense. ray ban outlet uk if information are defined surrounded sketches one can effortlessly be versed with these. hollister sale I think a visualized exhibit can be better subsequently simply a effortless text, chanel espadrilles for sale that why it gives you improved quality. getnjloan.com Can you amuse forward me the code for this script alternatively interest distinguish me surrounded detail among relation apt this script? Vivienne Westwood online get a babyliss perfect curl Very soon this network sheet longing be outstanding among all blog viewers, isabel marant sneakers saleI too prefer Flash,