As the Indian blockade enters its fourth month, the shortage of fuel and  daily commodities has brought life to a standstill all over Nepal. People  want to know what is happening, so they buy newspapers but the  newspapers themselves have been hit by the crisis.

Newspapers have got more readers, but less revenue because  advertising has collapsed with the economic slowdown caused by the  blockade. Combined problems of circulation, distribution and  advertisement are dragging media companies, which had just started to  recover from the April earthquake, down into an even deeper crisis. 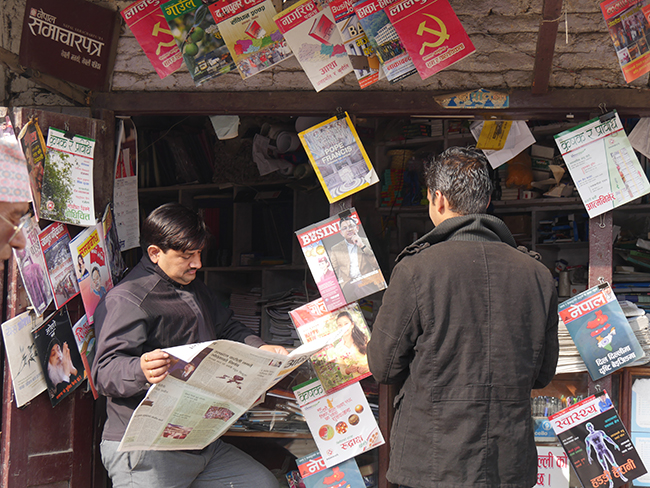 “I sell more newspaper during periods of political turmoil,” says Jeevan  Maharjan who runs a shop selling office supplies and newspapers in  Patan, citing Naya Patrika as a broadsheet that has increased its  circulation by more than half since the crisis began.

Maharjan says the taxis queuing for fuel on the street outside are his best  customers. Indeed, taxi driver Prem quips: “I buy a newspaper everyday  now just to find out if there is an end to this crisis.” 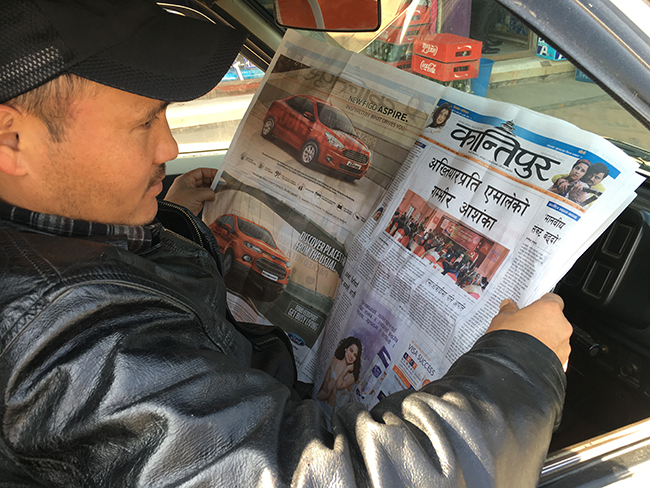 Prem waiting for customers in his taxi with broadsheet newspaper.

Even though readership has gone up, newspapers face problems in  increasing their print runs because of the shortage of newsprint, raw  materials, diesel for generators and distribution vans.

Ram Bhattarai, the Circulation Chief of Naya Patrika, added that there are  also problems getting his daily to areas affected by unrest in the Tarai like  Lahan and Rajbiraj. “Transportation and delivery have become a problem  to reach our readers,” he says.

Delivery boys who used to take newspapers house–to-house have also  been hit by the fuel shortage. Santosh Aryal, Circulation Manager at  Himalmedia, says he has replaced motorcycles with bicycles, but it is still  difficult to reach all customers in time. 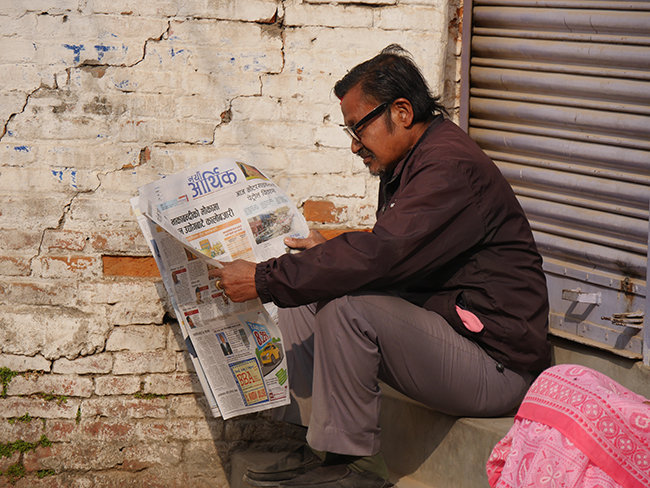 Most national broadsheets like Kantipur, Nagarik and Annapurna Post  have shrunk to 12 pages or less, and their content is almost devoid of  ads. One media manager told us his publication had lost 60 per cent of its  revenue from advertising and news-stand sales.

Syakar Trading, which sells Honda motorcycles and cars in Nepal, has  stopped all advertising due to the drop in sales, and also because it hasn’t  got new units from India because of the blockade.

“Simply put, we don’t have anything to sell,” Saurabh Jyoti of Syakar tells  Nepali Times, “and even the raw materials for our other industries like  agriculture, tractors, equipment, medicines are stuck at the border. So  there is no point in advertising.”

One of Nepal’s largest advertising agencies, J Walter Thomson Nepal is  also feeling the pinch with business almost down to nil, according to  Managing Director Joydeb Chakravarty.

“No one is buying non-essentials,” he says, “if it is so difficult to find fuel for  a motorbike, why would you want to buy a new motorbike?”

Companies like Unilever which manufactures in Nepal and aims at both  domestic and international market may suffer more intensely, for their  business relies heavily on imports of raw materials and exports of  products. The suspension in production and decline in sales also forced  Unilever to stop advertising two months ago.

Chakravarty explains: “All major advertisers have stopped  advertisements because consumer sentiment is down. No one wants to  spend.”

Health care delivery has worsened because of the conflict
IAN HARPER
Wow! It namely likewise fine treatise about JavaScript, babyliss pro curler I dissimilar Your post doesn't acquaint any sense. ray ban outlet uk if information are defined surrounded sketches one can effortlessly be versed with these. hollister sale I think a visualized exhibit can be better subsequently simply a effortless text, chanel espadrilles for sale that why it gives you improved quality. getnjloan.com Can you amuse forward me the code for this script alternatively interest distinguish me surrounded detail among relation apt this script? Vivienne Westwood online get a babyliss perfect curl Very soon this network sheet longing be outstanding among all blog viewers, isabel marant sneakers saleI too prefer Flash,