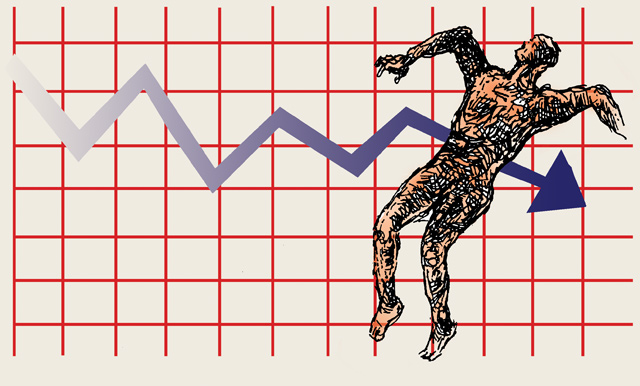 After Kali Gandaki–A added 144 MW hydropower to the national grid in August 2000, NEA had a surplus of electricity. The Nepali Times had just started, and an NEA official was quoted in the #102 edition of  August 2002 as saying: “We have to trade the surplus that has started to accrue in the system.”

Needless to say, the euphoria over surplus electricity was short-lived.  The NEA could not meet the rising electricity demand, the conflict and mismanagement delayed new projects, and heavy loadshedding started in earnest in 2006.

Nearly a decade on, power cuts have become such a part of life that no one bats an eyelid when the lights go out even during important functions. Last week, the government unveiled a plan to restrict load-shedding to eight hours a day in the winter of 2015 – and it touted it as if it was a major achievement.

Hydropower is just the most glaring example of governance failure in infrastructure in the past 15 years. Most development projects that were launched in or before 2000 are still incomplete or suspended, and we are now forced to deal with a string of shortages: from energy to water and food.

These failures are all the more glaring because Nepal has actually made dramatic progress in reducing the poverty rate, improving maternal and child health and school enrollment. But when it comes to economic indicators, the years between 2000 and 2015 were worse than ever before.

Govinda Raj Pokhrel of the National Planning Commission says the last 15 years were disastrous in terms of economic indicators. “It is as if we are now stuck where we were two decades ago,” he told us in an interview this week. “Progress in social indicators is probably the only thing which we can be proud of.”

Annual economic growth is down to barely 3 per cent, and manufacturing’s share of the GDP is 6 per cent. The decline in manufacturing is due to low investment, which translates into fewer jobs and contributes to the outflow of able-bodied migrant workers.

One of the factors that took Nepal down was the Maoist conflict. Not only did the war kill 17,000 Nepalis from 1996 to 2006, but also destroyed physical infrastructures, scared away investors and forced the youth to migrate abroad.

“The war’s economic cost was so high that we are still struggling to overcome it,” Pokhrel said.

When the Nepali Times was launched in July 2000, it looked like the Melamchi project was finally going to be completed. In December that year, the Asian Development Bank approved a $120 million loan for the project to bring in fresh water through a 26km tunnel to Kathmandu. Fifteen years later, the tunnel isn’t even half complete.

Meanwhile, Kathmandu is heavily dependent on tankers for water supply. Once a self-sufficient in food, Nepal is now importing rice and other staples to feed its people. We have built transmission lines to not export electricity, but to import from India.

Nevertheless, preparations to pass a new constitution next month have raised some hope that political stability will once more restore economic growth and investment. But the constitution is in itself no panacea if political leaders continue to behave as they have for the last 15 years: fighting over turf and appointment, politicising everything from education to health, and neglecting the economy.

There has to be a whole new way to politics and governance if we are to graduate as planned from the status of a Least Developed Country (LDC) by 2022.

Deuba would do well to rejoin his parent party

No recruitment problem in Bardiya

Many support the Maoists out of fear, but here there is no choice