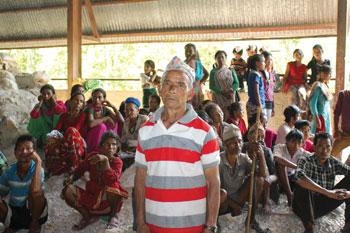 ALL PICS: NARESH NEWAR
INHERITANCE OF LOSS: Survivors at a relief centre in Lamosangu seek shelter in a storage shed .
Ram Thami, 50, was overjoyed at being a grandfather twice over. It was just before midnight when his daughter gave birth to twin sons, and he called relatives and friends on their mobiles to tell them the good news. Four hours later, the mountain fell on their village. Thami, his daughter and the newly-born twins were taken away in their sleep.

The Thamis were among 145 people killed in the Bhote Kosi landslide on 2 August that swept away the villages of Jure, Itini and Kaguni, and blocked the river. More than half the victims were women – the result of the outmigration from Nepal’s mountain districts of men in search of work.

Among the dead were 50 children, 28 of whom were students at the Bansagu Secondary School, which was well known as a model for other schools in the area. Scattered half-buried amidst the rubble of the landslide are bits of the distinctive green-painted exterior wall of the school building.

Nearly two weeks after the disaster, the stench of rotting flesh is overpowering. The rescuers have stopped looking for bodies, and their attention has turned to rehabilitation, draining the lake that threatens the valley downstream, and trying to re-open the Kodari Highway to Tibet. 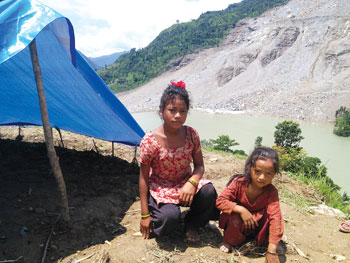 Two children live in a tent with surviving members of their family overlooking the landslide-blocked river. 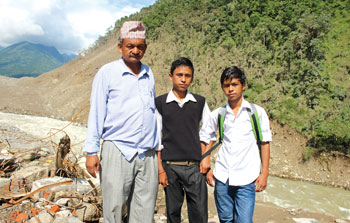 Balaram Timilsina principal of the Bansangu School stands amidst the ruins of his school with students Ayush and Iswor Nepal, who lost their classmates.

“It is painful, but we have to move on from this tragedy,” says Balaram Timilsina, 55, principal of Bansagu School, which had dedicated teachers and one of the best SLC results in the district.

Timilsina’s eyes tear up when he talks about the students who are never coming back.

“I remember their innocent faces, many had shared their dreams of a bright future,” says the school principal, breaking down into sobs. Two surviving students, Iswor and Ayush Nepal, comfort their teacher even though they are grieving the loss of their own classmates.

“I lost six of my best friends, and now I have to live with this for the rest of my life,” says 16-year old student Babita Parajuli, wiping tears. Her family home was destroyed, and only two houses in Kaguni remain intact.  The school has been trying to resume classes in temporary structures scattered across the area, but it hasn’t been easy because the children are so traumatised.

“Many of them had close shaves, and were witness to death and destruction, they lost relatives and friends, we are worried about them,” says Sanjana Shrestha of Save the Children, which is helping the District Education Office start temporary learning centres.

It is a four-hour walk from where the highway ends abruptly to the village of Dabi that clings precariously to the side of a steep mountainside above the Bhote Kosi. 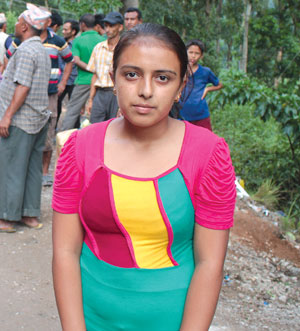 Kabita Parajuli lost six of her classmates, 28 of the 50 children killed in the disaster were from her school. 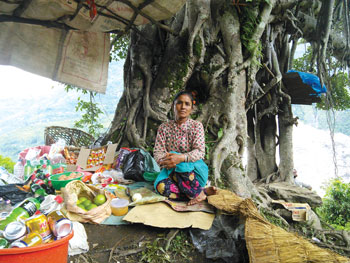 Sabita Gharti who lost 13 of her relatives now tries to earn a living selling provisions to travellers traversing the landslide on foot to get to the other side.

Local villagers and rescue teams from the APF and the Nepal Army wear masks which does little to keep away the smell of buried bodies.

Dabi has the best view of both the landslide and the lake, and curious onlookers, some of them Chinese tourists from across the border, have to be kept away as they try to take pictures with their mobiles. Ironically, the disaster tourism has helped the local economy as grocery stores have sprung up along the trail.

“We earn Rs 3,000  a day now, the visitors are good for business,” says 15 year-old Elina Shrestha forcing a smile. She had a narrow escape when a huge rock crashed through the main door of her house that morning. Elina’s family and nine others now live in tents. 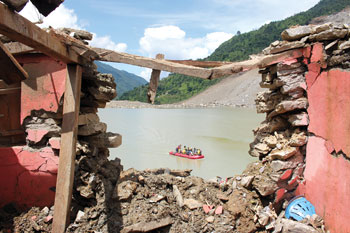 For communities downstream there is still fear that the rocks and boulders damming the Bhote Kosi (left) will suddenly burst, and unleash a flood.

The government has been trying to assure the public that the water level is going down, but contradictory reports in the media has spread confusion.

“We are keeping everyone informed, but it takes time to earn their confidence,” admits Lt Col Suresh Kumar Karki of the Nepal Army which helicoptered in three disassembled excavators this week to widen two channels draining the lake, and opening another one. The Army’s controlled blasts have limited effect because the blockage is made up of huge boulders and rocks.

The Army is trying to ensure that the outflow of water is greater than the inflow, but with heavy rains in the catchment area this week, it is a race against time. On 12 August, the outflow of water was 210 cubic metres per second, barely more than the inflow of 205 cumecs upstream. “There is less danger of the water level rising further or the dam bursting,” says Karki. The obstruction of landslide debris is 300 m wide and 100 m high. In similar disasters elsewhere, water is siphoned off through huge pipes, but Nepal does not have the technology.

The challenge for the government now is to relocate, rehabilitate and support the displaced and vulnerable population. Other urgent tasks include restoring the vital trade route to China, and repairing transmission lines that provided 55MW of power to the grid from three hydropower stations on the river. An alternative route via the Jiri Highway has been opened to Kodari, but the road is rough.

“This is a major disaster and while we are very committed, but we are overburdened by demands from the affected population,” says Sindhupalchok LDO, Yubaraj Katel.

Relocation of families will be a huge task, and one in which the national government will have to be  involved, he says.

Seventy-year-old Lankaman Tamang lost his home, and is living in a tent in the army camp with three other families from Itini. He says: “We can work and earn money to buy food, but we need to rebuild our homes to resume our normal lives.”

It takes more then just a hard strike to pot the ball. Snooker is a game of calculations, precision and control over cue stick and ball.
ALOK TUMBAHANGPHEY

Spirituality in the age of science

Our history is glorious. But, sadly, we cant live there. We have to live in the present, and plan for the future.
CK LAL
Wow! It namely likewise fine treatise about JavaScript, babyliss pro curler I dissimilar Your post doesn't acquaint any sense. ray ban outlet uk if information are defined surrounded sketches one can effortlessly be versed with these. hollister sale I think a visualized exhibit can be better subsequently simply a effortless text, chanel espadrilles for sale that why it gives you improved quality. getnjloan.com Can you amuse forward me the code for this script alternatively interest distinguish me surrounded detail among relation apt this script? Vivienne Westwood online get a babyliss perfect curl Very soon this network sheet longing be outstanding among all blog viewers, isabel marant sneakers saleI too prefer Flash,