“We do not exist”

Seven months since the earthquake, what little help survivors were getting to rebuild has been halted by the Indian blockade
Sahina Shrestha in SINDHUPALCHOK

On 25 April, when the earthquake devastated central Nepal, relief groups warned that shelters needed to be built before the impending monsoon. The rainy season has come and gone and winter set in, but government inaction and the Indian blockade means two million people are still homeless.

The Reconstruction Authority has been mired in Kathmandu’s politics, and the $4.1 billion promised by the international community soon after the quake cannot be disbursed. The UN and private relief groups involved in relief and reconstruction have cut back on deliveries because of the lack of fuel.

The last time we visited the village of Majhi Gaun overlooking the Indrawati River 50km northeast of Kathmandu in July residents were salvaging tin sheets and timber beams. All 30 homes had been destroyed, and the villagers survived the monsoon in leaky makeshift shelters.

“There is no way my father can rebuild our house even if he works all his life,” says Durga Majhi (pic, below), showing us her room with tin sheets for walls on three sides and a tarpaulin door. “If we had more money we’d all pitch in and take turns building each other’s homes.” 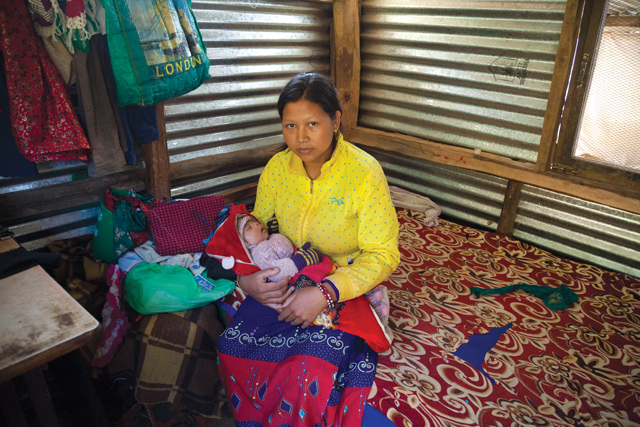 ALL PICS: ELLA A. ISRAELI

Very little help from the government or relief groups has reached Majhi Gaun and the villagers are left to fend for themselves. Come their way say the villagers here. Says Durga: “We see some relief trucks pass our village but no one stops here.”

Recently the villagers finally received the emergency Rs 15,000 from the government and many of them used this amount to buy furniture, kitchen utensils and strengthen their shelters. But many, including pregnant women and new mothers, are still sleeping on cold floors.

“We lost our house and all our belongings with it,” says Parvati Majhi, a mother of two. “It is not just a house we need to rebuild, it is our entire lives. The government has forgotten we exist.” 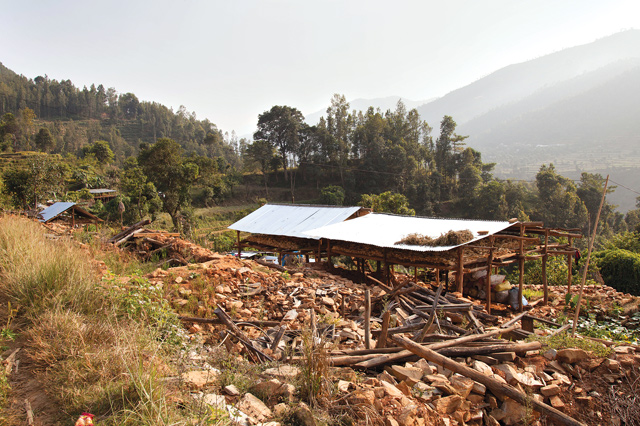 The villagers have little expectations from the government, but they had hoped that at least the NGOs and foreign aid organisations would come by. But even that is now jeopardised by the fuel crisis caused by the Indian blockade.

Says Manju Majhi: “We were not getting any help, and now this blockade has doubled prices of everything we need. What will we do?”

There are signs of undernourishment among the children, who don’t look like they are dressed for winter.

Twenty-three-year-old Amrita Majhi says she has aged a lot after the earthquake. She had just given birth to her son Om 17 days before the earthquake during which she was on her way to a health post.

For four days after the earthquake, they had very little to eat. When we met her five months ago, she was worried about her baby getting enough food. When we met her last week, nutrition for her child was still her main concern. 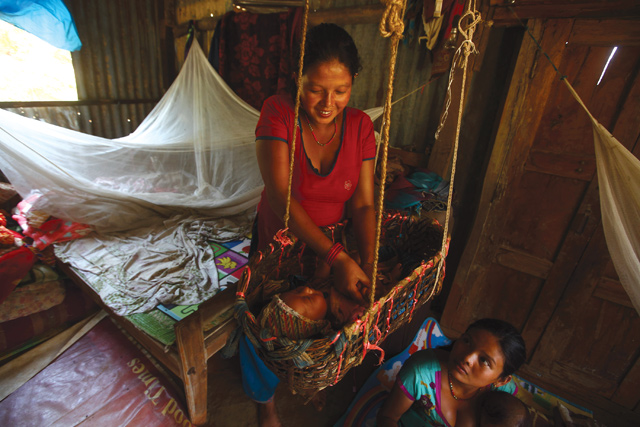 GOPEN RAI
THEN AND NOW: In July Amrita Majhi, 23, was worried about her baby getting enough food . Five months later, nutrition for her child is still her main concern (below). 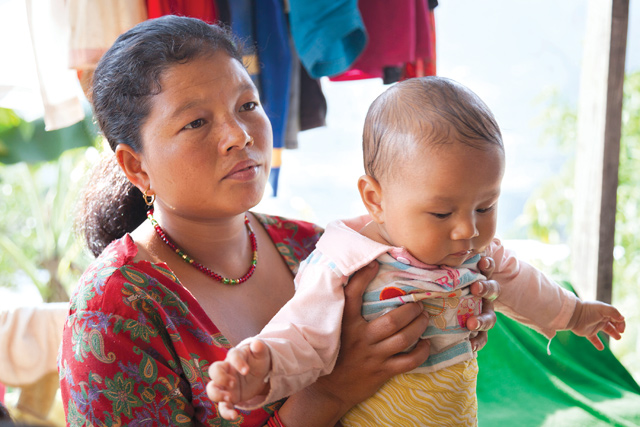 “The milk I produce is not enough for my son, I could have made supplementary food from our stored grain but it was all destroyed.”

Other new mothers in Majhi Gaun voice similar concerns. The children have been falling sick, pregnant women worry about proper diet and dread the winter.  No one can afford the exorbitant bus fare to the nearest health post in Dolalghat. 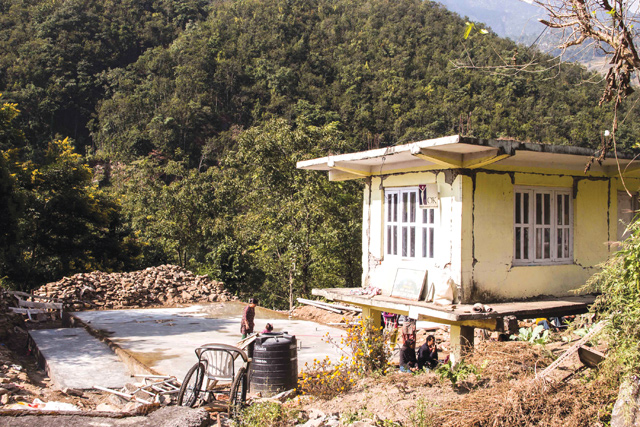 An hour’s drive along a rough dirt track north of Melamchi is the village of Tipeni which was devastated during the April earthquake. In the monsoon walking is the only way to get here, and this isolation has made it even more difficult for the government to provide earthquake relief to the village.

But private relief groups have been filling the gap left by the government, and the Kathmandu Hub of the international youth organisation Global Shapers has been helping 50,000 residents of 10 surrounding VDCs with their most pressing need: medical attention.

The local health post (pic, above), completely destroyed in the quake is now being rebuilt, and with the participation of locals, Global Shapers has set up a committee to operate it into future. Sindhupalchok district saw more than half the 8,900 fatalities in the earthquake.

“We wanted to focus on areas that hadn’t received assistance immediately after the earthquake,” says Sneh Rajbhandari, the Kathmandu Hub’s curator. “Tipeni had not yet had any medical team visit it and we were excited with the enthusiasm of the local people.” This was important for the health post to be run sustainably in future.

“I am very happy to have the health post because the nearest hospital is far away in Dhulikhel,” Hari Bhakta Dhital of the community board tells us.

The Indian blockade however, has significantly impeded relief efforts because of the difficulty in obtaining construction materials, the cost of everything going up, and the lack of diesel to transport them to where they are needed.

Still, the reconstruction effort has convinced nurse Shanta Dhakal to stay on in Tipeni despite its remoteness and lack of facilities. “Now that the health post has been rebuilt, I want to remain to help here. It has restored my faith,” she says.