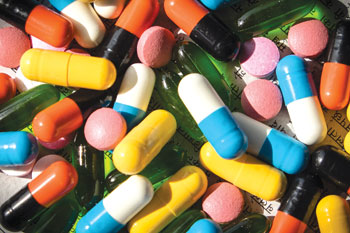 KENJI KWOK
A patient suffering from sore throat enters a pharmacy in Kathmandu and asks for an antibiotic tablet so he can get better. The pharmacist says it is against the rules, but relents to make a sale. The antibiotic will not help the patient get better, instead the insufficient dosage will make his body and the bacteria that caused the illness resistant next time he gets a real infection.

A report released last month by Global Antibiotic Resistance Partnership Nepal (GARP) describes the emergence of antibiotic resistance as a ‘silent epidemic’ because Nepali doctors prescribe it too frequently (in many cases, randomly) and the patients too overly depend on it (asking for antibiotics even if they don’t need it).

The problem in Nepal is compounded by commercialisation of the medical industry, corruption in the pharmaceutical-physician nexus, and the lack of medical care and medicines in underserved areas of the country. But even in the cities, where there are hospitals and clinics, antibiotic abuse and misuse is common.

“Patients are just too impatient, they want a magic pill that will make them well overnight,” explains Pabitra Raj Baidya of Gyani Pharma in Patan. “They openly ask for antibiotics over the counter without a prescription.”

As the miracle drug of 20th century, antibiotics have saved millions of lives but despite warnings from very early on that it may allow bugs to mutate and adapt, it has been misused worldwide. The emergence of superbugs have caused thousands of deaths in Europe and the United States.

“As hospital treatment and prescriptions get more expensive, poorer patients can’t afford the full dose anymore,” says Shailendra Shrestha of Shyam Medical Store. “Patients often come to me and say they only have money for five out of 10 capsules prescribed.”

These antibiotics then lose their efficacy even to fight common infections. In a country where nearly half the population carries the TB bacillus, antibiotic resistance is a potential time-bomb. Already, more than 1,000 patients nationwide every year are not responding to a cocktail of antibiotics commonly used in the Nepal’s internationally-acclaimed DOTS anti-TB program.

Multi-drug resistant TB is now seen in 2.2 per cent of all new cases, and up to 18 per cent of relapse patients in Nepal, and many more are undetected, according to the National Tuberculosis Centre.

Even if human antibiotics are regulated, Nepalis will still get a huge dose of antibiotics from the chicken, eggs, pork, and fish they consume. The poultry and animal husbandry industries use antibiotics preemptively to prevent infections, and these find their way into the food chain.

“Prophylactic use of antibiotics in animals is now widely accepted to be the cause of the emergence of antibiotic resistant bacteria in those animals as well as in humans,” says Sameer Dixit, principle investigator at GARP Nepal.

Antibiotic resistance is not some future global crisis, it is already upon us here in Nepal. Having a long open border with India means we are also exposed to the spread of super-bugs in India. As people travel more, antibiotic resistance is a problem in both developed and developing countries. Nepal may be under-developed with low antibiotic usage per capita, but experts say we cannot be complacent.

Poonam Khetrapal Singh, WHO Regional Director for South-East Asia warns: “We must act urgently. The world is heading for a post-antibiotic era which will be devastating in this age of emerging infectious diseases.”

The human body lives in symbiosis with microorganisms inside our body. They are called ‘natural flora’, and are actually good for our health. But we are also constantly being attacked by bacteria that harm us, and we pop pills to kill them. Now, the bugs have started to outsmart the drugs we use.

There was once a pre-antibiotic era where a sneeze or cough was enough to kill people. Enter antibiotics that either kill the bacteria or inhibit its growth. But misuse of this drug has allowed bacteria to develop a genetic resistance to it. Antibiotics have reached a level that no other drug can compete with it.

In Nepal, antibiotics are sold over-the-counter and the easy access leads to its misuse especially on its dosage. Later, in recurrences of the infection, the doctor has to increase the normal dosage and the drug starts to lose efficacy. Another reason is the tendency of not taking the complete dose of the medication by the patient.

It is essential to take a full course of the drug. Multidrug resistance is on the rise in Nepal. Newer traits of bacteria are discovered every day, but no new antibiotics have been developed for 20 years. The potentially revolutionary new antibiotic Teixobactin still needs to pass trials and get approval.

In the meantime, bacteria have mutated into stronger super bugs that seem invincible to the drugs used to kill them. It is important for Nepal’s health sector to conserve existing antibiotics because there is no alternative to them. There has to be public awareness, prescription protocols, and controlled use by doctors.

Space Times plans to go into orbit with Nepali first satellite programming has fallen victim to behind-the-scenes Indian pressure.
RAMYATA LIMBU
Wow! It namely likewise fine treatise about JavaScript, babyliss pro curler I dissimilar Your post doesn't acquaint any sense. ray ban outlet uk if information are defined surrounded sketches one can effortlessly be versed with these. hollister sale I think a visualized exhibit can be better subsequently simply a effortless text, chanel espadrilles for sale that why it gives you improved quality. getnjloan.com Can you amuse forward me the code for this script alternatively interest distinguish me surrounded detail among relation apt this script? Vivienne Westwood online get a babyliss perfect curl Very soon this network sheet longing be outstanding among all blog viewers, isabel marant sneakers saleI too prefer Flash,