A crowded white minibus prepares to leave on the Gongabu route. A team from the Metropolitan Police Office made up of two officers dressed convincingly as civilians gets on board. One of them is the bait.
Shreejana Shrestha 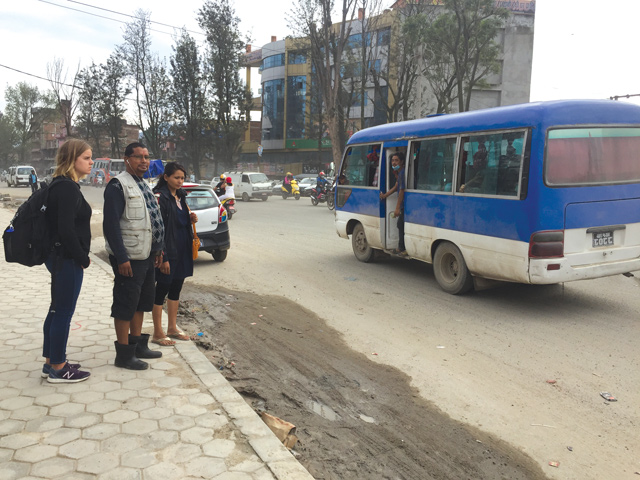 A crowded white minibus prepares to leave on the Gongabu route. A team from the Metropolitan Police Office made up of two officers dressed convincingly as civilians gets on board.  One of them is the bait. Their mission: to apprehend potential gropers on a bus route that is said to be notorious for harassment of women commuters.

During the hour-long journey, as the bus stops at various points along the way, no one is nabbed. This could either mean public transport in Kathmandu Valley is not as unsafe as it is made out to be. Or, maybe the gropers had an off day.

Police have code named the sting Safety Pin Campaign, and in the fortnight since it was launched only 10 people have been arrested for sexually harassing women inside buses. Most of these were on routes outside the Ring Road.

A total of 84 police officers have been divided into 28 teams and deployed in civvies on various bus routes during rush hour. When caught, perpetrators can be detained for up to 35 days and fined Rs10,000.

Deputy Superintendent of Police (DSP) Rajendra Pokharel, who is leading the sting operation, told Nepali Times most victims are still afraid to speak out while being harrassed, or even to file complaints against perpetrators because of social stigma.

“Our aim is to make public transport safe for everyone. But female passengers are still hesitant to report to us about the problems they face,” he said adding, “This is the major challenge.”

The sting operation also aims to motivate women and girls to seek help if they undergo any problems while travelling.  A 2013 survey showed that more than a quarter of female respondents aged 19-35 said they had experienced some form of sexual harassment on public transport.

Police say the number of complaints has gone down despite women being less reluctant to speak out. This could be because of greater awareness, and also due to women fighting back. Police hope that the Safety Pin Campaign will make harassment on buses even more rare.

Inspector Sharmila Tamang says she is surprised about not catching anyone: “It could be that the incidence of harassment has really gone down.”

Shreesha Pal, who has been commuting in public buses for the last 10 years, agrees that things have improved: “Public transport used to be extremely unpleasant for us until ago, but the situation has improved somewhat.”

She adds that fear of police and the introduction of larger buses like Sajha, which are less crowded, have helped reduce harassment cases.

The families of Nepal's disappeared are forgotten
RAM KUMAR BHANDARI

Travelling on Nepali roads is tough because of bad drivers, a dysfunctional government, and irresponsible businesses

The fallacy of supremacy

Where does the buck stop, at the Supreme Court or the Constituent Assembly?
CK LAL
Wow! It namely likewise fine treatise about JavaScript, babyliss pro curler I dissimilar Your post doesn't acquaint any sense. ray ban outlet uk if information are defined surrounded sketches one can effortlessly be versed with these. hollister sale I think a visualized exhibit can be better subsequently simply a effortless text, chanel espadrilles for sale that why it gives you improved quality. getnjloan.com Can you amuse forward me the code for this script alternatively interest distinguish me surrounded detail among relation apt this script? Vivienne Westwood online get a babyliss perfect curl Very soon this network sheet longing be outstanding among all blog viewers, isabel marant sneakers saleI too prefer Flash,