Nepalis are increasingly preserving their eggs, semen and embryos but not just for urgent medical reasons
Shreejana Shrestha 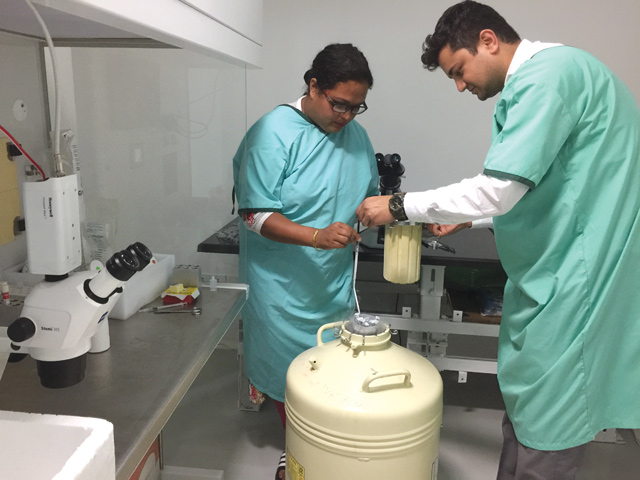 Married for a decade but infertile, Sushmita Bhandari now has hopes of motherhood. She is waiting to conceive her first child next month through a frozen embryo transfer, a new technique to perform in-vitro fertilisation (IVF) just introduced to Nepal.

Bhandari’s husband is a migrant worker in Malaysia and is unable to come to Nepal frequently for the IVF. When he was home two months ago the couple froze their embryos at Vatsalya IVF and Fertility Centre, one of the few clinics in Nepal that offers the procedure.

“Even if my pregnancy fails next month I can redo IVF, as four of our frozen embryos are stored in the lab,” says Bhandari, 28. “My husband can only come back next year, but this means I can still try to get pregnant.”

Bhandari married at 20. She has not been able to conceive naturally because of a fallopian tube obstruction but instead of going through the painful treatment to rectify it, she opted for this new technique, which is cost-effective and less invasive.

She has so far paid Rs190,000 to freeze the embryos for later transfer to her womb. But if the pregnancy fails, she can keep the remaining embryos in the lab for Rs30,000 per year.

Prashant Subedi of Vatsalya explains: “Frequent steroids and stimulation can deteriorate the ovary. If 20 eggs or sperm are retrieved in one session, up to two embryos can be transferred at a time.” He adds that the remaining eggs and sperm can be frozen in case of failed pregnancy for a later IVF. Studies have found that the success rate for frozen embryos is higher than for fresh embryos.

IVF expert Dr. Uma Shrivastava explains: “There is a hormonal influence in the uterus when eggs are retrieved through stimulation. So, embryos are transferred to the womb only after a month.” She adds: “The uterus gets time to heal, ultimately leading to high chances of pregnancy.” 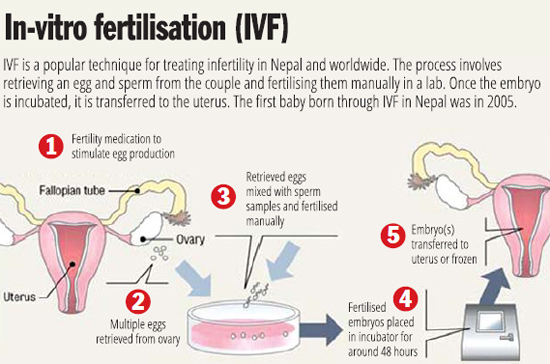 There is no official data on infertility in Nepal and many couples go to India for IVF services, but having sensed the demand surge, hospitals and clinics in Kathmandu are also setting up facilities for frozen embryo transfers even though the government hasn’t yet come up with guidelines. (see box).

Until a few years ago, only infertile couples were using IVF but now others who want to delay conception are taking advantage of the technique.

Binay Lama, 29, was diagnosed with rectal cancer seven months ago. He will have to go through extended chemo and radiotherapy in the next two months, which carries the risk of permanent infertility. As a precaution, Lama has frozen five vials of semen.

“After two years of marriage, I want to make sure we can have children: that is why I have frozen my sperm,” Lama told us.

Puja Bhandari, 27, is optimistic about her career. She works for an NGO and doesn’t plan to get married soon despite pressure from her family. She has frozen her eggs just in case she has a late marriage.

“I don’t want to compromise my career and get married right away. I want to have babies in my late thirties, using the 22 eggs that I have frozen now,” she says. A 2010 UK study found that an average woman will have just 12% of her eggs remaining by 30 and that the quality of those eggs will deteriorate as she gets older.

Prakash (name changed) has been smoking for the last nine years and is aware the habit can reduce fertility by affecting the motility and shape of his sperm. The 27-year-old has had seven vials of his sperm frozen because he is living an unhealthy lifestyle, which includes drinking alcohol and no exercise.

“I am trying hard to change my lifestyle, but just to be on the safe side in the future, I have frozen my sperm,” he explained.

Why freeze eggs and sperm?

(uterus lining grows outside of it)

Prime Minister Sher Bahadur Deuba was prime minister when he inaugurated Nepal’s first in-vitro fertilisation facility, Om IVF Centre, in 2004. At that time, there were no laws to regulate IVF services. Twelve years later Deuba is now prime minister for the fourth time, but Nepal still lacks laws governing embryo transfers. More than two dozen, private IVF clinics are operating in the Kathmandu Valley alone – none of them have legal standing. The Ministry of Health and Population (MoHP) hasn’t given permission to any hospitals or clinics to provide IVF services.

Bhola Ram Shrestha of the MoHP’s curative service division says it is more important that IVF service providers attain a baseline: “They need to meet the standards set by the ministry, but we are working on the regulation.” After surrogacy was banned in Nepal in 2015, the MoHP formed a committee to address the issue of infertility, but it was unsuccessful. Mahendra Shrestha, who led the committee, told us: “We had prepared a draft outlining the baseline for IVF service providers, but I have been transferred to another department and don’t know what happened to it.”

Shrestha blames insufficient human resources and frequent change of staff at the ministry for the failure to formulate laws on IVF: “We have asked the World Health Organization to help draft legislation and will come up with guidelines in six months hopefully.” 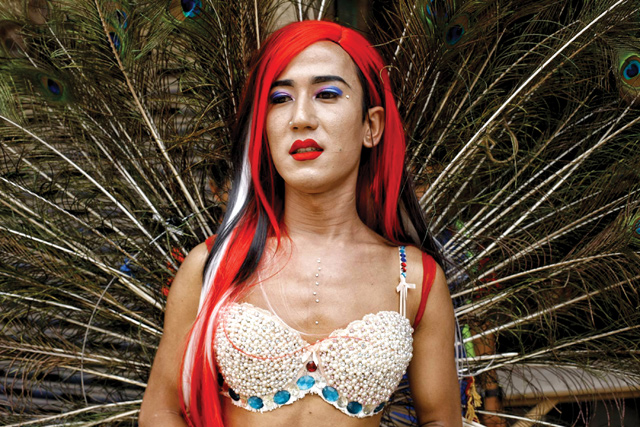 Nepali’s Constitution is hailed as one of the most progressive in South Asia for guaranteeing rights for sexual minorities, but the Supreme Court has curtailed sexual minorities from having surrogate pregnancies.

The lesbian, gay, bisexual, transgender and intersex (LGBTI) community (seen above at the Gaijatra Parade on Tuesday) is lobbying for same-sex marriage and the right to adopt children, but a 2016 verdict ruled that altruistic surrogacy is illegal for sexual minorities. Only infertile Nepali married couples will be able to practise it once the laws are formulated.

Pinky Gurung of Blue Diamond Society opposed the SC verdict and demanded that it be scrapped: “Surrogate pregnancy is the only option for transgender couples to have babies as they are biologically unfit to conceive: the SC doesn’t agree with constitutional guarantees.” Article 18 of the 2016 Constitution forbids discrimination against gender and sexual minorities. Even in 2007 the SC ruled to allow same-sex marriage, but the decision has not been ratified by Parliament.

Nepal emerged as a hub for commercial surrogacy after India in 2013 prevented gay men and couples who had been married for less than two years from opting for it. But the service was banned here in 2015 because of legal loopholes and provided an option of altruistic surrogacy for couples married for at least two years.

Embryos on the move, Shreejana Shrestha