Nepal learns from the Negev 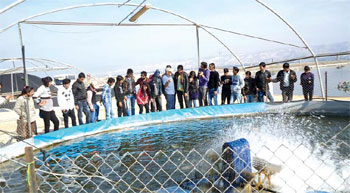 AMBIKA REGMI
PRACTICAL LESSONS: Nepali students of Kinneret visit a fish farming site near the Israel-Jordan border.
Ambika Regmi was working in her vegetable patch at home in Jhapa one day last year when she heard that she had been selected to go to Israel. But unlike other young women in her village, who had gone to Israel to work as caregivers for the elderly, Regmi had been chosen to take part in advanced agricultural training.

The 28-year-old had never been outside her village before she flew from Kathmandu to Tel Aviv last October. She is now a student at Kinneret College on the Sea of Galilee in northern Israel. “Since it was my first trip abroad I was worried when I left Nepal, but everyday has been a great learning experience here,” Regmi told us via Skype. “It is quite amazing to see how Israelis have such rich harvests in the desert. It has changed the way I look at farming.”

Two hundred members of Small Farmer Agriculture Cooperative from all over Nepal are taking the 11-month advanced course in agriculture in Negev, Kinneret, and Arava in Israel. The ‘learn and earn’ program allows the Nepali farmers a chance to study by doing how Israel has made the desert bloom.

They learn how drip irrigation can make use of every precious drop of water. They find out about pesticides, commercial farming, and quality control of produce. Ambika shares her dormitory with 11 other female Nepali students and they often discuss plans to start businesses when they return home later this year.

“We want to work on fish farming and move towards high value cash crops after returning home,” says Sangita Bhandari, also from Jhapa. 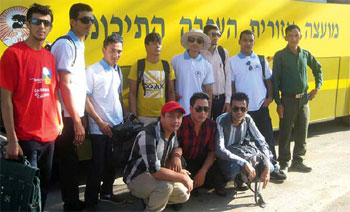 SHANKAR SILWAL
Students in Arava during a class field trip.
There is a lot Nepali farmers can learn in Israel, which is a major exporter of fresh produce despite most of the country being a desert. “Only three per cent of Israel’s workforce is involved in agriculture, but they produce enough to feed the whole country and also export the surplus,” says Israeli Ambassador to Nepal, Hanan Goder Goldberger, who came up with the idea to send Nepali farmers to Israel. “We want the Nepali students to take back lessons home about simple and effective practices like drip irrigation and market management and to expand beyond subsistence farming,” Goldberger told Nepali Times .

The Small Farmers Development Bank, which facilitated the training in Israel, wants Nepali farmers to come back with skills in high value cash crops like ginger, honey, herbs, and dry fruit. “Agricultural cooperatives have helped farmers all over Nepal expand their business, but that alone won’t help if we do not embrace modern farming techniques,” says Jalan Kumar Sharma, CEO of Small Farmers Development Bank, who hopes the first batch will return from Israel with innovative business ideas.

Upendra Adhikari used to work in a community radio in Dhading and is currently studying at Arava and working in a capsicum farm. He produces a syndicated radio program to disseminate what he has learnt to other farmers back home. Adhikari says: “If we can only bring home a fraction of what we are learning here and get help with capital investment, we could revolutionise farming in Nepal.”

The best course might be for Kangresis to amicably dissolve the party.
PUSKAR BHUSAL
Wow! It namely likewise fine treatise about JavaScript, babyliss pro curler I dissimilar Your post doesn't acquaint any sense. ray ban outlet uk if information are defined surrounded sketches one can effortlessly be versed with these. hollister sale I think a visualized exhibit can be better subsequently simply a effortless text, chanel espadrilles for sale that why it gives you improved quality. getnjloan.com Can you amuse forward me the code for this script alternatively interest distinguish me surrounded detail among relation apt this script? Vivienne Westwood online get a babyliss perfect curl Very soon this network sheet longing be outstanding among all blog viewers, isabel marant sneakers saleI too prefer Flash,