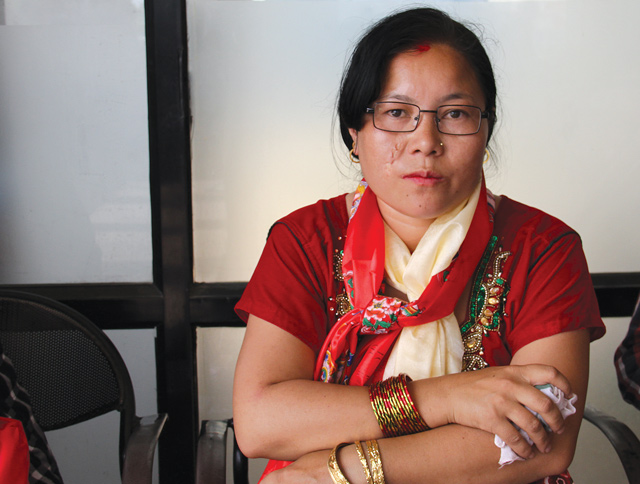 TAKING LEAVE: Dhanmaya Tamang at Kathmandu Airport before boarding a flight for Muscat last week. She had planned to quit her job and return to Nepal to be with her children, but with her house in Kavre destroyed by the earthquake, she is going back to Oman. Photo: Karma Dolma Gurung

She worked as a janitor in a hospital, and her husband was a waiter in a restaurant in Muscat. Their two children studied in a private English school in Kathmandu. From the savings of their two years of hard work the family had built a house in Kavre. When neighbours sent her pictures of their collapsed house, Tamang fainted with shock. She couldn’t sleep or eat for two days, and was admitted into the emergency ward of her hospital.

Finally, her employers were convinced about the seriousness of her loss and allowed her a month’s leave. To save unnecessary expenses, Tamang left her husband in Oman and travelled alone to Kathmandu.

“By the time I reached my house, everything was gone. I couldn’t even find a tea cup left. Whatever was left the villagers had already taken it,” she said.

It has been a month since she came to Nepal, and Tamang says she can’t stay in Nepal anymore. “I need to go back and earn more money to rebuild our house. My husband has no education, so I have to also work to support him,” she added, as she prepared to board her flight at Kathmandu Airport last week.

Migration experts say that there is a surge in outmigration for work after every major disaster like the Asian tsunami of 2004 or the Kashmir earthquake 2005, and the same seems to be happening in Nepal. However, even at the best of times female migrant workers are more vulnerable to exploitation and abuse.

“There is a global trend in the aftermath of disasters amongst women for unsafe overseas migration as well as internal displacement,” said Saru Joshi of UN Women in Kathmandu. Few women have official labour permits since female migration is still banned to some Gulf countries, and there isn’t reliable data about how many women are abroad.

The earthquake has increased the push factor because of the need to earn money for reconstruction, as well as the loss of jobs due to the decline in tourism. Many women who worked at dance bars in Thamel, for instance, don’t have jobs and are seeking illegal channels to work as domestics in the Gulf.

“We were training a lot of girls from dance bars and restaurants about safe migration but after the earthquake, I received messages from many of our trainees who have already reached the Gulf through illegal channels,” said Manju Gurung of Pourakhi, a group which helps female migrant workers.

Sheela Kulung’s story is emblematic of the vulnerability of Nepali women post-quake. A fake recruiter promised her and a friend a well-paying household job with a family in Uzbekistan. Both lost their jobs after the earthquake and had families to support, and had already paid the broker a hefty fee, but he absconded after giving them fake air tickets.

The government had banned domestic workers going to the Gulf due to increasing cases of abuse. A new set of recent guidelines has relaxed these rules to allow them to work in countries with Nepali embassies and reduced the age threshold from 30 to 25. However, there are doubts about whether the rules will be enforced.

“There will be a big problem with implementation of the policies because at the local level, the girls are not aware of the rules and recruiters will continue trying to smuggle them out via India,” said Paurakhi’s Gurung.
While Dhanmaya Tamang’s story has a silver lining, ruthless recruiters are cashing in on the desperation of women like Sheela Kulung.

Tamang waited in the queue at the departure gate last week clutching her ticket and passport in one hand. In the other hand, she held a bag with photographs of her children, 11 and 9 years old. She also had an Earthquake Victim ID card.

Janadharna, 6 July
Wow! It namely likewise fine treatise about JavaScript, babyliss pro curler I dissimilar Your post doesn't acquaint any sense. ray ban outlet uk if information are defined surrounded sketches one can effortlessly be versed with these. hollister sale I think a visualized exhibit can be better subsequently simply a effortless text, chanel espadrilles for sale that why it gives you improved quality. getnjloan.com Can you amuse forward me the code for this script alternatively interest distinguish me surrounded detail among relation apt this script? Vivienne Westwood online get a babyliss perfect curl Very soon this network sheet longing be outstanding among all blog viewers, isabel marant sneakers saleI too prefer Flash,