As far-fetched as it may seem, the Indian blockade has a silver lining
Sahina Shrestha 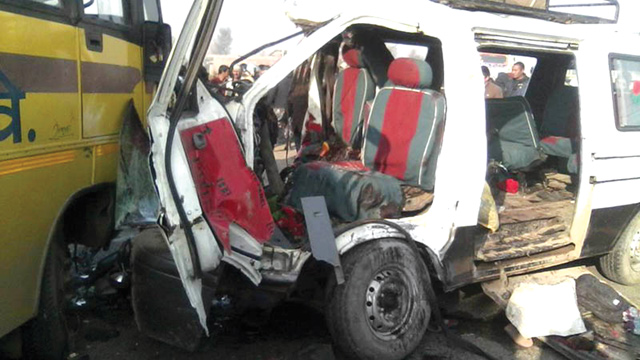 DEVIKA GHARTI MAGAR
COLLISION COURSE: Eight people were killed when this speeding van collided with a school bus in Dang on Wednesday, the latest fatal accident on Nepal’s deadly highways.

Recent news items about the Indian blockade of Nepal have reported on the fatalities caused by the shortage of medicines. However, the fuel shortage has actually saved many lives because there are fewer vehicles on the highways.

Latest statistics from the Traffic Directorate of the Nepal Police and the Metropolitan Traffic Police Department (MTPD) in Kathmandu show a dramatic drop in the number of highway fatalities and traffic accidents since August.

“One of the reasons the number of accidents decreased is because there were simply fewer vehicles on the road,” Posh Raj Pokharel of the MTPD confirmed to Nepali Times.

There is a similar drop in highway accidents nationwide as well. From 817 road traffic accidents in July-August, the total dropped to 617 in September-October. Despite the drop, however, police records show an increase in the number of people falling off vehicles and roofs of buses because of overcrowding.

The tragic death of 36 passengers in an overcrowded bus in Rasuwa highlighted the fact that people have been forced to get on the fewer numbers of public buses that are plying because of the fuel shortage.

Road accidents
Create your own infographics

At the peak of the fuel crisis from mid-September to mid-November only about 10 per cent of the urban and intra-city public transportation system was functional. Traffic police relaxed the rules on travelling on roofs of buses and more than two people on motorcycles because there was so much demand.

Police have also been unable to stop crowded buses from the Tarai carrying plastic jerry cans of black-market diesel and petrol and LPG cylinders on their roofs. Eight people were burnt to death when a bus caught fire in Banke on October after going off the highway and striking a tree. Most of the 33 passengers in the bus were carrying petrol. Passenger buses have been turned into petroleum tankers, and police admit that this is a disaster waiting to happen.

Now that petroleum supply has eased somewhat, and traffic is back to 75 per cent of normal levels, the number of accidents in Kathmandu Valley is rising again. MTPD has also started enforcing rules on more than two persons on motorcycles and rooftop travel. “Before the fuel crisis, we were seeing 15 accidents a day in Kathmandu, but this went down by half when the crisis was at its worst. Now the number of accidents is going up again,” says Pokharel.

He adds: “The only way we can really bring down the numbers is if everyone including pedestrians, passengers and bus drivers and operators follow traffic rules.”

Bringing the House down

Being a deeply despotic society, we find it hard to accept that someone not born to power can acquire it by being elected. This is why Kathmandus chattering class loves to hate commoner law-makers.
CK LAL

The travails of a population billionaire

Fertility rates have declined in the last six years, but Indias population program needs a review.
TV PADAMA IN NEW DELHI
Wow! It namely likewise fine treatise about JavaScript, babyliss pro curler I dissimilar Your post doesn't acquaint any sense. ray ban outlet uk if information are defined surrounded sketches one can effortlessly be versed with these. hollister sale I think a visualized exhibit can be better subsequently simply a effortless text, chanel espadrilles for sale that why it gives you improved quality. getnjloan.com Can you amuse forward me the code for this script alternatively interest distinguish me surrounded detail among relation apt this script? Vivienne Westwood online get a babyliss perfect curl Very soon this network sheet longing be outstanding among all blog viewers, isabel marant sneakers saleI too prefer Flash,