Cracks in the Madhesi front 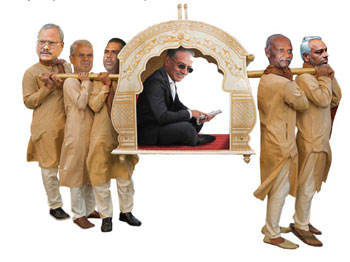 HIMAL KHABARPATRIKA
The ruling NC-UML coalition looking determined to bulldoze through a new constitution through a vote in the Constituent Assembly and the opposition UCPN (Maoist) and Madhesi Front alliance equally resolute in preventing it. But both sides have a new headache: deep distrust among themselves.

Constituents of the 30-party opposition alliance led by the Maoists are distrustful of each other and fear backstabbing, raising doubts over success of their agitation against the NC and the UML’s efforts to settle the disputed issues of the new constitution through a vote.

It all started after the MJF (Democratic) Chair Bijaya Gachhadar, the leader of the Madhesi Front, tried to bring the ruling and opposition parties to a negotiation hours before the 22 January deadline ended. At the outset, all major parties agreed but Pushpa Kamal Dahal of the Maoists quickly backtracked, clearly upsetting Gachhadar. On Wednesday he put forward another proposal for a three-province Madhes as a compromise over disputed districts in the eastern plains.

Later that night, when opposition lawmakers shouted slogans to stop the CA from forming a questionnaire committee, Gachhadar stayed aloof. He did not raise his fist, publicly displaying his dissatisfaction with the Maoist.

Since then, the distance and distrust between Gachhadar and other opposition parties have only grown, straining relations not just between the UCPN (Maoist) and the MJF (Democratic), but also creating rifts within the Madhesi Front.

In an interview, Baburam Bhattarai accused Gachhadar of acting at the behest of the NC and the UML. Talking to Nepali Times, MJF (Nepal) Chair Upendra Yadav, a key figure in the Madhesi Front, not only backed Bhattarai’s accusation but was blunt in berating Gachhadar.

“He (Gachhadar) is born to be a minister, he has no commitment to our cause,” said Yadav. “All that he wants is a ministerial berth.”

Yadav and Sadbhavana Party leader Rajendra Mahato, who nursed a joint grudge against the UML Chair KP Oli following a heated dispute between them last month, were keen to quit the CA and launch a ‘fierce agitation’. Again, Gachhadar didn’t agree.

“What do you mean by a fierce agitation? Picking up a gun? Waging a war?” Gachhadar reportedly told the meeting. “Solutions must be sought within the house, not on the streets.” Gachhadar was supported by another member of the Madhesi coalition, the TMLP’s Mahant Thakur, who has also been against the idea of walking out of the CA.

Chandeshwor Khatwe, secretary of the MJF (Democratic), says Gachhadar’s outburst was misreported by the media. “There is no dispute within the Madhesi Front about hitting the streets, but, unlike other Madhesi parties, we do not want to push the country into a new conflict.”

Khatwe added, “We want to carry out street protests only to create pressure on the NC and the UML to come to a consensus with us. And that is still possible within the CA.”

All is not well within the fringe parties either.  Some of them have started distancing themselves from the 30-party alliance. The Janata Dal is no longer with the alliance and claims that other smaller identity-based parties will also follow suit.

“Opposition parties have different interests,” said Hari Charan Sah, Chair of the Janata Dal. “For example, we just wanted proportional electoral system. Because the ruling parties have agreed to it, there is no need for us to be in the opposition alliance.”

The Maoist-Madhesi alliance was unnatural to begin with, and some members seem to be attracted by the Hindu royalist RPP (Nepal). Angered by the NC and the UML’s decision to not hold a vote on republicanism, federalism and secularism, RPP (N) has publicly expressed their willingness to forge an alliance with the opposition.

A Maoist leader told Nepali Times it wasn’t impossible: “We are open to everyone, be it Kamal Thapa or Mohan Baidya, but we have yet to discuss this issue.” If that happens, a Maoist-RPP(N) alliance would be even more unnatural.

In its recent Central Committee meeting, the Maoists concluded that the people are not ready for a return to revolution which is why it is relying on the Madhesi Front to begin a new movement in the Tarai. The trouble with that is the Madhesi Front itself is marred by mutual mistrust among members. It is incapable of serving the Maoist interest, at least for the time being.

Even while warning of strong street protests, the Maoists look equally desperate to hold face-saving talks with the NC and the UML. In a meeting of the 30-party alliance on 4 February, Dahal expressed his frustration at the lack of overtures.

Eight months after their uprising, the brave women of Dailekh are fending for themselves
ARUNA UPRETY

Nima Dorje Lama was lucky he survived, others never made it out alive
ALOK TUMBAHANGPHEY

A tortured past and torturous future

The UN is sending a special envoy to report on the rise in torture cases in Nepals conflict
NARESH NEWAR
Wow! It namely likewise fine treatise about JavaScript, babyliss pro curler I dissimilar Your post doesn't acquaint any sense. ray ban outlet uk if information are defined surrounded sketches one can effortlessly be versed with these. hollister sale I think a visualized exhibit can be better subsequently simply a effortless text, chanel espadrilles for sale that why it gives you improved quality. getnjloan.com Can you amuse forward me the code for this script alternatively interest distinguish me surrounded detail among relation apt this script? Vivienne Westwood online get a babyliss perfect curl Very soon this network sheet longing be outstanding among all blog viewers, isabel marant sneakers saleI too prefer Flash,