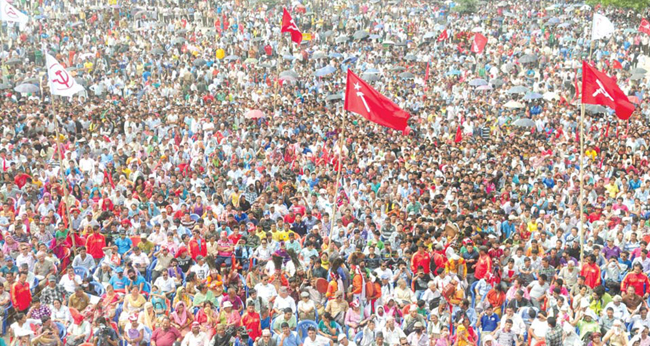 By the time of the launch of Nepali Times, the Maoist conflict had been going on for four years. The indiscriminate violence of the security operations had been backfiring, and serving only to bolster the ranks of the Maoists. Reportage of the conflict, still confined to the western hills, had long become a regular feature. The police had begun consolidating their strength by withdrawing from outlying posts but to no avail as the attacks continued without let. The over-running of Dunai in September 2000 proved to be a wake-up call. The ability to mount a direct attack on a district headquarters provided the Maoists with the kind of leverage that resulted in the first face-to-face meeting between the government and the Maoists a month later.

The present editor of Kantipur, Sudheer Sharma, was a reporter with Nepali Times’ sister publication, Himal Khabapatrika, at the time, and slowly beginning to make a name for himself as a knowledgeable analyst of the Maoist conflict. Sudheer had travelled to the conflict zone but his understanding of the Maoists extended beyond field assessments and it was in deference to that I recall asking him a simple question: Do you think the Maoists will not ultimately go the UML way? After all, when the UML came into the scene after 1990, they, too, were considered a revolutionary force.

That was something many of us were grappling with. The violence was sickening no doubt but the issues being raised by the Maoists were genuine enough. Even the-then American ambassador conceded to Nepali Times: ‘I think most sane people would agree with a large percentage of it [the Maoists’ original 40 demands].’

There was also the view that the Maoists were simply using the widespread disgruntlement to catapult themselves to the political centre-stage. Hence, my query. Come to think of it, it was quite an unfair question to ask of anyone but Sudheer who believed that the Maoists would be different if only because of all the bloodshed that had resulted (the number of the dead stood around a thousand then).

The death toll would rise 15-fold by the time the fighting ended in 2006, and the manner in which all the political forces that had united to defeat a resurgent monarchy began working together to create a New Nepal seemed to indicate that the Maoists had succeeded by far in their ostensible mission to create a more just and equitable Nepal. Granted, that they were not all too happy that a parliament that had yet to accommodate them took most of the progressive steps they believed, rightly so, was their agenda.

Thereafter, instead of capitalising on the goodwill they had at the time, the Maoists set about self-destructing. Whether it is the high-handedness of the party’s youth wing, their half-baked notions around identity politics, or the bourgeois decadence of the leaders, they soon lost a lot of credibility. And, so, in the years since 2006, all that we have left of the Maoists is their rhetoric, some of which they managed to insert into the preamble of the draft constitution and which, sadly, is the only achievement they can boast of. The rest of the document looks more like a reversal to the pre-2006 status quo, and the Maoists have been left owning that.

Nepal has changed greatly since the end of the conflict and while the progressive agenda may face setbacks, as seems to be the case with the draft constitution, movement can only be forward. The danger for the Maoists is of becoming irrelevant in the new political environment. The suspicion back in 2000 that the Maoists would become just another leftist force in the political landscape is being confirmed. But, unlike the UML, it does not even have an organisational base to bounce back from. The Maoists have probably outlived their purpose.

In the jungle raj

Despite its poverty and squalour, Bihar has the lowest suicide rate in India. It seems those who expect nothing are never disappointed.
CK LAL

The government ban on news on FM radio is seeing a backlash led by a parliamentary committee.
HEMLATA RAI
Wow! It namely likewise fine treatise about JavaScript, babyliss pro curler I dissimilar Your post doesn't acquaint any sense. ray ban outlet uk if information are defined surrounded sketches one can effortlessly be versed with these. hollister sale I think a visualized exhibit can be better subsequently simply a effortless text, chanel espadrilles for sale that why it gives you improved quality. getnjloan.com Can you amuse forward me the code for this script alternatively interest distinguish me surrounded detail among relation apt this script? Vivienne Westwood online get a babyliss perfect curl Very soon this network sheet longing be outstanding among all blog viewers, isabel marant sneakers saleI too prefer Flash,