Demolishing Kathmandu to rebuild it 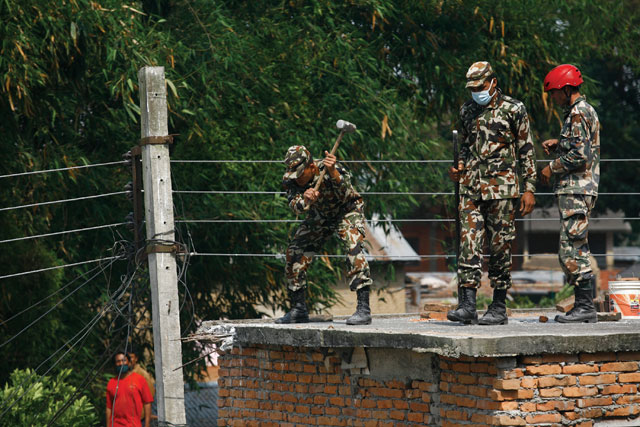 Prakash Khadka and his family have been camping under a tarpaulin for more than a month now even though their single-storey home was hardly damaged. However, a neighbour’s tall house has cracks and looks like it may come down onto his property in the next aftershock.

The damaged house is supported by wooden beams, but that is more for peace-of-mind than structural support. Now, a joint team of the Nepal Army and Armed Police Force along with a technical squad from the municipality are here to plan the demolition.

“I am scared the house will fall over mine when they demolish it, but even if it doesn't, it is sure to fall on top of us next time there is a major aftershock,” Khadka told us.

As an excavator poked and pulled the walls and roof of the first floor, the houses on both sides rattled and the electricity pole near the house threatened to collapse. A group of locals halted the demolition saying that the constant shaking would damage the houses nearby.

An estimated 50,000 houses in Kathmandu have been affected by the earthquake and its aftershocks, out of which 20,000 have collapsed or are on the verge of it. Many of them are in densely populated areas of Gongabu Buspark, Swayambhu, Balkhu and Kalanki.

“We are demolishing houses that threaten neighbours and also old structures that are damaged,” said Uttar Kumar Regmi of the Kathmandu Metropolitan City. He said old houses without pillars, new high buildings with shutters, buildings without proper design and those built with sub-standard materials were the ones to come down during the earthquake. 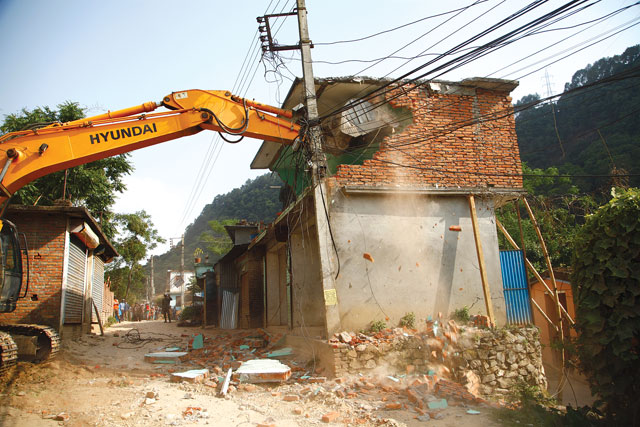 Surprisingly, the houses in Kathmandu that were rebuilt after being demolished during the road widening project were not affected by the earthquake.

But the government is ill-prepared to carry out large scale demolitions despite dozens of people coming in everyday with applications or complaints about unsafe houses in the neighbourhood. Officials freely admit they just don’t have the technical expertise to carry out controlled demolition on such a scale, especially of high-rise apartments. The municipality is concentrating on risky buildings of up to three stories.

“Right now we are using all the available materials but these aren’t enough to demolish higher structures,” said Shiva Hari Sharma, joint secretary of Ministry of Urban Development (MoUD). Earlier this month, the Ministry of Home Affairs formed a committee under Sharma to recommend a plan for demolition. “We have provided a list of equipment we need to demolish high-rise apartments and buildings that are more than three stories high to the Ministry of Physical Infrastructure and Transport,” he added.

The Nepal Army has so far demolished 103 concrete houses and many more mud and brick homes in the Valley. For other buildings that are not posing any risk to neighbours, the government is asking the home owners to take the lead and take down the buildings on their own. Sharma said the government needs help from foreign demolition experts with both the expertise and the equipment to demolish tall structures. “If they can come and work for a few weeks, and also train our men, it would be a lot easier and faster,” he added.

Debris management is another headache, and the KMC has designated the old cement quarry in Chobhar as a dumping site. Said Regmi: “While it is sad that so many buildings have gone down, this may also offer an opportunity for us to plan our city better.”

It's easy to lambast politicians, but the current crop are under extreme pressure right now
PRASHANT JHA

In India vs Kantipur in June, the truth was never  adequately explained to readers
CK LAL

We need to find a way to change the system, not the players
ASHUTOSH TIWARI
Wow! It namely likewise fine treatise about JavaScript, babyliss pro curler I dissimilar Your post doesn't acquaint any sense. ray ban outlet uk if information are defined surrounded sketches one can effortlessly be versed with these. hollister sale I think a visualized exhibit can be better subsequently simply a effortless text, chanel espadrilles for sale that why it gives you improved quality. getnjloan.com Can you amuse forward me the code for this script alternatively interest distinguish me surrounded detail among relation apt this script? Vivienne Westwood online get a babyliss perfect curl Very soon this network sheet longing be outstanding among all blog viewers, isabel marant sneakers saleI too prefer Flash,