Rasuwa was projected as an alternative trade route to China, but is plagued by delays and corruption
Dambar K Shrestha in RASUWA 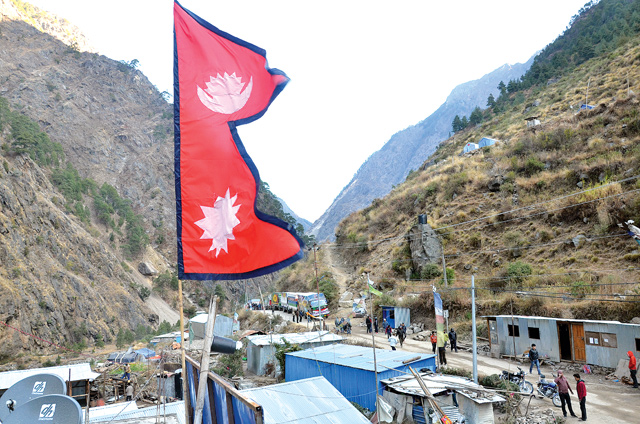 First, the earthquake cut off the highway to China through Kodari in April, then the blockade has obstructed Nepal’s trade links with India since September. Landlocked Nepal is virtually cut off.

The government boasted it would open the historic Rasuwa border with Tibet, and traders and tourism operators had pinned their hopes on this route speedily coming into operation. The 1,000 tons of fuel gifted by China did pass through this narrow road with much fanfare in October, but since then traffic has slowed.

The Nepal Army is to build a highway along the Bhote Kosi gorge, but that will take at least two years to complete. And Nepal needs to build customs, immigration and cargo facilities before this highway can serve as an alternative trade lifeline.

Across the river in China, there is an imposing 7-storey building and paved roads, while on the Nepal side there are tin huts and  dusty, bumpy roads (pics, above). Nepali traders haven’t even been granted one day passes to travel to Kerung to buy goods.

Last month, a team led by the Chairman of Nepal-China Business Association Kumar Karki pleaded with officials on both sides to go to Kerung to urgently facilitate trade. Many Nepali businessmen who had rerouted their goods to Rasuwa after Kodari was closed are disheartened by the delay.

“We are facing difficulties because we believed in what the media told us,” says businessman Shyam Rugata who was in Rasuwa to study the situation in the border. Chinese transporter Zang Tsi Ping says that even if the goods arrive at Kerung, it is difficult to get it across to Rasuwa. 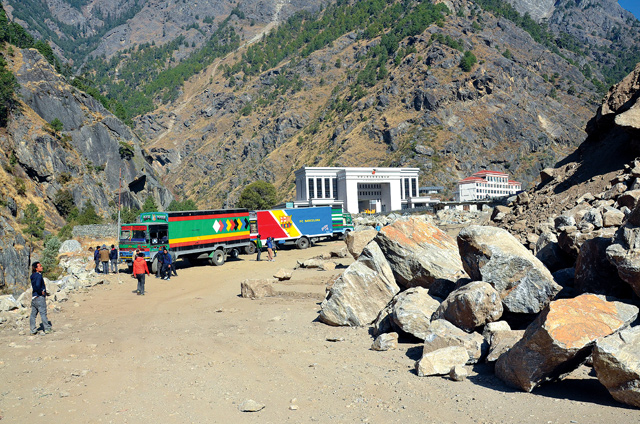 When truck driver Kapil Suwal reached the Rasuwa checkpoint to deliver a consignment to Kerung last month he was denied entry by the Chinese. So, he handed the truck over to a local driver and waited 20 days for it to return. Only 35 drivers who are from Rasuwa are allowed to cross over into China and they are fully booked, earning Rs 20,000 per trip.

Despite the obstacles, an average 25 cargo trucks do enter Nepal from China at Rasuwa every day. Another 400 trucks bringing goods from Guangzhou have been stranded in Kerung and there is always a long queue of container trucks on the Nepal side.

Once the trucks enter Nepal, customs processing is even more cumbersome. Each truck passes through 15 security check points of Nepal Army, Armed Police Force and Nepal Police before they reach Kathmandu, and transporters say they have to pay off officials. “It takes us ten hours to make the journey of five hours to Trisuli,” one driver complained.

There are also hassles with immigration and security checks. Truck cartels and local extortionists charge up to Rs 5,000 per vehicle to let them through. Chinese tourists and business also say they have to pay off Nepali police.

The government says it is moving ahead to build a dry port in Timure, and construction of a five-storey administrative building, a warehouse, security posts and parking for 350 trucks will start in three months.