Map showing total number of deaths in affected districts in the aftermath of the April 25 earthquake. Most recent data from Nepal Disaster Risk Reduction Portal. Map by Ayesha Shakya

In the aftermath of Saturday’s powerful earthquake which rattled central Nepal, a global volunteer initiative is working together to map physical infrastructure in affected areas to coordinate rescue and relief operations.

Kathmandu Living Labs (KLL), in coordination with the Humanitarian OpenStreetMap Team (HOTOSM), Mapbox Bangalore, Nepal Monitor and Parewa Labs, have brought together over 2,500 mappers globally to contribute to the OpenStreetMap platform to aid relief agencies and volunteers to plan and target their relief efforts. 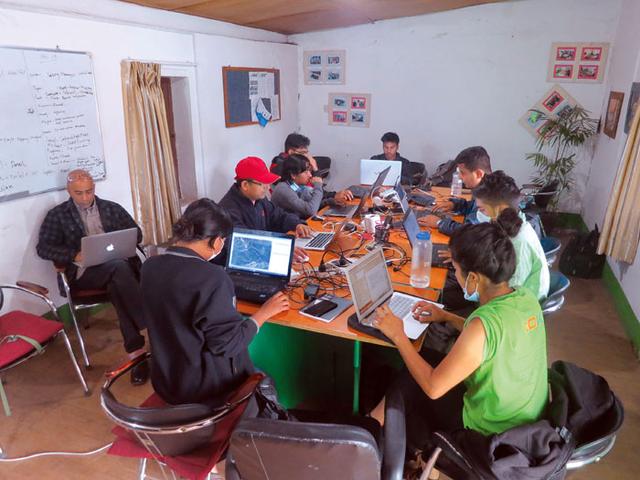 “Kathmandu Living Labs is creating a central repository for geo-located needs data, which is being used for relief efforts,” says Prabhas Pokharel of KLL.

The mapping was activated for Nepal the same day as the earthquake and was fully operational from Sunday, 26 April. “As soon as the 5am aftershock on Sunday, our KLL team was in touch with each other. Thanks to solar inverter and ADSL, we immediately began strategising what we could do best to impact and coordinate the situation,” adds Pokharel.

Users are allowed to submit reports to the crowd-sourced platform based on the following categories: damage caused by the earthquake, people trapped, blocked roads, help wanted, shelter area and distribution area.

Tags can be added onto the map, allowing users to identify areas that need help and to decide what kind of aid is needed. Larger the size of the tags, the greater the number of reports submitted by users.

“Within two days of launching the platform, we have had a lot of reports coming into the site. But the challenge is to effectively connect that information to the people involved in the rescue and relief work,” says KLL’s Nama Budhathoki.

The platform serves as a comprehensive database of pertinent issues related to the earthquake, and is supported with location details, contact information, additional photographs as well as videos. Users are able to identify issues that need to be acted upon and those that have already been resolved.

KLL have also been working on distributing maps extracted from OpenStreetMap data to aid in earthquake mapping. Most of these maps are focused on the 11 most affected districts, including Sindhupalchok, Gorkha and Ramechhap.

“These maps actually make efforts of the massive online volunteering useful to teams on the ground by providing them access to offline maps on smartphones as well as paper maps,” Pokharel adds.

The mappers are vectorising satellite imagery before and after the earthquake to identify roads, tracks and buildings in areas affected by the earthquake. They have mapped 13,199 new miles of roads and 110,681 new buildings. Much of the mapping is coordinated online and is updated every 30 minutes.

KLL works with agencies such as National Society for Earthquake Technology (NSET), the Nepal Red Cross and youth-based political party Bibeksheel Nepali as well as directly coordinating with civilians to collate the date.

While post-disaster satellite imagery are available for certain parts of Kathmandu Valley, it has been challenging to receive imagery of more remote locations.

Similarly, Google’s crisis team is crowdsourcing information to work on getting high definition satellite scans of heavily damaged areas, with priority over inaccessible regions. However, the work is still ongoing as it is looking for assistance to obtain names of villages or co-ordinates on Google Maps.

ICIMOD is also working with the Government of Nepal by providing its expertise in GIS and remote sensing to support the relief efforts. The Kathmandu-based mountain research institute is working with other stakeholders and space agencies to monitor other hazards triggered by the earthquake such as landslides and bursting of glacial lakes.

To use the platform, visit

For maps of 11 most affected districts, visit http://kathmandulivinglabs.github.io/quake-maps/

UML general secretary Madhab Kumar Nepal in Deshantar, 27 November
Wow! It namely likewise fine treatise about JavaScript, babyliss pro curler I dissimilar Your post doesn't acquaint any sense. ray ban outlet uk if information are defined surrounded sketches one can effortlessly be versed with these. hollister sale I think a visualized exhibit can be better subsequently simply a effortless text, chanel espadrilles for sale that why it gives you improved quality. getnjloan.com Can you amuse forward me the code for this script alternatively interest distinguish me surrounded detail among relation apt this script? Vivienne Westwood online get a babyliss perfect curl Very soon this network sheet longing be outstanding among all blog viewers, isabel marant sneakers saleI too prefer Flash,