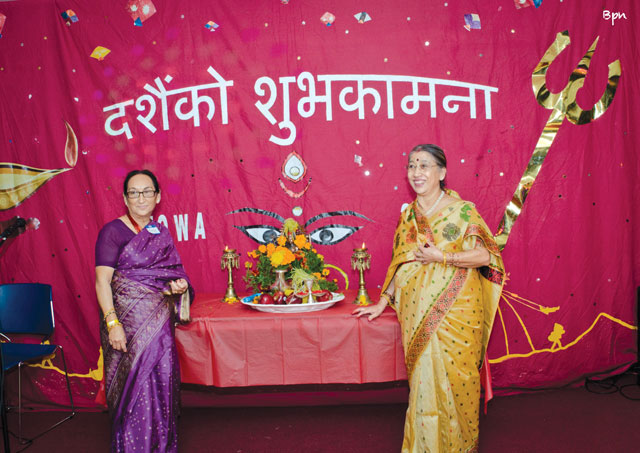 Dasain, the festival that unites Nepalis all over the world, is upon us. With about 3.5 million Nepalis living outside Nepal, it is also the season when families who cannot physically get together make a special effort to be in touch through social media. There are an estimated 60,000 Nepalis in the United States alone, and because it is not a holiday here most Nepalis have to juggle festivities with their busy schedules.

Says Kusum Pradhan of Iowa City (pictured at left, right) : “I try my best to follow our culture, but the difference with celebrating in Nepal is to get time off from school and work." Whatever precious time is set aside for Dasain is used to the fullest by Nepalis abroad. Most have to wait for the weekend to dress up, grow jamara, put tika and re-enact what they would do back home.

In Cincinnati, IT professional Suraj Adhikari says Nepalis use a weekend close to Dasain to gather. Another organisation in Iowa uses the occasion to hold its annual blood drive in Des Moines.

Born in Kathmandu but raised in America, Alpesh Chapagai is a high school senior in the suburbs of Chicago. Feeling a disconnect from his heritage, he uses Dasain to reconnect with his Nepali-American identity.

“The experience of Dasain events has left an indelible mark on my consciousness about my Nepali cultural identity,” Chapagai told Nepali Times.

Fond Dasain memories of flying kites and playing cards have inspired Chapagai to share his Nepali heritage with his peers. “In future I will invite non-Nepali friends to these events so they also learn about Nepali-American culture,” he adds.

Not everyone is making that effort. Whether they are recent diversity visa arrivals, students or undocumented workers, life is just too hectic and Nepal too far away to make the connection.

Despite the distance, Dasain holds a special meaning in the hearts of Nepalis across the world. Here in the US, some are making an extra effort to revive the joys of being with family and friends.

Chapagai sums it up: “Dasain is important because it is an annual reminder for me and other Nepalis that we are still connected to the traditions of our forebears back in Nepal.”

The pile of shoes by the front door kept growing outside the house of Jennie Sheldon’s ‘Ama’ during Dasain, as relatives came to Kathmandu in great numbers to celebrate the 15-day festival. She had arrived just weeks before, in the fall of 1983, a young American commuting on bicycle to work as an intern at an erosion-control project. She recalls most the generosity of her hosts, who invited her to pass the holiday with them.

“It was a big family event,” Sheldon recalls. “So I felt so lucky to be there with them.”

Dasain offers Nepalis abundant time to spend with family members and in some cases, return to their hometowns. Expatriates in Nepal, however, spend the festival in a range of destinations: from domestic to international locations and from trekking to chilling out at home. The lucky ones get to celebrate Dasain with Nepali friends.

Sheldon remembers well the annual traditions, such as the appearance of temporary swings made of bamboo above ridge lines, the kite-flying, and the giving of the tika on the 10th day of the festival. But she most vividly recalls, “overwhelmingly, their generosity of including us”.

Dasain at its core revolves around quality time spent with family, making it more private than a festival like Tihar that involves lighting ceremonies across Kathmandu and a specific type of puja for each day of celebration.

Steve LeClerq, country director for the John Hopkins Bloomberg school of public health who first came to Nepal as a Peace Corps volunteer 43 years ago, says that though he has periodically celebrated Dasain with Nepali families, it is not as easy or commonly participated in by foreigners as other festivals.

In one memorable account of Dasain, Steve was invited to Bandipur to celebrate alongside his language program teacher from the Peace Corps, where he received tika from the family's father and took part in some of the localised traditions of Dashain. This included a tug of war between villagers from eastern and western Bandipur, with a live sheep as the object in the middle.

LeClerq said that he has noticed a general decrease in the number of animal sacrifices during Dasain, with many families using other objects such as eggs or coconuts in their place. His own daughter, at age three, became a vegetarian because the festival had made her question and fully realise the connection between animals and meat.

"It's very nice to be around during Dasain time, and I really enjoy seeing people especially out in village Nepal, see people with their whole forehead covered in tika," LeClerq said. "It's really a festive time, and you know that everybody is feeling blessed."

Often times, as this year, LeClerq and his family take advantage of the time off to leave the country and spend time in the US. Over the years, they have gotten to know Nepalis when trying out a Nepali restaurant -- Everest Cafe -- in St Louis. From there, they attended a performance of the Nepali comedy duo Maha Jatra, during which they were asked to come on stage and speak about their experiences living and working in Nepal. They also went to a Gurum Bazaar selling various types of Nepali and South Asian goods, hit it off with the family operating it, and enjoyed a Dasain meal together.

Marty Logan, a Canadian who married into a Nepali family in 2003, has become the designated driver when the family goes to visit relatives around the Kathmandu Valley during Dasain. After 14 years, he says he has learned to pace himself during the week of “greeting and eating”. This year, however, he plans to leave the driving to someone else: the family is going to Delhi for the holiday.

Josh Ryan, an Australian freelance journalist, is about to spend his third Dasain in Nepal. Last year, he celebrated the entire holiday with his Nepali fiancée’s family. This year, he is getting married and celebrating afterwards with a family gathering in Pokhara. He will spend the remaining days of Dasain in Kathmandu, where his Nepali family’s relatives and friends typically come to visit his wife’s grandfather.

“Getting involved with a family is the best way to experience Dasain, and of course being part of one is even better,” Ryan told Nepali Times. “It’s very much a family time. There are so many practices that have been followed for years and years and years.”

We are what we eat, Aruna Uprety

It's the bank's business

Banks should have the freedom to decide how much to pay their employees, but they would do well to consider the society they live in
ASHUTOSH TIWARI
Wow! It namely likewise fine treatise about JavaScript, babyliss pro curler I dissimilar Your post doesn't acquaint any sense. ray ban outlet uk if information are defined surrounded sketches one can effortlessly be versed with these. hollister sale I think a visualized exhibit can be better subsequently simply a effortless text, chanel espadrilles for sale that why it gives you improved quality. getnjloan.com Can you amuse forward me the code for this script alternatively interest distinguish me surrounded detail among relation apt this script? Vivienne Westwood online get a babyliss perfect curl Very soon this network sheet longing be outstanding among all blog viewers, isabel marant sneakers saleI too prefer Flash,