If 2016 began amidst a border blockade, 2017 has started with a blockade of parliament 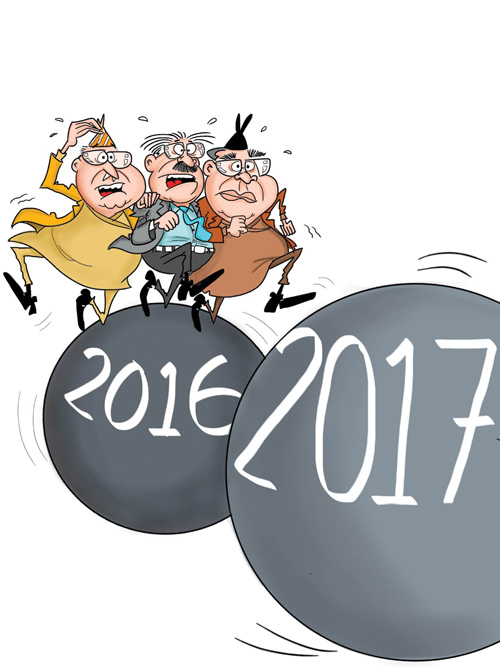 If 2016 began amidst a border blockade, 2017 has started with a blockade of parliament. One month after the bill was tabled for the controversial second amendment to the Constitution, the House remains blocked and elections are still uncertain.

After the Supreme Court refused to issue an interim order against the amendment bill this week, the NC-Maoist ruling coalition is preparing to debate it in Parliament early next week. Its hope is that the opposition UML will come around. The Madhesi Front has decided to vote for the bill with a note of dissent, and the Federal Alliance may also support it.

Mahendra Raya Yadav of Tarai Madhes Sadbhavana Party, a key  constituent of the Front, told Nepali Times: “The bill will not address all our demands, but we will support it.” The Alliance, led by Upendra Yadav’s Federal Socialist Party, says it will vote for the bill if it also amends Article 274 which prohibits tinkering with federal boundaries without the consent of future provincial councils.

After the SC verdict, the UML may allow the House to convene, but is angry with the government’s preparation Thursday to sack the National Reconstruction Authority (NRA) CEO Sushil Gyewali, a UML appointee.

However, even if the Front and the Alliance support the bill the ruling coalition will still fail to secure a two-third majority without the UML on board. NC President Sher Bahadur Deuba has assured Prime Minister

Pushpa Kamal Dahal that it is his responsibility to ensure the required number. Deuba is supposedly offering ministerial berths to the newly-unified Hindu Royalist RPP and the MJF (Democratic) to take the number to the magic 394.

Obstruction of Parliament has delayed the debate over the  impeachment of suspended CIAA Chief Lokman Singh Karki.  Meanwhile, the Supreme Court has resumed hearings on a writ petition that challenged the legality of Karki’s appointment.

The hearing was postponed after petitioner Om Aryal and other lawyers argued last month that Karki lacked the experience and moral character to head the anti-corruption watchdog.

As the hearing resumed on Thursday, lawyers for the defence Sushil Pant and Baburam Kunwar argued that Karki’s service in the royal administration had to be counted, and dismissed accusations of his moral character. Karki’s lawyers sought more time, and the Court will resume its hearing on Friday.

With the impeachment motion in limbo in Parliament, all eyes are on the Supreme Court verdict.

Who will bell the cat?, Binita Dahal

Along the nations lifeline, lawlessness is the norm
KIRAN NEPAL on the EAST-WEST HIGHWAY
Wow! It namely likewise fine treatise about JavaScript, babyliss pro curler I dissimilar Your post doesn't acquaint any sense. ray ban outlet uk if information are defined surrounded sketches one can effortlessly be versed with these. hollister sale I think a visualized exhibit can be better subsequently simply a effortless text, chanel espadrilles for sale that why it gives you improved quality. getnjloan.com Can you amuse forward me the code for this script alternatively interest distinguish me surrounded detail among relation apt this script? Vivienne Westwood online get a babyliss perfect curl Very soon this network sheet longing be outstanding among all blog viewers, isabel marant sneakers saleI too prefer Flash,