Seven new and old wonders of Nepal that are waiting to be re-discovered.

Running out of ideas for treks this spring? Is there a motorable road now along the trail that you always wanted to hike on? Fear not, Nepal still has plenty of places on offer. On the occasion of the 700th issue of Nepali Times we bring you a list of seven new and old wonders of Nepal that are waiting to be re-discovered. 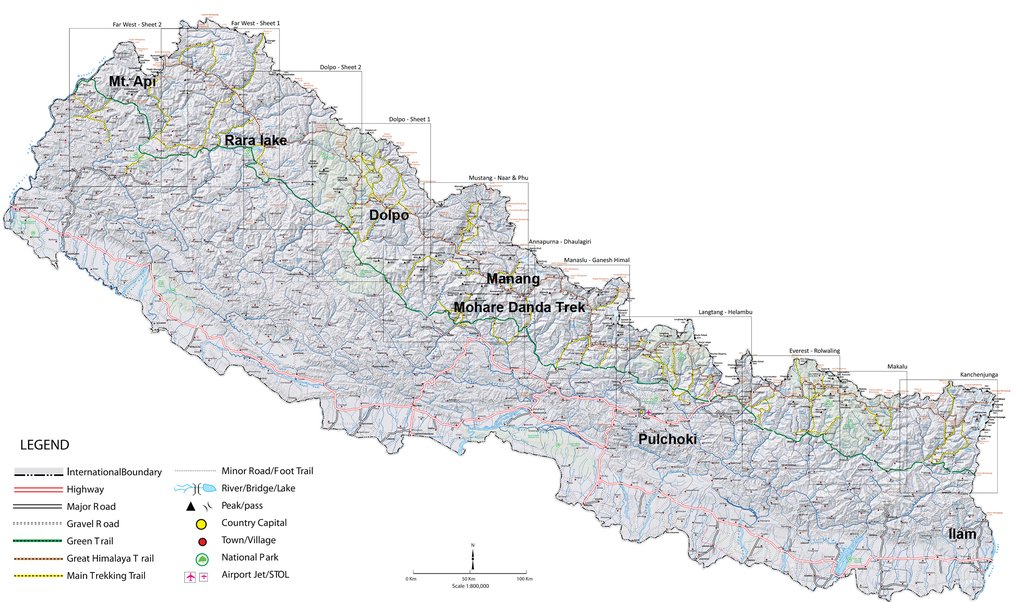 If you assumed base camp trekking meant altitude sickness and sleeping on a moraine, think again. Once at the foot of Mt Api which at 7,132m is the westernmost mountain in the Nepal Himalaya, you will camp at the edge of a coniferous forest and wake up to see the sun rise to the sound of chirping birds and a gurgling brook. Distinctly off the beaten path, Api lies in the remotest and hardest-to-get-to parts of Nepal. On the trail to Api Base Camp, you will not meet hordes of Shangri-La hunters or piles of trash, but will instead see what Nepal used to be like before opening up to the outside world and trekking started to happen. And if you are a mountaineer and feel like climbing Mt Api, do it while the waiver on climbing fees to this remote peak still lasts. 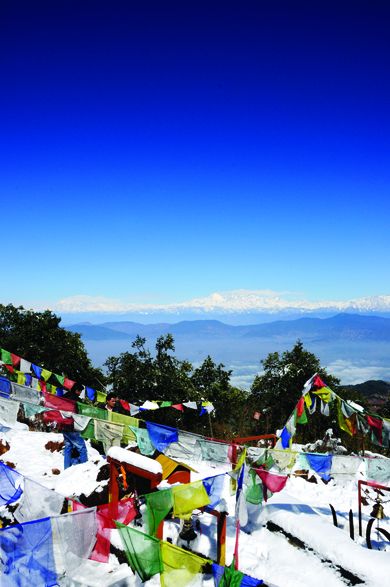 There is a mistaken belief that trekking in Nepal is all about self-inflicted hardships in the remotest parts of the country. Not so. There are plenty of enjoyable hikes around Kathmandu Valley itself, like Shivapuri National Park and day hikes up to Nagarjun or Chandragiri. But if you want to avoid other tourists and rowdy picnickers, head for the southeastern rim of Kathmandu Valley. Take a jeep up to Lakuri and start walking south along the ridge. The heavily wooded summit of Pulchoki (2782 m*) looms above you, and the sight of new highrises of Patan and Kathmandu can be seen below through the smog. To the east, the hills stretch out in shades of blue right up to the horizon. And Central Himalayan peaks from Dhaulagiri right up to Everest are arrayed to the north. 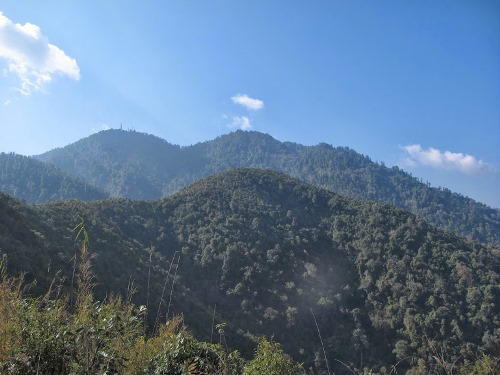 Pulchoki is a biodiversity treasure trove with more than a third of the 870 bird species, 200 types of butterflies and many plants that are endemic to Nepal. This trek is completely wild until you get down to the picturesque and prosperous villages of Rayale or Kusadevi of Kavre district where homestays are available. Our advice would be to do the six hour hike, and not be in a hurry to head back to the city. Stay up there in a Nepali village and imbibe the sights, sounds, smells and tastes of the real Nepal. 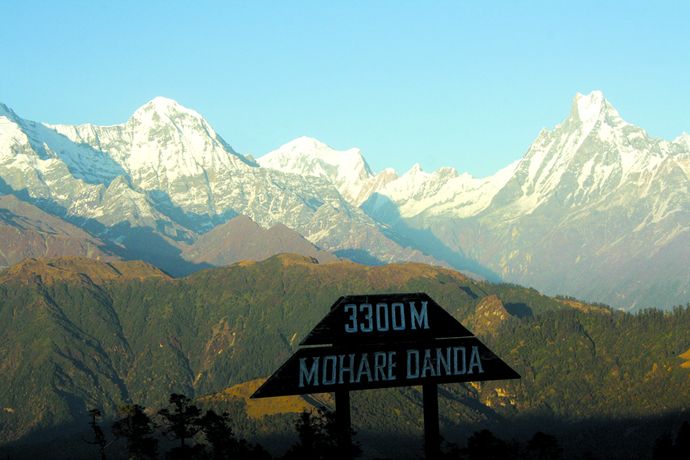 After the old Pokhara-Jomsom-Muktinath trail was connected to the highway network, many predicted trekking along the world’s deepest gorge between Dhaulagiri and Annapurna would be obsolete. Actually, it has opened up new areas made side valleys more accessible and brought the benefits of home stay tourism to the dwellers of remote villages.

Mohare Danda is the ‘high road’ alternative to the Ghorepani Trek, and follows an alternative trail up from Pokhara itself up to Banskharka, along to Nangi and Mohare. The treks are along scented forests of oak, rhododendron and spruce and sometimes along exposed ridges that offer exhilarating views of Dhaulagiri, Annapurna South dead ahead and the forked summit of Machapuchre to the east. You have a long circuit lasting a week to Dhankharka, or you can do a shorter five-day version fast-tracking through Tikot.

Mohare Danda Trek is an initiative of Magsaysay winner Mahabir Pun who has developed a unique concept of eco-trekking that benefits the environment and development of the area. 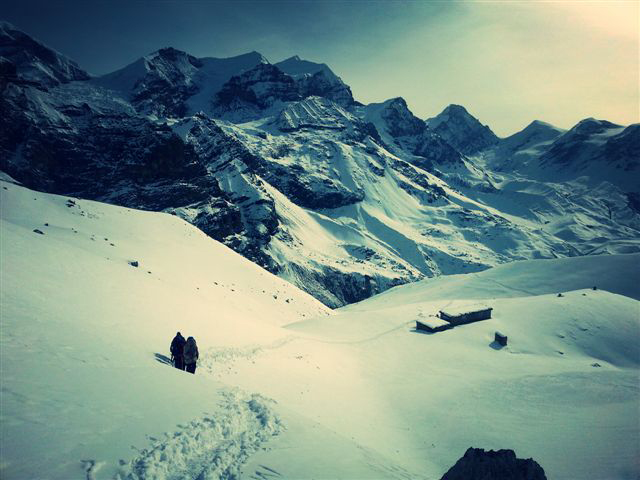 Most guide books will tell you the Annapurna Circuit Trek requires no technical climbing skill. This is reassuring. Because, that’s exactly what the three of us had: no technical skills especially to do the trek in the winter ‘off season’. 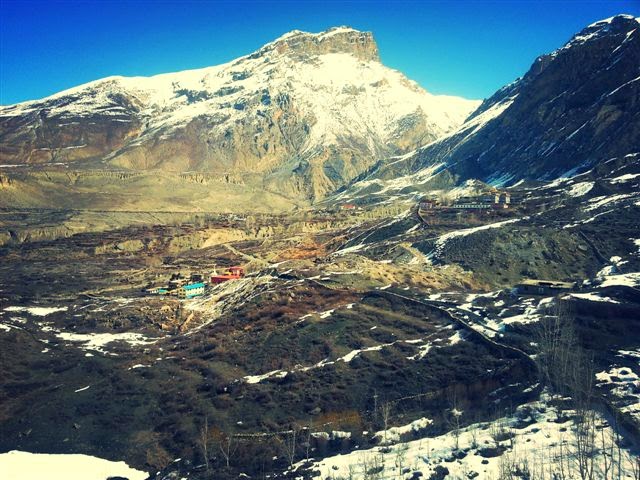 The road has reached Chame from the Manang side and up to Muktinath from the Mustang side, and now it is possible to explore side valleys of the Marsyangdi, Nar and Phu, Gangapurna Glacier, Milarepa Cave and Pisang Peak. Take the alternative route down to Jomsom via Tilicho Lake and over the wild Meso Kanto Pass. All you have to do is make sure that you are well acclimatised. Manang airport has been recently upgraded, it has some of the best bakeries in Nepal and is a great place to just hang out. Linger in Manang, exploring one of Nepal’s most scenic trans-Himalayan valleys. The great thing is that you don’t need to be a professional photographer to take pictures here, even a mobile phone will do. At first glance, I thought this was a polar bear, or an albino yeti. It was the friendly dog of the lodge owner who had come to wish us good luck in our trek over Thorong La. 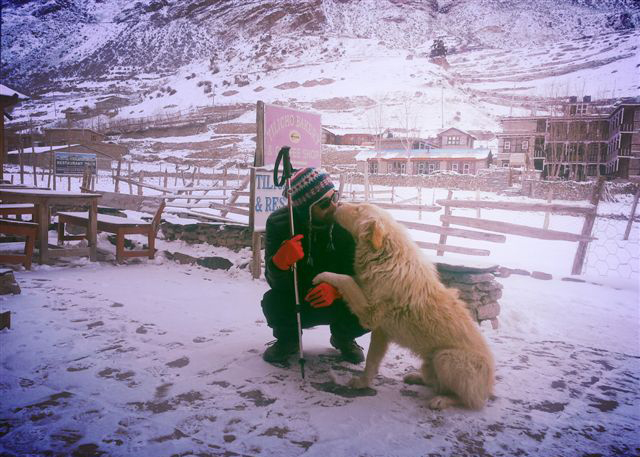 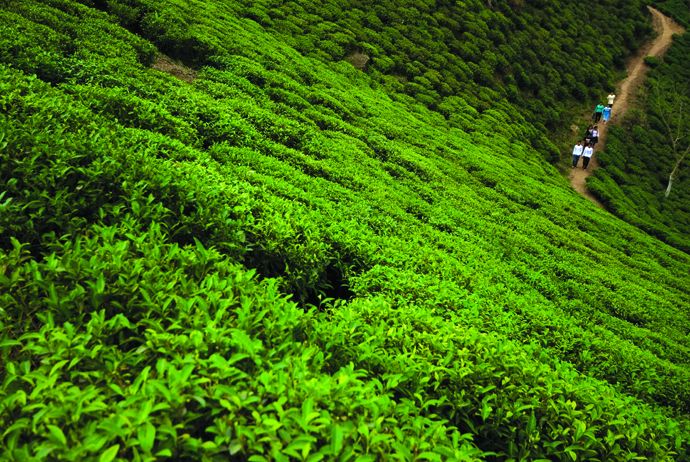 The first thing that comes to mind when you hear the word Ilam is ‘tea’. Indeed, the hills of Nepal’s easternmost district bordering Darjeeling are draped in lush green tea gardens. Most Nepali movies produced in the 1990s had at least one mandatory romantic song filmed in these tea estates. The picturesque Kanyam tea estate still attracts hundreds of picnickers but this scenic district of the east has a lot more to offer than just tea gardens. Few people know that Ilam also has great hiking routes. 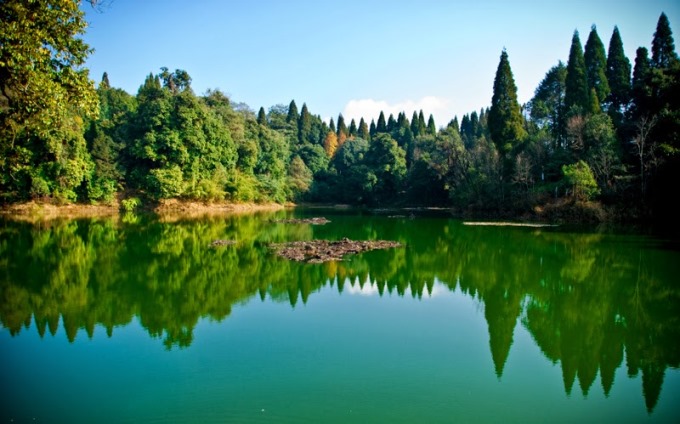 Ilam is home to Mai Pokhari, a listed wetland which spreads over 220 acres and is 13 km from the district capital. Hindu and Buddhist pilgrims from neighbouring districts and bordering Indian towns have been flocking to Mai Pokhari for years but most of them miss out on exploring the rich biodiversity. The lake is home to more than 300 species of birds and a major habitat for tree frog and Himalayan newt, found nowhere else in the world. If you prefer short hikes and treks, a five hour trek to Sadakpur from Ilam bajar offers spectacular view of Kanchanjunga, Jannu, Makalu and Everest. After a day’s hiking, get into one of the cosy tea or thukpa shops in Ilam Bajar and sip on Ilam’s orthodox tea or unorthodox tongba to set you in the frame of mind for another day of exploring. 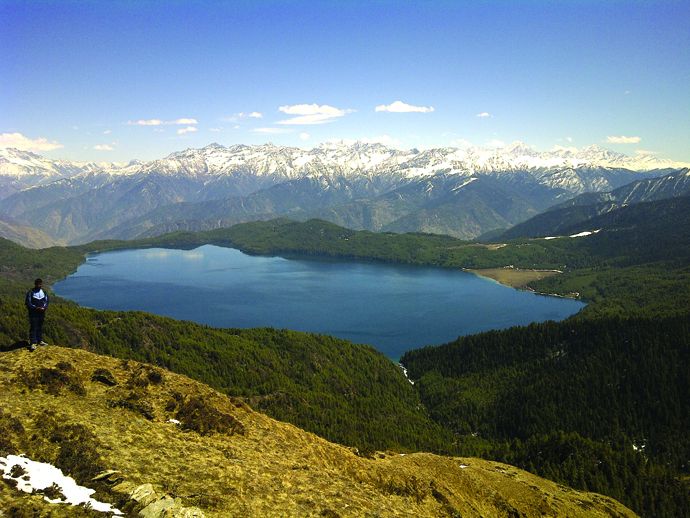 After a steep climb through a scented pine forest, suddenly through the curtain of lichen you see the sun flashing on the lake’s ripples. On the pebbled shore of Rara, you soak in the sight of the inky blue water reflecting the snow mountains and sky beyond. Words fail you, and you are reduced to clichés: picturesque, magnificent, breath-taking.

Designated a national park in 1975, the lake is now home to three endemic species of trout found nowhere else in the world. Nearly 270 out of the 867 species of birds found in Nepal nest here and many more make a brief stopover before they head off north to lakes in Tibet. The pine, juniper and spruce forests contain rare medicinal herbs, and abound in musk deer, red panda and mountain goats. 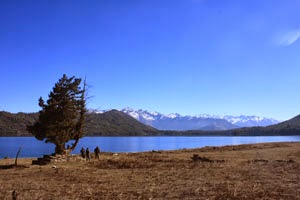 Rara’s serenity and splendour is so lovely it makes your heart ache to think how vulnerable it has become. With the road from Jumla already at the lake’s eastern shore, conservationists fear the worst. Visitors too must go there before it turns into another ‘Lakeside’.

This vast expanse of the trans-Himalaya topographically lies on the Tibetan Plateau but happens to be in Nepal. This is what Tibet looked like before the Chinese or Buddhism got there. 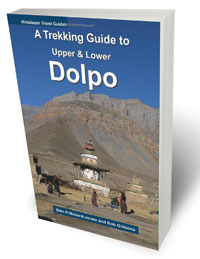 Early explorer-writers like David L. Snellgrove (Himalayan Pilgrimage, 1956) and Peter Matthiessen (The Snow Leopard, 1973) introduced this remote corner of the planet to the outside world. National Geographic followed in 1986 with its pictorial coverage of the Crystal Mountain of Shey Gompa, and then it was Eric Valli’s Oscar-nominated documentary Caravan about the salt traders and their journey across the high passes of Dolpo. Now this remote region is no longer going to be remote with the upgrading of Jufal airport and the road from Jajarkot soon to reach Dunai. A Trekking Guide to Upper & Lower Dolpo is a new guidebook by Siân Pritchard-Jones and Bob Gibbons. Together, the two have written several books on trekking, including one on Manaslu and Tsum. 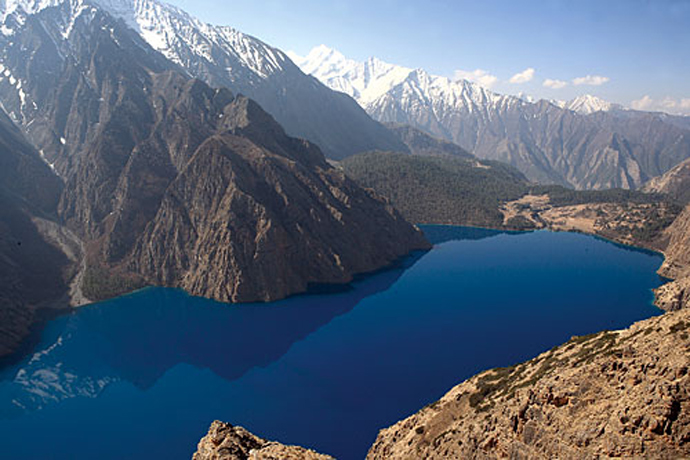 The guidebook offers trekkers options to Nepal’s largest and most-sparsely populated district. You could literally spend months there, or you could rush through it all with a quick dash from Jufal to Phoksundo and back. One could traverse Dolpo from east to west from Myagdi across Kagmara Pass to Jumla. You could trek to Shey and cut across to Mustang, or you could take the Lower Dolpo Circuit and explore Tarap’s monasteries. Imagine Mustang, but even more remote and exotic.

28 August
Wow! It namely likewise fine treatise about JavaScript, babyliss pro curler I dissimilar Your post doesn't acquaint any sense. ray ban outlet uk if information are defined surrounded sketches one can effortlessly be versed with these. hollister sale I think a visualized exhibit can be better subsequently simply a effortless text, chanel espadrilles for sale that why it gives you improved quality. getnjloan.com Can you amuse forward me the code for this script alternatively interest distinguish me surrounded detail among relation apt this script? Vivienne Westwood online get a babyliss perfect curl Very soon this network sheet longing be outstanding among all blog viewers, isabel marant sneakers saleI too prefer Flash,