A two hour drive from Pokhara is the small mountain village of Nagnagini, but its picturesque setting below the Annapurnas masks a severe shortage of water.

Like most other remote parts of Nepal, women and young girls in this village of Tanahu district spend hours fetching water with gagri on their hips. Because of the lack of access to safe drinking water, easily preventable gastric infections are still major killers of children.

Nearly 85 per cent of Nepalis today have access to safe drinking water, and this has been a big improvement from the past. But only 18 per cent of state-run water supply systems are fully functional. With help from the Finland government, five years ago the government launched the Rural Water Supply and Sanitation Project in Western Nepal (RWSSP-WN) to improve access to clean water. 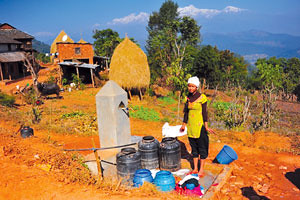 ANNA-KARIN ERNSTSON LAMPOU
SPRING OF HOPE: A young woman from Nagnagini in Tanahun uses a tap nearby her house. Before the solar run water pumps were installed by RWSSP-WN, she would have to walk for hours to collect water everyday.
Part of the solution is technical: installing solar panels to power pumps to lift water directly into villages across nine districts. But in Nepal technology alone is never the answer, so the project tries to work closely with district and village councils to manage and maintain the new systems. To encourage a sense of ownership and responsibility, each household helped with construction and bore one per cent of the costs with the Nepali and Finnish governments providing the rest. However, lack of local elections have meant that VDCs are less accountable to the people.

In some places, the new water system has helped generate income and employs coordinators, engineers, health promoters, technicians, and maintenance workers, many of whom are from local communities. And with water taps now a short walk away, women have more free time which they use to augment their earnings through organic farming, bee keeping, and raising livestock.

RWSSP-WN has made inclusion of women and members of marginalised communities a high priority. Compared to other national-level programs the participation of large number of women in particular is encouraging. The project’s gender and inclusion mobiliser, Sangita Khadka, says changing deep-rooted patriarchal and institutional barriers is an ongoing struggle.

However, poor management and lack of transparency mean that communities have not benefited as much as they should and the long-term sustainability of the project is at risk. Administrators at the DDCs and VDCs show interest during the construction phase, but once the physical infrastructure is in place there is insufficient monitoring of water use and user groups are not provided with technical support. The mechanism to collect water tax from users does not work, maintenance is shoddy, and workers are not always paid on time.

“Construction was the easy part,” admits Amrit Rai, head of the project’s Pokhara office, “but the process afterwards of mobilising and supporting the locals is hard and they aren’t being met.”

In the village of Nabrungdevi where the pumps are powered by electricity instead of solar, two out of the four pumps are out of order and the remaining cannot meet local requirements. Over at Nagnagini, the water supply is sufficient but neither the pumps at the source nor the solar panels are fenced to protect them from pollution and stray cattle and the pipes too are not fully covered. The village is yet to elect a pump operator and so far no fees have been collected.

In Kathmandu, Finland’s ambassador to Nepal, Asko Luukkainen admitted the problems, saying that the lack of locally elected councils affected accountability across Nepal, and was impeding the progress of development projects like the ones in Tanahun.

Luukkainen added: “We have to make decisions based on meetings with government officials, but have no local point of contact. So those decisions are not very democratic and might not be what the communities actually want. This is why local election is so critical.”

The future is a tiny shrub thriving under the apple trees above the Kali Gandaki.
DANIEL LAK

A world of failures

Not a great time in history, but a chance to re-invent ourselves.
DANIEL LAK

The business of death
ARTHA BEED

The new budget features the Beeds pet peeves.
ARTHA BEED
Wow! It namely likewise fine treatise about JavaScript, babyliss pro curler I dissimilar Your post doesn't acquaint any sense. ray ban outlet uk if information are defined surrounded sketches one can effortlessly be versed with these. hollister sale I think a visualized exhibit can be better subsequently simply a effortless text, chanel espadrilles for sale that why it gives you improved quality. getnjloan.com Can you amuse forward me the code for this script alternatively interest distinguish me surrounded detail among relation apt this script? Vivienne Westwood online get a babyliss perfect curl Very soon this network sheet longing be outstanding among all blog viewers, isabel marant sneakers saleI too prefer Flash,