The rugged Canadian plane has been the workhorse of Nepal’s domestic aviation for four decades, but has suffered terrible attrition OTTER TWINS: The first two Twin Otters of Royal Nepal Airlines in happier times at Lukla Airport in 1972. Both have crashed.
The hardy Canadian-built DHC-6 Twin Otter was designed for flying in the challenging environment of countries like Nepal with rough and short airfields carved out of mountain sides. Pilots say the plane handles well, needs minimal maintenance, is built to last, and can take a lot of punishment. Which must be why Twin Otters are affectionately called ‘Land Rovers with wings’.

However, even a plane like this doesn’t tolerate careless and reckless flying. Because it has been built to operate in difficult terrain and extreme climates like the Canadian Arctic, or the high mountains of Papua New Guinea it has seen more crashes than other types of planes.

In all, 25 Twin Otters have operated in Nepal of which 16 have crashed. Nepal Airlines (formerly known as Royal Nepal Airlines) has lost 70 per cent of its Twin Otter fleet since it started operating the aircraft in 1972. The state-owned airline has owned 12 Twin Otters in the last 43 years, of which only one is airworthy today. Of the other four that haven’t crashed, three are sitting engine-less in the hangar in Kathmandu and one has been leased to Yeti. 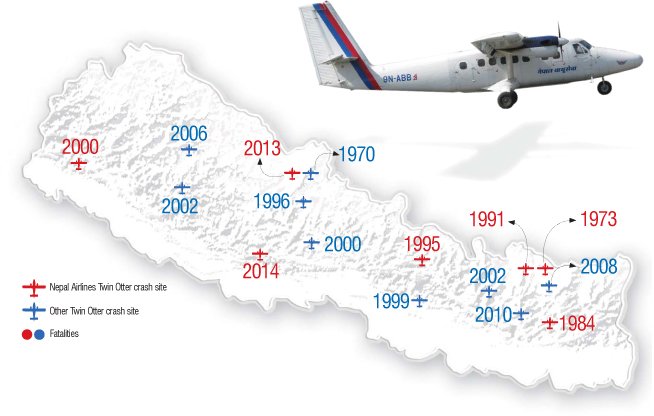 The plane that crashed on Sunday on Masine Lek of Arghakhanchi district with the loss of 18 lives was registered 9N-ABB and was one of the two first Twin Otters that Royal Nepal Airlines introduced in 1972 to replace its World War II vintage DC-3 Dakotas.

Even before Nepal Airlines, the Royal Flight service had bought an older model Twin Otter with registration 9N-RF9, which came to grief less than a year after entering service. Later, the Nepal Army also bought a Twin Otter (RAN 26), which also crashed in Jomsom in 1983.

Much has been made of the fact that the plane that went missing this week was 43-years-old. But Twin Otters are so sturdy that the unpressurised plane can fly safely as long as its maintenance and flight protocols are strictly followed. Some of the fleet of amphibian Twin Otters flying for the Maldivian Air Taxi, for instance, are more than 45-years-old.

Of all the crashes of various models of aircraft in Nepal since 1955, 90 per cent have been what is technically known as CFIT (Controlled Flight Into Terrain) in which a disoriented or careless pilot flies a plane into a mountain hidden in clouds. In fact, none of the Twin Otters that have crashed in Nepal have gone down primarily because of a technical malfunction. Nearly all have been due to human error.

Nepali pilots have won international praise for effortlessly landing short takeoff and landing aircraft on precarious runways like in Lukla or Talcha. However, the fact that so many of the crashes have happened on takeoff or final approach shows that the training and experience pilots should have to fly in the challenging operating environment of the Himalaya need to be re-evaluated.

Except for the crash on a flight from Pokhara to Kathmandu of a Necon Air HS-748 in 1999, there have been no major mishaps on trunk routes to and from Kathmandu in the past 30 years. It is the extreme difficulty of flying in the mountains in bad weather that makes travelling to remote area airfields so dangerous.

Aside from topography and weather, there are other factors that have contributed to Nepal’s dismal air safety record. Overloading aircraft due to corruption of ground staff has been the reason for at least one Twin Otter crash and has been cited in crashes of other aircrafts in remote areas.

But it is not just flying that is dangerous in Nepal, the country’s rate of highway accidents is one of the worst in the world. Modern technology needs a strict adherence to rules on operational safety and maintenance, something that is glaringly lacking in Nepal. Rules are routinely broken, shortcuts are the norm, bravado and macho-ness are on open display on the roads. These traits can be disastrous when manifested in the cockpit.

Combined with other factors like ageing equipment, cash starved airlines cutting corners on spares, and cut-throat competition, it is not surprising that Nepali operators have been blacklisted by the EU.

Given that so many disasters are due to pilot error and CFIT, it should now be mandatory for all domestic planes to only fly VFR (Visual Flight Rules) without exceptions. Planes must be required to have Enhanced Ground Proximity Warning systems on board, de-icing equipment, and weather radar.

But even with these additional safety measures, nothing can save us from carelessness. There is no excuse anymore for the criminal negligence and the loss of more lives.

Flight safety in the monsoon

Once is not enough?

Tough tasks lie ahead for constitution writing, so Dahal's continued leadership of the sub-committee debating issues is important
DAMAKANT JAYSHI
Wow! It namely likewise fine treatise about JavaScript, babyliss pro curler I dissimilar Your post doesn't acquaint any sense. ray ban outlet uk if information are defined surrounded sketches one can effortlessly be versed with these. hollister sale I think a visualized exhibit can be better subsequently simply a effortless text, chanel espadrilles for sale that why it gives you improved quality. getnjloan.com Can you amuse forward me the code for this script alternatively interest distinguish me surrounded detail among relation apt this script? Vivienne Westwood online get a babyliss perfect curl Very soon this network sheet longing be outstanding among all blog viewers, isabel marant sneakers saleI too prefer Flash,