One year after the Seti flood, victims learn to cope
Cindrey Liu In Kaski, 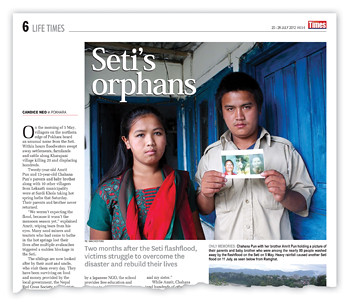 SURVIVORS: Chahana Pun and her brother, Amrit, in a Nepali Times story last year holding up pictures of their parents and little brother who were killed in the flood.
It was Saturday morning of 5 May last year and many picnickers from Pokhara had come to the hot springs at Sardi Khola for a dip. Chahana Pun, 13, her family, and neighbours were also by the riverside.

Suddenly there was a roar from the north, the Seti River had turned into a brown wall of mud, boulders, and tree trunks. Chahana’s parents and baby brother were washed away and only she and her elder brother Amrit survived.

One year on, 20-year-old Amrit still doesn’t have a job. Chahana was taken in by a local school and given free education. “I feel sad remembering my parents and little brother, but I am happy in my new school and I don’t have to worry about anything,” she told us.

This was before the monsoon, so the sudden flood took villagers and tourists by complete surprise. It is now known that the flood was caused by a rockfall that broke off Annapurna IV, triggering an ice avalanche that roared down the Seti River (see box). The flood killed at least 63 people, three of them Ukrainian tourists. Twenty-one families lost their homes. Farms, bridges, roads, powerlines, and water pipes were swept away.

Five days after the flood, Jaya Ram Poudel of the non-profit L Angel School in Lamachour visited Kharapani, the village ravaged by the flood. Chahana was offered free education, as were Amar Tamang, 7, and Fal Bahadur Tamang, 5 who lost their mother. Soon after the flood, their father had remarried and abandoned them.

“If we did not help them, they would have ended up on the streets or become child workers,” Jaya Ram explained.

Relief and offers of help poured in from across Nepal. The government and the local community sprung into action, to provide up to Rs 100,000 for the family of every deceased, Rs 10,000 for every orphan, and offered shelter and education for the families affected.

“The flood was completely unexpected, but the government and private sector responded very quickly,” Kaski CDO, Yadabraj Koirala, told Nepali Times on Tuesday. Indeed, compared to the slow response to other disasters, Seti has become a model for effective relief and rehabilitation. 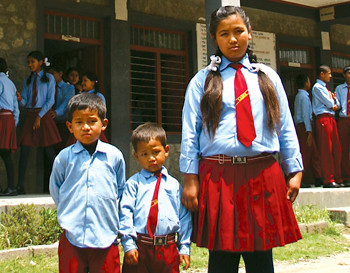 CINDREY LIU
One year later, Chahana is getting free schooling with orphan brothers, Amar and Fal.
While the government’s response was commendable, it was the contribution of the surrounding communities and Pokhara that was most impressive. More than 26 groups, including youth clubs, mother groups, cooperatives, and hotel associations pitched in to help.

Reporters from Radio Annapurna FM in Pokhara were among the first at the scene of the flood and their station started the Annapurna Relief Fund and broadcast an appeal. Listeners pledged Rs 6.4 million and part of it was distributed to those who had family members missing, since the government’s cash grants only went to those whose bodies were found. The rest of the money was used to house nine families whose homes had been washed away.

The Samudayik Sewa Kendra, a joint drive of police and residents of Kaski, raised money and distributed it to 46 children who lost family members in the flood. “Children are the weakest and need the most support from the community,” explained Sita Gurung, of the community group, which is going to continue its support as the children grow up.

While homes have been built and money distributed, livelihoods have not. Those who were resettled are grateful for their new homes, but they have no jobs, no livestock and farms, and are struggling to survive. Says 55-year-old Man Bahadur Pun: “We are thankful for the houses, but it is worrying that there is never enough food.”

What would help would be to repair the bridge across the Seti so they can go back to their land, and skills training so they can earn money.

For those who lived through last year’s terrifying flood on the Seti, the challenge now is to live from day to day.

One year after, a photo gallery by Cindrey Liu 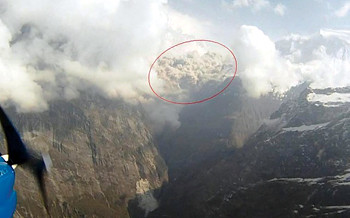 AVIA CLUB NEPAL
Capt Alexander Maximov was flying his small blue single-engine Aeroprakt up the Seti River with a tourist passenger on the second sightseeing flight of the day on 5 May 2012. There were puffs of white clouds above the Annapurnas. Then he noticed something strange, a mass of billowing brown cloud rising above the headwaters of the Seti below Annapurna 4 (pic, right).

As he turned south to head back to Pokhara, he noticed that the Seti River below him wasn’t its usual white colour, but swollen and brown. Putting two-and-two together, Maximov knew it was a flashflood and immediately radioed Pokhara airport that “a big water” was coming down the Seti. The air traffic controller alerted security agencies and FM stations. If there hadn’t been that half-hour pre-warning, many more people may have died that day.

Maximov’s wingtip camera that was recording the flight has now become part of the vital record of the event that has allowed geologists and glaciologists to analyse the flood. The conclusion is that a large chunk of the rock face and ice cornice on the 7,525m high Annapurna IV gave way, falling 2,000m onto an ice shelf below, triggering an avalanche that plunged into the Seti gorge. Before and after images from NASA’s Landsat also show the entire Seti basin covered with dust as the estimated 22 million cubic metres of rock pulverised. The rockfall wasn’t caused by an earthquake, but triggered a seismic event that was strong enough to register at the Lamont-Doherty Earth Observatory in the US.

Whatever the permutations, a sustainable deal to share power is unlikely
PRASHANT JHA

Shutting down private schools will perpetuate hereditary feudalism, not eliminate it
ASHUTOSH TIWARI

Development can also be about embracing the past
Wow! It namely likewise fine treatise about JavaScript, babyliss pro curler I dissimilar Your post doesn't acquaint any sense. ray ban outlet uk if information are defined surrounded sketches one can effortlessly be versed with these. hollister sale I think a visualized exhibit can be better subsequently simply a effortless text, chanel espadrilles for sale that why it gives you improved quality. getnjloan.com Can you amuse forward me the code for this script alternatively interest distinguish me surrounded detail among relation apt this script? Vivienne Westwood online get a babyliss perfect curl Very soon this network sheet longing be outstanding among all blog viewers, isabel marant sneakers saleI too prefer Flash,