As Deuba orders authorities to bury street sinkholes, a political sinkhole is forming and threatens to swallow the Constitution 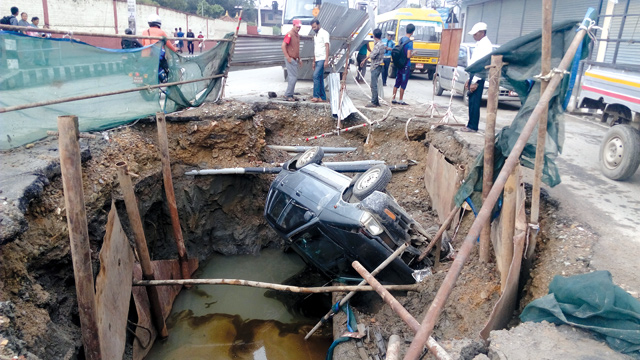 It took the death of a school girl and a scary viral video of another girl falling into an overflowing drain for Prime Minister Sher Bahadur Deuba to see pits and potholes on the streets of Kathmandu.

After a downpour last Friday, most of Kathmandu's streets were flooded and 10-year-old Binita Phunyal failed to see a drain deluged with water. She fell into it, was swept away and died. The same day, 13-year-old Satya Sapkota was sucked into a whirlpool that formed inside a cesspit, but was rescued alive. Her near death was captured in a mobile video, which went viral on social media.

The next day, PM Deuba directed top authorities to work day and night to fill all holes on Kathmandu’s streets within 15 days. But there are too many pits, potholes and even sinkholes to be filled in such a short time.

In the wee hours of Thursday, a car plunged into a sinkhole in Maharajganj, leaving three injured. Early in the week, a buffalo fell into another sinkhole in Chabahil, and needed to be pulled out with a crane. Last month, three construction workers died after falling into a trench they dug to lay water mains for the Melamchi project.

Years of political instability, lack of accountability and a sluggish bureaucracy have rendered the Kathmandu Valley virtually unliveable, and an order by the PM will not transform the city overnight.

If anyone can improve the city (not just Kathmandu), it is a mayor and his/her team of elected representatives. The Constitution that PM Deuba and Maoist Chair Pushpa Kamal Dahal are trying to amend in order to appease Tarai-centric parties has given newly elected mayors and village council chiefs unprecedented power and autonomy.

But four draft bills on local governance and inter-governmental fiscal transfer have threatened to weaken self-governing local councils by robbing them of their constitutional rights to mobilise local resources.

"These draft bills aim to foil federalism and revert the country to the unitary system," says Balananda Poudel, who headed the Local Body Restructuring Commission. If local governments lack resources, they will fail to deliver development and good governance. And cities like Kathmandu will remain badly governed.

It seems the ruling NC-Maoist coalition has not realised that their conspiracy to weaken local councils will return to haunt them. And the opposition UML that emerged as the biggest party at the local level after the first two rounds of civic polls is not bothered, either.

PM Deuba seems to have other priorities. Six weeks into his fourth tenure as PM, he is still struggling to expand his cabinet because there are too many aspirants for limited ministerial berths. And the Ram Chandra Poudel camp of his NC party has refused to settle for less than 40% of posts.

Deuba is also trying to induct Kamal Thapa's RPP into the cabinet, hoping that he could then secure the two-thirds majority necessary for the constitutional amendment. But the RPP has its own problems, with veteran leader Prakash Chandra Lohani splitting and Pashupati Shamsher Rana threatening to do so.

This week, Deuba informed the Madhes-based RJP that amending the Constitution is not possible now. The RJP knew it before, but is still against taking part in remaining local, provincial and parliamentary elections.

As Deuba orders authorities to bury street sinkholes, a political sinkhole is forming and threatens to swallow the Constitution. Whether the country will smoothly transition to federalism or fall into the hole largely depends on how astute the four-time PM will be. But even his erstwhile aides are complaining that Deuba is not as active today as he was in his previous tenures.

No ifs and buts

Old traditions that banish women to outhouses during their periods die hard in mid-western Nepal despite literacy and affluence
RUBEENA D SHRESTHA in ACHHAM
Wow! It namely likewise fine treatise about JavaScript, babyliss pro curler I dissimilar Your post doesn't acquaint any sense. ray ban outlet uk if information are defined surrounded sketches one can effortlessly be versed with these. hollister sale I think a visualized exhibit can be better subsequently simply a effortless text, chanel espadrilles for sale that why it gives you improved quality. getnjloan.com Can you amuse forward me the code for this script alternatively interest distinguish me surrounded detail among relation apt this script? Vivienne Westwood online get a babyliss perfect curl Very soon this network sheet longing be outstanding among all blog viewers, isabel marant sneakers saleI too prefer Flash,