Today, Singati has the look of a boomtown again, there is concrete being laid, houses are being rebuilt, carpenters are busy

Very few people had heard of Singati before the earthquakes of April-May 2015. Today, this settlement in Dolakha district is seared in the national memory because of the images of death and destruction two years ago.

Dozens were buried under the rubble when the 7.8 magnitude earthquake struck on 25 April, and the 7.3 aftershock on 12 May brought rockslides down on hundreds of survivors queuing up for food and relief supplies. In all, it is estimated that 200 people lost their lives here in the two quakes.

No one used to live here because Singati was a cremation ground at the confluence of the Tama Kosi and Bhote Kosi and people thought it was haunted. But when the road was built to service several planned hydropower projects on the rivers, Singati grew quickly and had the look of the wild west. 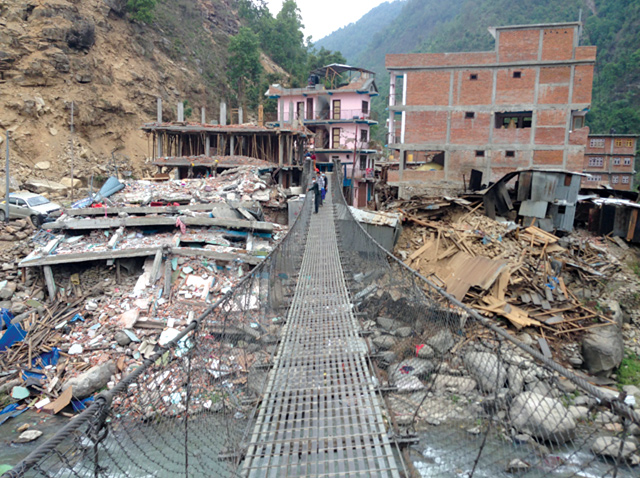 DIPESH KHATRI
RISING FROM THE DUST: The bridge over the Tama Kosi in Singati in May 2015 and new construction along the bazar this week. 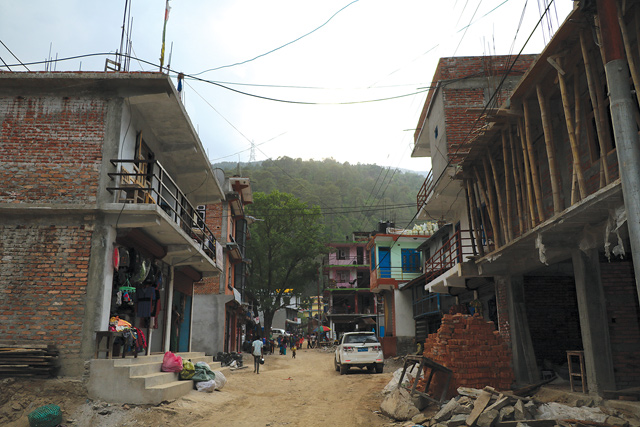 The flimsy concrete buildings collapsed like houses of cards when the earthquakes struck, the weakened structures that survived the first quake went down in the second. Others were buried as the mountains came crashing down onto the roads and villages along the river.

Today, Singati has the look of a boomtown again. There is concrete being laid, houses are being rebuilt, carpenters are busy. “We never imagined Singati would grow into a city like this,” says Binod Tamang, who is only 28 but still remembers Singati consisting of a few timber buildings.

There are at least four new hydropower plants coming up, with the 465MW Tama Kosi III slated for completion next year after delays caused by the earthquake and Indian Blockade. Further upstream is the site of the 900MW Upper Tama Kosi dam which will inundate a part of the Valley. There are four other projects on other rivers in Dolakha.

The trail to Rolwaling is being repaired, and when it opens for trekking the region is expected to rival the Annapurna. Singati will benefit because of its market. Further into the future, if the Lamabagar route to Tibet is made motorable, Singati would be along a new transit route between Nepal and China.

The biggest obstacle to speedy reconstruction, as elsewhere, is the delay in disbursement of housing grants. “The Rs 300,000 is only enough for a stop-gap house, so they should just give that out and let people build sturdier temporary shelters,” says Tamang.

The other reason for the delay is that even if people have money, there aren’t enough masons, carpenters and construction workers. There are so few young men in the surrounding villages that workers are not available even if the daily wage is Rs 1,000 with food.

Every household here in Singati has someone working in Malaysia or the Gulf, and the remittance they send home is what is paying for the rebuilding, not the government grant. “I don’t know why people are migrating to Malaysia: they can easily earn as much here on reconstruction,” says Dolakha District Coordination Committee sub-engineer, Lila Jirel.

The wild white waters of Himalayan rivers wait for riders

Nepal and Bangladesh share an endangered art form
ABHA ELI PHOBOO
Wow! It namely likewise fine treatise about JavaScript, babyliss pro curler I dissimilar Your post doesn't acquaint any sense. ray ban outlet uk if information are defined surrounded sketches one can effortlessly be versed with these. hollister sale I think a visualized exhibit can be better subsequently simply a effortless text, chanel espadrilles for sale that why it gives you improved quality. getnjloan.com Can you amuse forward me the code for this script alternatively interest distinguish me surrounded detail among relation apt this script? Vivienne Westwood online get a babyliss perfect curl Very soon this network sheet longing be outstanding among all blog viewers, isabel marant sneakers saleI too prefer Flash,