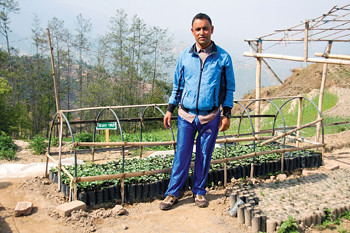 CINDREY LIU
A two hour bus ride from the capital past wheat and mustard fields that turn the hillsides into a mosaic of green and yellow comes Patlegaun in Kavre. At first glance, the village is like any other. But this is where 35-year-old Govinda Ghimire (pic), owner of Patlegaun Organic Farm, is building his brand of organic vegetables and fruits which are exported as far as Australia and the UAE.

Having studied only till Grade 3, Ghimire started working as a porter when he was just 12 and then moved to Kathmandu to become a cook. “My father couldn’t afford Rs 10 for the exam fees, so I could not continue my education,” he recalls.

He returned home to Kavre in 1996 after hearing about Organic Himalaya Nepal, a farm started by Hans Hofer, a German publisher and his Singaporean wife, Cynthia Wee. He worked on their farm which exported products to markets in Singapore that were run by Organic Himalaya.

Ghimire first started as a cook and farmhand and learnt how to make butter, jam, cheese, and juice from Luis Gasser, an Italian supervisor of the farm who had a degree in agriculture. Govinda took over after Gasser left and became an expert guide giving visitors tours of the garden so they could see the production process firsthand. But everything changed during the war.

A few years into the conflict, the Maoists threatened to seize lands around Kavre and Ghimire got together a group of farmers to drive them off. But then he was arrested by the Army on suspicion of being a Maoist sympathiser and detained. After the conflict ended, he was freed and managed to build a new life through his Patlegaun Organic Farm. 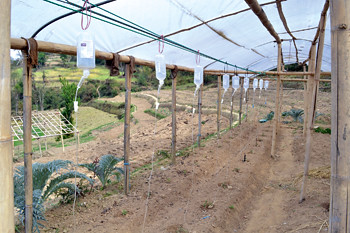 SUNIR PANDEY
Today Govinda grows barley, strawberries, tomatoes, avocados, and cabbages that are as popular in Dhulikhel as they are in Dubai and Singapore. He uses natural compost and locally available herbs as pesticide and conducts rotational cropping to increase the fertility of the soil. To save water and lessen dependence on fertilisers, the crops are irrigated through drip technology (pic, right). Through the years, Ghimire hasn’t forgotten the basics he learnt from his mentors: conserve agricultural biodiversity and treat farming with a high level of professionalism.

“I was lucky to have Hans and Cynthia as my teachers,” Govinda says, “now I can afford to send my children to school and my 17-year-old son says he is interested in studying agriculture. I hope he will take over my farm in the future.”

Ncell featured Ghimire in its campaign to extend connectivity in rural areas. Now every time the farmer sees his photo in newspapers, his face breaks into a wide grin as he remembers his extraordinary journey from a porter to a successful entrepreneur.

If you think 2005 will be any better, think again
ARTHA BEED

The violence during the Bharatpur temple incident highlights the tenuousness of Dalit rights
LAURIE ANN VASILY in BHARATPUR
Wow! It namely likewise fine treatise about JavaScript, babyliss pro curler I dissimilar Your post doesn't acquaint any sense. ray ban outlet uk if information are defined surrounded sketches one can effortlessly be versed with these. hollister sale I think a visualized exhibit can be better subsequently simply a effortless text, chanel espadrilles for sale that why it gives you improved quality. getnjloan.com Can you amuse forward me the code for this script alternatively interest distinguish me surrounded detail among relation apt this script? Vivienne Westwood online get a babyliss perfect curl Very soon this network sheet longing be outstanding among all blog viewers, isabel marant sneakers saleI too prefer Flash,