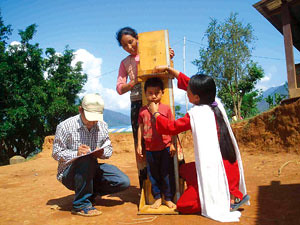 NEW ERA
It has been a decade since Agriculture Program Services Centre (APROSC) closed, but there has been no efforts to revive it or establish a similar research agency. In the last 20 years social research in Nepal has taken a back seat, making it difficult to understand Nepali society’s changing dynamics.

Although there are about 200 private research firms across the country, increasing political interference and lack of neutrality worries many. Professor Haridhwoj Pant of Tribhuvan University’s Centre for Economic Development and Administration (CEDA) says that research and investigation in Nepal are no longer as independent as they used to be. “People conduct research these days to use up donor money and to ‘prove’ the legitimacy of their their policies and programs,” admits Pant, “there is no research for the sake of studying and understanding Nepali society and culture.”

Swedish researcher Toni Hagen was one of the first people to conduct scientific studies in the region. He was followed by local pioneers like Harka Gurung who opened up a wealth of knowledge about the country’s geography and demographics. His concept of regional development during his tenure at the National Planning Commission resulted in the formation of five development regions.

With the establishment of CEDA in the 1969 many research agencies followed like Centre for Nepal and Asian Studies (CNAS), Research Centre for Applied Science and Technology (RECAST), Centre for Educational Innovation and Development (CERID) under the Tribhuvan University. However, political appointments in the TU has led to a sharp downfall of these centres. Many well-qualified research associates were either transfered, or moved abroad or started their own private firms in hopes of a better and more secure future. Cuts in state funds have onlymade things worse.

“The government’s apathy has stunted the growth of research culture in Nepal,” says Mahesh Baskota, dean of Kathmandu University’s school of arts says,Tribhuvan University saw many protests and closures in last August because of the differences of UCPN(M), UML, and Nepali Congress over appointment of the university’s dean. Research centres that were working without chairs until recently had all posts filled as per the power sharing agreement between major political parties. CEDA has Ram Chandra from UCPN(M), CNAS has Naniram Khatri from Congress, RECAST has Ram Prasad Chowdhary from Madheshi Morcha and Krishna Chandra Sharma from UML has been appointed as the executive director for CERID.

Professor Pant is sad to see the sorry state of social research in Nepal and says while parties are busy playing politics and dividing the funds, the loss of knowledge is hurting the entire society. “Since all appointments, plans, and projects have to be approved by politically affiliated groups, research has lost its integrity, but no one seems to care about the long-term damage,” concludes Pant.

SOMEPLACE ELSE by RUBY TUESDAY

The Chinese adaptation of the 1988 film is worth watching for its elegant, restrained filmmaking that brings to life the abjectness that can accompany falling in love
SOPHIA PANDE

India's secularism did not kill Bal Thackeray, death did
AJAZ ASHRAF
Wow! It namely likewise fine treatise about JavaScript, babyliss pro curler I dissimilar Your post doesn't acquaint any sense. ray ban outlet uk if information are defined surrounded sketches one can effortlessly be versed with these. hollister sale I think a visualized exhibit can be better subsequently simply a effortless text, chanel espadrilles for sale that why it gives you improved quality. getnjloan.com Can you amuse forward me the code for this script alternatively interest distinguish me surrounded detail among relation apt this script? Vivienne Westwood online get a babyliss perfect curl Very soon this network sheet longing be outstanding among all blog viewers, isabel marant sneakers saleI too prefer Flash,