The Digital Himalaya Project is a collection, storage and dissemination portal for scholarly content and research findings about the Himalayan region and was established in December 2000 in the Department of Social Anthropology at the University of Cambridge. 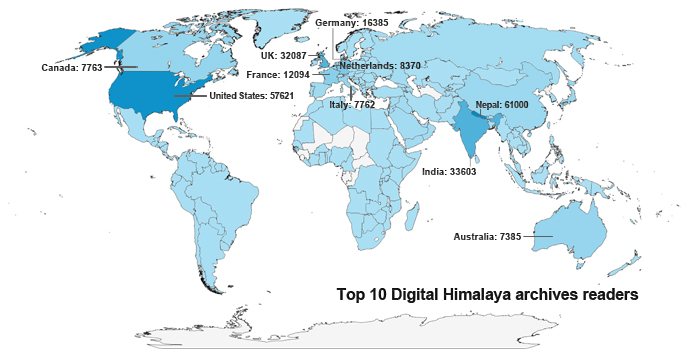 While the project began as a strategy for collecting and protecting the products of colonial-era ethnographic collections on the Himalaya for posterity and for access by heritage communities Digital Himalaya has now become a collaborative digital publishing environment, bringing a new collection online every month.

The website has grown from being a static homepage with occasional updates to a dynamic content delivery platform for over 40GB of archival census data, maps, films, audio recordings, photographs, journals and scanned books. We have also witnessed dramatic changes in the profile of visitors to our site: from (overwhelmingly) members of European and American universities in the early years, to a well networked, global and digitally literate user community, in particular from South and Inner Asia.

Almost all of our digitisation and scanning is now conducted in Nepal and our funding no longer comes from national funding councils in the UK and USA, but through Web referrals and from individual or institutional donations around the world.

There appear to be two reasons for the high number of web visitors that we have from South Asia. First, many users in South Asia have leapfrogged in terms of their access to and the affordability of new technology, moving from dialup to broadband services in just a few years. A generation of ‘born digital’ young Indians, Nepalis, Bhutanese and Tibetans are now downloading and using our content.

Second, a consequence of the poor state of many university and public libraries in parts of Asia is that students and teachers often have limited access to print collections and catalogues—even of material that was originally published in their own country. Weather conditions detrimental to collections and under-resourced libraries combine to make free, online access as provided by Digital Himalaya particularly attractive to scholars based in the Himalayan region.

Digital Himalaya is now the online host (or co-host) for 40 journals, magazines and publications of Himalayan studies. Some publications are regular, others are occasional and poorly distributed, while a number are defunct or orphaned publications with a large collection of back issues.

We are particularly proud of our partnership with Nepali Times as Digital Himalaya boasts a complete back archive of each and every issue of this important English weekly since July 2000—the year that both our archive and the paper were established. The Nepali Times collection of 700 issues is 2.5 GB in size, updated every Saturday morning, and housed on secure servers at the University of Cambridge. It is regularly accessed by an average of 300 visitors a day and has more users in Nepal than in all of Europe combined.

It’s a pleasant surprise to discover that what started as an academic research project 14 years ago, has become a vast online portal for hosting and disseminating knowledge about the Himalayan region to a global and fast-growing user base.

The captain of the Nepali women's football team is taking huge strides and driving the game to greater heights
BHRIKUTI RAI IN MORANG
Wow! It namely likewise fine treatise about JavaScript, babyliss pro curler I dissimilar Your post doesn't acquaint any sense. ray ban outlet uk if information are defined surrounded sketches one can effortlessly be versed with these. hollister sale I think a visualized exhibit can be better subsequently simply a effortless text, chanel espadrilles for sale that why it gives you improved quality. getnjloan.com Can you amuse forward me the code for this script alternatively interest distinguish me surrounded detail among relation apt this script? Vivienne Westwood online get a babyliss perfect curl Very soon this network sheet longing be outstanding among all blog viewers, isabel marant sneakers saleI too prefer Flash,