Forging electoral alliances in Nepal is getting to be far more difficult than solving a Rubik’s Cube. 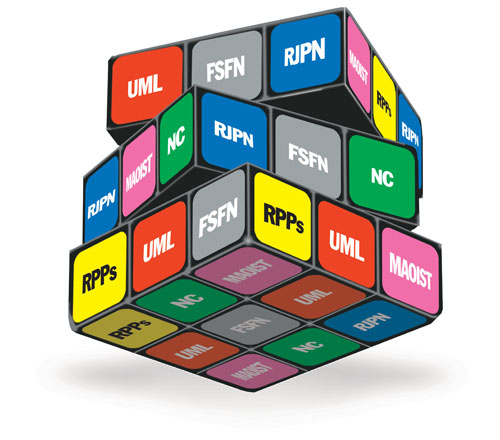 Forging electoral alliances in Nepal is getting to be far more difficult than solving a Rubik’s Cube.

While most people are immersed in Tihar-Chhat festivities, political leaders have had to stay up late at night to finalise candidates for Provincial and Parliamentary elections in November and December. It is not an easy job to balance factional interests with the needs to preserve electoral alliances.

Two weeks after announcing their alliance, the UML and Maoist (Centre) are still struggling to divvy up seats, even after the exit of Baburam Bhattarai’s Naya Shakti party. An intense battle is raging, not just within the Left Alliance, but also within its constituent parties between rival factions.

For example: the Maoists want the single-constituency Bhojpur for Gopal Kirati, who initially opposed the Left Alliance calculating that the deal might hurt his ambition to become Chief Minister of Province 1. UML Chair KP Oli has hinted that the Maoists can take Bhojpur, figuring that a deal could secure the political future of his acolyte Sher Dhan Rai at the expense of Rajendra Rai, who is backed by his party rival, Madhav Nepal.

Nepal’s two largest communist parties, who say they will unite after the polls, are also in direct competition for seats in many other districts.

Squeezed out of the Left Alliance, Bhattarai has gone over to the NC’s fold to help him win his home constituency of Gorkha-2. He has promised to support NC in Gorkha-1, but its cadres are unsure if it will be a good deal, given Naya Shakti’s humiliating defeat in the recent local polls.

After the surprise announcement of the Left Alliance, the NC is desperately trying to cobble together a ‘democratic’ alliance, tying up not just with Hindu royalists but even with fringe nationalist parties like Akhanda Nepal. The NC has welcomed Bijaya Gachhadar back into its fold, but forging partnership with other Madhes-based parties looks difficult. The RJPN and the FSFN have formed their own alliance in the Tarai, and are ready to partner with the NC only where they are weak.

Some of these are unholy alliances because parties are joining hands with those charged with, and even found guilty of, crime and corruption. Some parties are selling tickets to highest bidders, leaving their ideologically-committed cadre disillusioned.

The alliances could still go in any direction before Sunday’s nomination deadline. But no matter who wins the polls in 32 mountain districts on 26 November and in the remaining districts on 7 December, it looks like the new Parliament and Provincial Assemblies will be dominated by those most responsible for the current state of the country.

Flying over and around the Himalaya
EAST WEST with KUNDA DIXIT

In 2066, Nepal became less independent than ever before in its history
BHEKH B THAPA
Wow! It namely likewise fine treatise about JavaScript, babyliss pro curler I dissimilar Your post doesn't acquaint any sense. ray ban outlet uk if information are defined surrounded sketches one can effortlessly be versed with these. hollister sale I think a visualized exhibit can be better subsequently simply a effortless text, chanel espadrilles for sale that why it gives you improved quality. getnjloan.com Can you amuse forward me the code for this script alternatively interest distinguish me surrounded detail among relation apt this script? Vivienne Westwood online get a babyliss perfect curl Very soon this network sheet longing be outstanding among all blog viewers, isabel marant sneakers saleI too prefer Flash,