What happened in Namibia was news not only in Nepal, it was described by ESPN as ‘one of the most miraculous endings to an ICC tournament match at any level 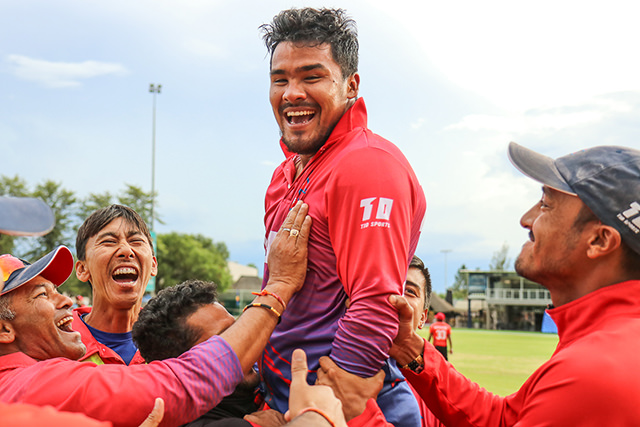 ICC
Karan KC pulled off a feat no one thought possible in cricket, and put Nepal in the qualifiers for the 2019 Cricket World Cup. Seen here in Windhoek on Wednesday being congratulated by captain Paras Khadka (right) and Shakti Gauchan (behind) while coach Jagat Tamata is ecstatic.

A Canadian living in Kathmandu, I woke up Thursday to the headline news in all the dailies that Nepal had defeated Canada in cricket.

My family in Canada woke up to read about another murderous shooting spree in the neighbouring US, a new government initiative for the country’s indigenous people, and a political leader in the province of Ontario claiming to be the target of a conspiracy.

To state the obvious, cricket is not big news in Canada. In fact, it doesn’t even rate its own page on the website of CBC, the national broadcaster. Athletics, tennis, swimming, cycling, rugby and volleyball are all there. No cricket. Ask Canadians what they think of when they hear ‘cricket’ and the vast majority will mention a hopping, chirping insect.

I consider myself fairly sports-minded. As a child, I played organised soccer and basketball for years, and tennis, baseball and a bunch of other sports for fun. But I didn’t see my first live cricket match until I was in my 30s in Ottawa, on the grounds of the Governor-General’s residence. Not exactly mainstream Canada.

A Google search of Wednesday’s Nepal-Canada match yields no results that are obviously Canadian in origin. This week all Canadian sports fans’ eyes are on the winter Olympic Games, where Canada currently stands 4th in the medal count – with the gold still to be awarded in ice hockey, the most Canadian of sports (although more of us actually play curling. Yes that’s right, curling – and it has nothing to do with hair, though ice, again, does play a major role).

I skimmed Thursday’s headline news long enough to learn that Nepal had pulled off a last-minute win. ‘Nepal needed eight runs off the final over and after four dot balls in a row…’ I read as my eyes started to glaze over. I get the basics of cricket, but it’s the nuances that count for sports fans, and I was lost at ‘dot balls’.

What happened in Namibia was news not only in Nepal, it was described by ESPN as ‘one of the most miraculous endings to an ICC tournament match at any level as Karan struck an unbeaten 42 off 31 balls, including eight off the final two balls’. So the match actually made cricket history -- it wasn’t just a victory for Nepal.

I turned the page and glanced at headlines about the UML and the Maoist Centre reaching an agreement, and Prime Minsiter Deuba’s address to the nation which was cancelled at the last moment. Former health minister Gagan Thapa was chastising the government for not enforcing regulations against tobacco sales and advertising. Working in public health, that was something I could understand. I settled in for a read.

That the biggest disaster of all doesnt come from the sky, the sea or the earth, but from poverty.
DANIEL LAK

The scapegoats of Dasain

It is that time of year again: mountain goat, sheep, duck, chicken, water buffalo are all lining up for the Great Dasain Massacre this week.
SALIL SUBEDI

Nepals first railway container terminal is finished, but there are no trains because Kathmandu and New Delhi cant get their act together.
BNOD BHATTARAI

How many more bodies?

The Maoist revolution has suddenly moved to fast-forward
SUDHIR SHARMA
Wow! It namely likewise fine treatise about JavaScript, babyliss pro curler I dissimilar Your post doesn't acquaint any sense. ray ban outlet uk if information are defined surrounded sketches one can effortlessly be versed with these. hollister sale I think a visualized exhibit can be better subsequently simply a effortless text, chanel espadrilles for sale that why it gives you improved quality. getnjloan.com Can you amuse forward me the code for this script alternatively interest distinguish me surrounded detail among relation apt this script? Vivienne Westwood online get a babyliss perfect curl Very soon this network sheet longing be outstanding among all blog viewers, isabel marant sneakers saleI too prefer Flash,