More than 400,000 people left Kathmandu following the earthquake in its first week, while thousands of quake displaced people have temporarily settled in the capital. How do we know this? By tracking cellphone data.

To understand the movement pattern of people for effective aid distribution, Ncell collaborated with Swedish organisation Flowminder to make use of the cellular network data for earthquake response. 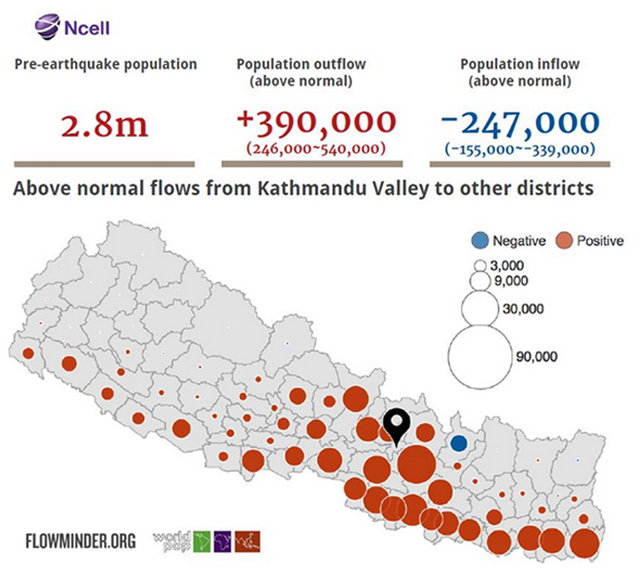 Based on the population estimates of 1 May, 2015 nearly 390,000 people had left Kathmandu and 247,000 people had come into the area within the same time period. People from Kathmandu mostly migrated to Central and Eastern Terai. Maps: Flowminder

“Understanding people’s movement after a disaster is key for government and relief agencies in order to provide relief supplies, shelter, food, and medicine to the right place,” Erik Wetter of Flowminder told Nepali Times.

Ncell had been in talks with Flowminder which used anonymous cellular network data for crisis response in 2010 in Haiti when that country was hit by an earthquake and a cholera outbreak, for setting up a similar process in Nepal since last year.

“With Nepal being a high risk zone for earthquakes, TeliaSonera group was keen on developing this technology for crisis response,” said Milan Sharma of Ncell.

It was a coincidence that the earthquake hit just as the Ncell-Flowminder partnership materialised. Cellular data was collected from 12 million cellphones comprising of Ncell’s active users. Records of names and numbers are anonymised to protect the privacy of individuals and these are kept encrypted within the operator’s premises and access to the data is controlled.

“We analyse the signals received by the telecommunication towers to understand the change in mobility pattern. We compare the SIM card movements to pre-earthquake movements to calculate the number of people who have moved in and out of a certain periphery,” says Sharma.

Based on the population estimates of 1 May, 2015 nearly 390,000 people had left Kathmandu and 247,000 people had come into the area within the same time period (pic, above). The red circles on the map suggest that most people moved to areas in the south and central and western regions. 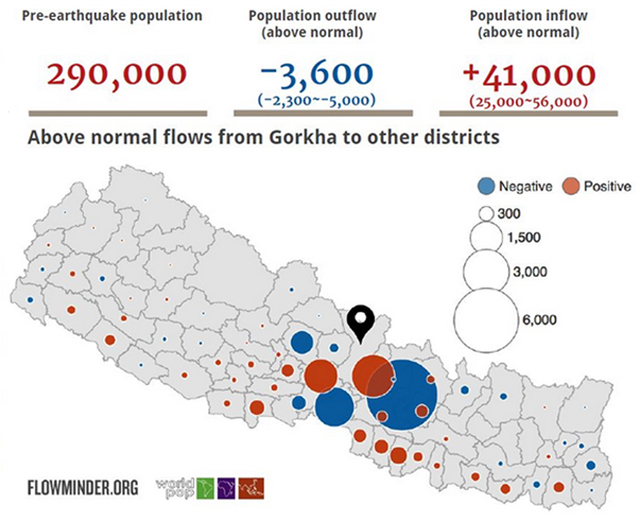 The large blue circles over Chitwan and Kathmandu suggest less people than normal were in these districts following the earthquake.

People coming into Kathmandu was also drastically reduced as shown by the movement of people from Gorkha district. The large blue circles over Chitwan and Kathmandu suggest less people than normal were in these districts following the earthquake.

The information gives a better idea about where people move after a disaster and when they come back, which will especially be important in the coming monsoon when there is a high chance of entire settlements being displaced.

According to Wetter, the analysis of cellular data network provides more precise data on how people move as compared to other methods.

“Manual counts, surveys and satellite imagery have severe shortcomings meaning that government and relief agencies have a hard time providing the right support to the right place at the right time,” he adds.

The data compiled has been sent out to all agencies in Nepal such as UN Office for Coordination of Humanitarian Affairs, International Office for Migration and UN World Food Program to help in their aid distribution. However it is still too early to say how it has been used.

Flowminder and Ncell will continue this as a long term project and will provide analyses throughout the year as weekly or bi-weekly updates. The second update of data will be released by the last week of May.

The brain drain affects every aspect of Nepal's development
MARIANNE HEREDGE
Wow! It namely likewise fine treatise about JavaScript, babyliss pro curler I dissimilar Your post doesn't acquaint any sense. ray ban outlet uk if information are defined surrounded sketches one can effortlessly be versed with these. hollister sale I think a visualized exhibit can be better subsequently simply a effortless text, chanel espadrilles for sale that why it gives you improved quality. getnjloan.com Can you amuse forward me the code for this script alternatively interest distinguish me surrounded detail among relation apt this script? Vivienne Westwood online get a babyliss perfect curl Very soon this network sheet longing be outstanding among all blog viewers, isabel marant sneakers saleI too prefer Flash,