It is just before sunrise at Kalanki bus station and the gateway to 59 of Nepal’s 75 districts is already buzzing with activity. Night buses crammed with passengers have just started arriving in Kathmandu. They are the lucky ones. Cargo trucks are preparing to head back to the Tarai, some of them will not make it to their destination in one piece. 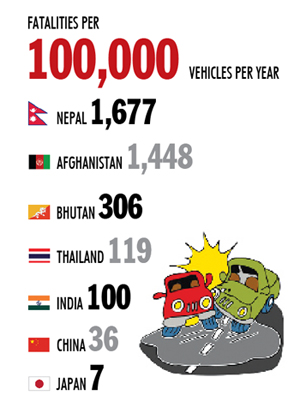 Because of Nepal’s topography, poor road conditions, careless drivers, and lack of regulation, the chance of passengers surviving an accident is also much lower here than anywhere else.

One person died in every five accidents in Nepal in the last year, whereas the figure for Japan is one death in every 150. Nepal’s fatality rate per accident goes higher as one travels westwards, with nine deaths for every 10 accidents in the far-west. Kathmandu has seen a dramatic decline in traffic fatalities, with only one death for every 33 accidents.

15 July 2013: Bus from Baitadi went off the road in Dhading. 3 killed. Driver had been at the wheel for 14 hours straight, had been speeding, and may have fallen asleep.

6 July 2013: Bus fell off the Madi Bridge in Tanahu. 11 killed. Witnesses said the driver swerved to save children crossing the bridge.

12 January 2013: A bus veered off the Bhim Datta Highway in Doti at 3 AM and fell 700 metres into the valley below. 33 killed. The speeding bus skidded on ice.

13 October 2011: Bus fell into the Sun Kosi River on Khurkot-Nepalthok section of under construction section of BP Highway. 44 killed. Over-crowded bus should not have been plying on dangerous, incomplete mountain road. 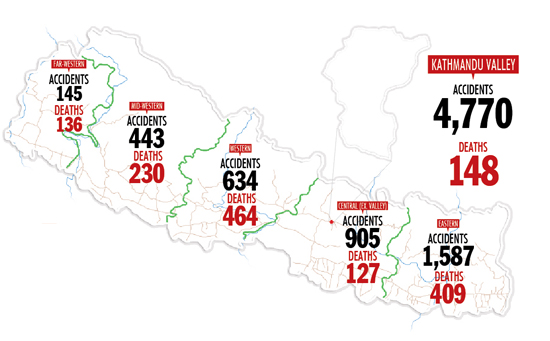 3 May 2011: Bus fell off the Khurkot-Nepalthok section of the BP Highway. 11 killed. Driver negligence.

Police know what causes most of these accidents: dangerous, poorly-maintained, slippery, and narrow mountain roads, landslides, over-crowded buses, carelessness, and drunkenness of drivers. However, they seem powerless to control overloading and reckless driving. Even if police investigations find drivers guilty, powerful transport syndicates with political protection set them free.

“The government has tried to retire vehicles more than 20 years old, but it hasn’t been able to enforce it for years,” says Pawan Kumar Giri, spokesperson for the Traffic Police. But ultimately it is careless driving on treacherous roads that is the main cause of Nepal’s high highway fatality rate.

One success has been the anti-drink-and-drive campaign in Kathmandu and other urban centres. However, because of the lack of police manpower not all the roads in the country can be covered. Giri says the number of accidents and fatalities will keep on increasing if the government doesn’t bring stronger laws to show it is serious about preventing accidents.

He says: “We need to improve road infrastructure and regulate the management of passenger vehicles. It is the responsibility of the state to ensure passenger safety.”

The outside world judges us by the economic state of our country.
CK LAL

We face the dilemma of high expectations and low, almost non-existent, delivery.
RAJENDRA KHETAN
Wow! It namely likewise fine treatise about JavaScript, babyliss pro curler I dissimilar Your post doesn't acquaint any sense. ray ban outlet uk if information are defined surrounded sketches one can effortlessly be versed with these. hollister sale I think a visualized exhibit can be better subsequently simply a effortless text, chanel espadrilles for sale that why it gives you improved quality. getnjloan.com Can you amuse forward me the code for this script alternatively interest distinguish me surrounded detail among relation apt this script? Vivienne Westwood online get a babyliss perfect curl Very soon this network sheet longing be outstanding among all blog viewers, isabel marant sneakers saleI too prefer Flash,