Microcosm of a calamity

The earthquake that hit Kathmandu that morning caused his home in Khapinche of Patan to collapse on itself.  When he finally emerged from the rubble a few hours later, he found out that half of his family had perished. 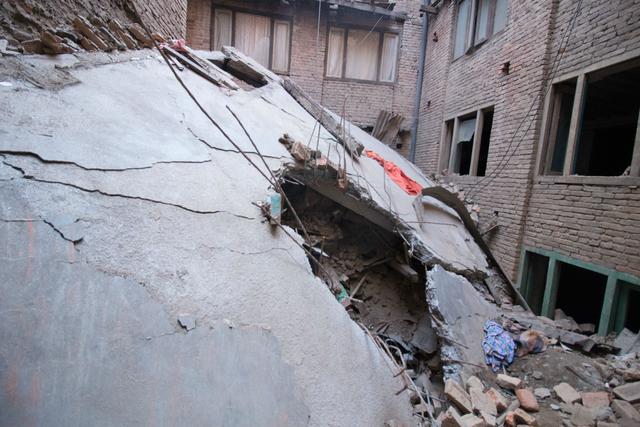 His older brother Rupesh, his mother, Nirmala Maharjan, himself and his elderly grandfather were the only members left in his original family of eight. The young boy lost his father, uncle, aunt and a seven-month-old niece.

Nirmala Maharjan was still in shock two days after the quake happened. “I want to talk but it is still very difficult for me to do so,” she told us, her face swollen from weeping.

“There was an earthquake. My house collapsed. I got wounds on my face and shoulders, and it hurts,” young Nikesh recounted. His mother also suffered cuts on her face and bruises to her body.

Nikesh is now living in a cramped temporary shelter with his mother and brother in the same neighbourhood, where water and food supplies are running low. The shelter currently houses more than 100 locals seeking refuge from the continuous aftershocks.

At least a dozen houses in the Khapinche, Chikanbaili and Tunchigali areas of Chyasal in Patan collapsed, as did many temples in the historic Darbar Square in Mangal Bazar.

Juju Kaji Awale lost four family members when his house in Tunchigali collapsed during the quake. He lost his wife while his younger brother Rakesh Awale lost his whole family, wife and two children. They cremated their deceased family members in Bholdhoka along the Bagmati. Juju Kaji was too distraught to speak. Like many, he does not have insurance for his house and remains stranded in nearby shelters. 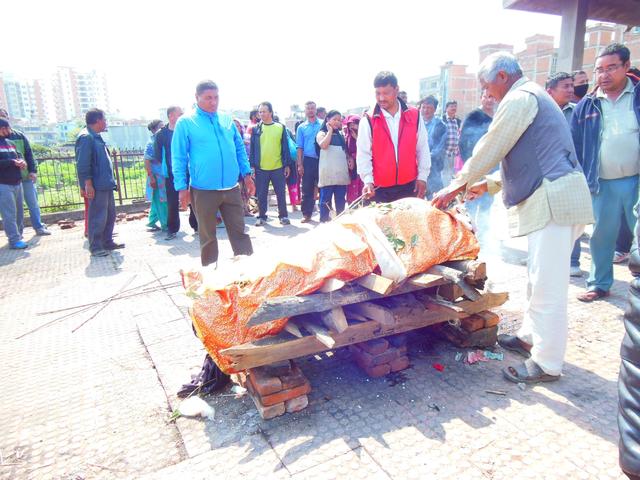 SONIA AWALE
Juju Kaji Awale's wife who died in the earthquake being cremated, along the Bagmati, at Bholdhoka on Sunday.

Shiva Shrestha, originally from Chitlang lost his wife and his young children. They were running a roadside eatery, which they had bought just two months ago in Chyasal. The building collapsed along with two other nearby houses. A customer from Ramechap and a pedestrian who happened to be walking nearby, Ramesh Maharjan, was buried in the ruins. Shrestha’s wife was also trapped under the same rubble for six hours.

The Shrestha family also lost their house in Chitlang to the destructive quake, rendering them homeless in the city and the village. Shrestha says he has not received help from the municipality or the government since disaster struck on 25 April.

“All of our things are in the house. We have nothing with us except for what we are wearing,” he added.

Kantipur , 11 October
Wow! It namely likewise fine treatise about JavaScript, babyliss pro curler I dissimilar Your post doesn't acquaint any sense. ray ban outlet uk if information are defined surrounded sketches one can effortlessly be versed with these. hollister sale I think a visualized exhibit can be better subsequently simply a effortless text, chanel espadrilles for sale that why it gives you improved quality. getnjloan.com Can you amuse forward me the code for this script alternatively interest distinguish me surrounded detail among relation apt this script? Vivienne Westwood online get a babyliss perfect curl Very soon this network sheet longing be outstanding among all blog viewers, isabel marant sneakers saleI too prefer Flash,