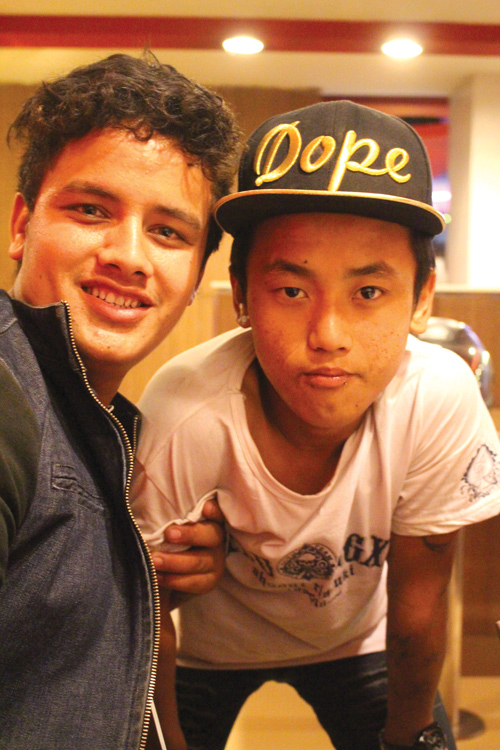 Ramesh and Pemba (above) had been friends for over four years, working in the bus park area in Kathmandu’s Gongabu Bus Station as hotel guides to usher people to hotels. They worked all night and slept through the mornings. Together, they fought rivals who tried to steal clients.

Saturday 25 April 2015 was just another morning, Ramesh and Pemba were about to sit down for their meal after a night of scouting clients. Pemba had just served lunch for both of them when the ground started shaking.

Pemba managed to run a few steps towards the exit, but Ramesh did not. They were on the second floor of the eighth floor building and the floors above came crashing down, trapping them both.

Pemba was caught in between beams in a crouching position and was rescued dramatically after five days. He came out unscathed despite being without food and water, although he found ghee from the kitchen amidst the rubble.

“I really wanted to eat roti and that is what I asked for when I was rescued,” Pemba recalls, “a foreigner brought me a pile of bread, and all I wanted was one.”

Ramesh was also trapped for five hours, with a heavy beam on his legs. Ramesh remembers being parched and craving for the Red Bull which he knew was a few steps away in the fridge. He was rescued the same day, but he woke up a few days later in hospital.

“At first I didn’t realise that I had lost both legs,” he remembers. “I asked the nurse to remove the blanket and was shocked to find them amputated. I couldn’t stop crying.”

Pemba continues to try out odd jobs in the Gongabu hotels. He started learning English but quit, then worked at a slipper factory and is now considering going abroad.

The day the earthquake struck, Ramesh was supposed to leave in the 4PM bus for Dailekh with his Rs 30,000 in savings. Every time Ramesh passes Gongabu he is reminded of the place where he got a second life.

Since the earthquake, Ramesh has gone home twice using his prosthetics to visit his grandmother, a possibility that had seemed so distant just a few months back. “It was an emotional reunion,” says Ramesh, as his grandmother had been convinced that she would never see him again.

He credits his successful rehabilitation to upper body strength that allows him to do the push-ups. He has gone back to school and is involved in a series of extra-curricular activities including racing in wheelchair marathons, swimming and basketball and has won trophies and medals in these activities.

On 31 December Ramesh was awarded first prize for the Differently Abled Idol Competition in which he wooed the audience with his solo dance performance. He is currently learning English and dreams to write a book one day about his experiences.

He had gone to Japan for swimming training, and is eager to enter competitions and train other physically handicapped like himself. “I was very excited about going to Japan but when I heard that it is a country where earthquakes occur frequently, I was a bit apprehensive” said Ramesh.

Ramesh’s dream now is to swim in the 2020 Paralympics, but is worried that he doesn’t have access to a pool for practice during winter.

Ramesh and Pemba have drifted apart, but the shared experience of miraculously surviving the earthquake has bonded them. On the first anniversary of the earthquake, the two spent the day and night together talking about their experience.

A gallery of dramatic pictures of Nepal taken from orbit.

Jana Bhawana, 5 November
Wow! It namely likewise fine treatise about JavaScript, babyliss pro curler I dissimilar Your post doesn't acquaint any sense. ray ban outlet uk if information are defined surrounded sketches one can effortlessly be versed with these. hollister sale I think a visualized exhibit can be better subsequently simply a effortless text, chanel espadrilles for sale that why it gives you improved quality. getnjloan.com Can you amuse forward me the code for this script alternatively interest distinguish me surrounded detail among relation apt this script? Vivienne Westwood online get a babyliss perfect curl Very soon this network sheet longing be outstanding among all blog viewers, isabel marant sneakers saleI too prefer Flash,