Govinda KC’s disposition at the Supreme Court on 8 January 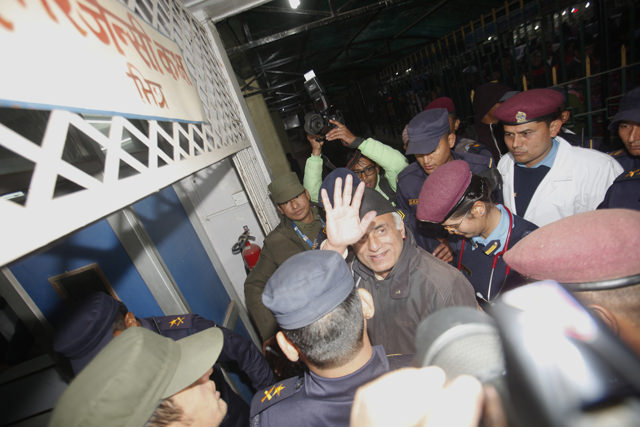 1. It is an open secret that Chief Justice Gopal Parajuli possesses two citizenship certificates, and a judicial probe into this charge is warranted.

2. Parajuli has corrected his date of birth in his second citizenship card. As per his original citizenship certificate, he turned 65 (retirement age) in July 2017. It is illegal for someone who has exceeded the age limit to hold the position of Chief Justice.

3. Parajuli absolved Lokman Singh Karki (whose appointment as the head of the Commission for Investigation of Abuse of Authority was later nullified by the Supreme Court in 2015) of all the charges. And Karki returned the favour by appointing Parajuli’s nephew as a legal advisor to the anti-corruption watchdog. He abused his power, putting justice on sale and harming the reputation of the judiciary.

4. Whether Parajuli has passed his SLC exams is disputable. Chief Justice Sushila Karki’s verdict on a writ that questioned his academic qualifications and all the documents related to the case need to be reviewed. How can a man who does not even have academic certificates become Chief Justice?

5. What have the Judicial Council and the Constitutional Council decided with regards to the media reports about Parajuli’s academic and other qualifications? The original copies of the decisions made by these councils must be produced in the court.

6. A ruling by Parajuli’s bench has reversed the government’s policy on land management, directly benefitting the real estate mafia. A probe into this matter must be ordered.

7. Parajuli harmed the judiciary’s reputation once again at the expense of the state exchequer by ruling that hotels need not pay royalty for operating casinos. How can a judge who sells justice safeguard judicial independence?

8. Supreme Court verdicts in the cases involving Chudamani Sharma (the Inland Revenue Department’s DG arrested on corruption charges but released on general bail), Gopal Khadka (Nepal Oil Corporation head suspended by the government over corruption, but reinstated by the court) and Ncell have protected the corrupt. These cases, all after Parajuli became Chief Justice, have made a mockery of the rule of law.

9. Parajuli awarded his relative Nahakul Subedi with three promotions (Supreme Court registrar, Registrar General and High Court Chief Judge) within just seven months. This blatant nepotism has disgraced the post of Chief Justice. He must go. So long as he stays put, our judiciary cannot be free and independent.

10. Hours after an impeachment motion was filed against Chief Justice Sushila Karki, Parajuli assumed office as acting Chief Justice. How can an unethical person like this make the Supreme Court respectable?

(Govinda KC’s disposition at the Supreme Court on 8 January. The  court released KC on Wednesday, seeking Chief Justice Gopal Parajuli’s citizenship and academic certificates to look into the allegations levelled against him. KC was arrested on a contempt of court case after publicly calling Parajuli ‘corrupt’.)

Managing minimum score is the way to go
DEEPAK ACHARYA

Editorial in Nepal Samacharpatra, 27 April
Wow! It namely likewise fine treatise about JavaScript, babyliss pro curler I dissimilar Your post doesn't acquaint any sense. ray ban outlet uk if information are defined surrounded sketches one can effortlessly be versed with these. hollister sale I think a visualized exhibit can be better subsequently simply a effortless text, chanel espadrilles for sale that why it gives you improved quality. getnjloan.com Can you amuse forward me the code for this script alternatively interest distinguish me surrounded detail among relation apt this script? Vivienne Westwood online get a babyliss perfect curl Very soon this network sheet longing be outstanding among all blog viewers, isabel marant sneakers saleI too prefer Flash,