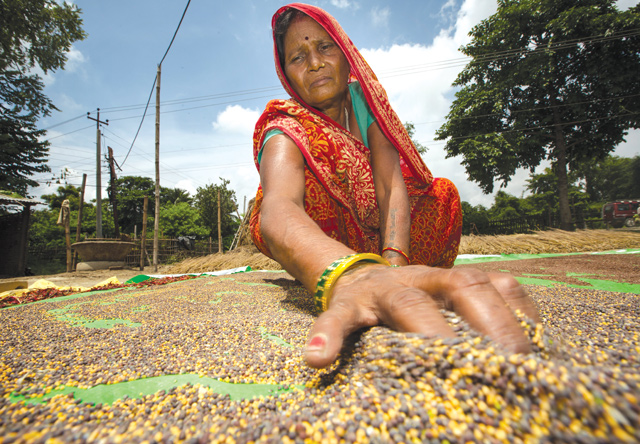 After working all day on his family’s rice fields in Bhardaha, 30-year-old Chandan Kumar Raut went to bed on Friday 11 August hoping to spend Saturday with his wife and newborn son. For him, it would be a rare day off during a busy paddy planting season.

But overnight Nepal’s southern districts received their heaviest rainfall in decades, and by the time Raut woke up the next morning much of Saptari, including thousands of hectares of prime agricultural land, was under water.

“The water was chest high. I carried my son above my head and my wife held my shirt as we waded out on to the highway,” recalls Raut.

The flood swept away all their belongings: clothes, kitchen utensils, money and food stocks. Raut feared the worst for his crop. After the flooding subsided two days later, his worst fears were confirmed.

“We would have had enough rice to last us a year, now it’s all gone. What am I going to do?” asks Raut. Chandan Kumar Raut investigates the damage to his field.

Years of disagreements over compensation had been delaying the construction of embankments along the Khaando river in Saptari. Therefore this year nothing stopped it flooding eastwards and drowing settlements and farms in Topa, Portaha and Bhardaha. Further south, because of embankments across the border in India, the Mahuli river overflowed and pooled up in places like Hanumannagar, Barsain, Koiladi and Tilathi.

The area now stands to lose up to 2,500ha of produce. Across Nepal, 40,000ha of farmland have been severely affected. “From our initial assessment eight days after the flooding we did not find anything to suggest a looming food security crisis in these parts,” says Rajendra Uprety of the Regional Directorate of Agriculture in Biratnagar. “But people have lost millions worth of investment and will lose millions more of their income.”

Pramod Kumar Yadav, 25, of Hanumannagar returned from Qatar with savings of Rs 300,000. He used that money to start a goat farm and had steadily added buffaloes to his stable. All his animals, except one buffalo, drowned. He has no idea what to do next.

The Ministry of Agricultural Development calculates Nepali farmers lost up to Rs 6 billion due to the floods. It is now working alongside the National Planning Commission and the Ministry of Finance, on a Rs 1.25 billion relief package for farmers in 30 flood-hit districts. The MoAD is hoping thousands of people like Yadav who have lost paddy, banana plantations, fish farms, livestock and vegetable farms all across the Tarai can benefit from this package. The draft proposal allocates a large chunk of the compensation for 15,000 tonnes of urea fertiliser and a similar quantity of compost.

While top-dressing rice plantations with urea does improve yield, the government will find it challenging to guarantee all farmers will get enough fertiliser to help cushion their losses. Also, Nepal does not produce enough compost required right away to condition all the farmland affected by flooding. This limited capacity is now compounded by the loss of so many cows and buffaloes.

“In addition to immediate needs, the government needs to provide free seeds to support the next planting,” says Uprety. From autumn onwards, farmers here will plant corn, wheat and vegetables, and support from the government could help them generate an income by 2018. 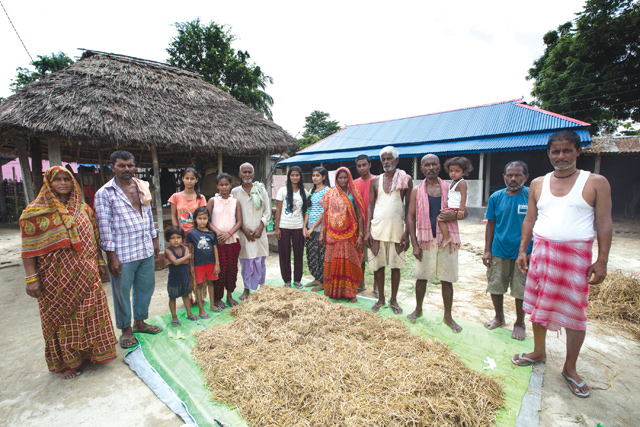 Laduwati Mandal, 55, of Bhardaha badly needs extra income to support her extended family of 22. The family lost 10ha of rice and vegetables, leaving them with just a few kilos of rice, dal and spices, and there will be no major harvest until next year. They managed to save their own lives by piling one bed on top of another to stay above the water.

Their only other source of income is a tin-roofing shop. Poring over the grains she has left to dry in the sun, Laduwati asks: “How am I supposed to feed everyone with this?”

Use the smarts of the Nepali people
ASHRAF GHANI
Wow! It namely likewise fine treatise about JavaScript, babyliss pro curler I dissimilar Your post doesn't acquaint any sense. ray ban outlet uk if information are defined surrounded sketches one can effortlessly be versed with these. hollister sale I think a visualized exhibit can be better subsequently simply a effortless text, chanel espadrilles for sale that why it gives you improved quality. getnjloan.com Can you amuse forward me the code for this script alternatively interest distinguish me surrounded detail among relation apt this script? Vivienne Westwood online get a babyliss perfect curl Very soon this network sheet longing be outstanding among all blog viewers, isabel marant sneakers saleI too prefer Flash,