Here is a model for connecting villages, creating jobs and boosting local economies after a disaster
Sonia Awale in Dolakha 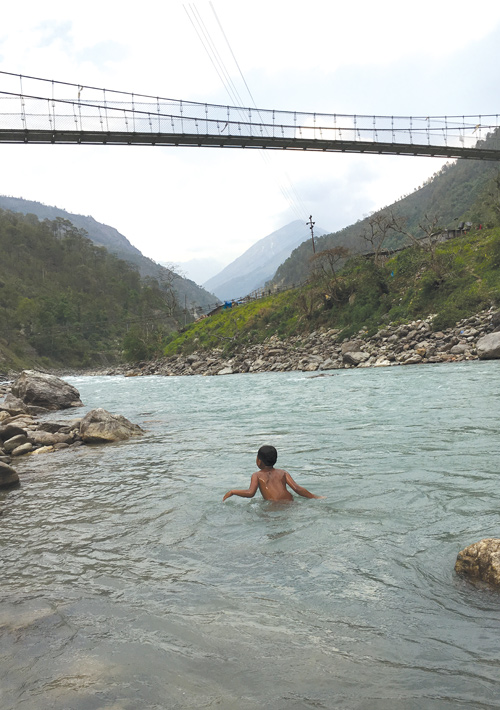 Six decades ago, Swiss geologist Toni Hagen walked across Nepal asking locals what they needed the most. They asked him for bridges to connect them to neighbouring villages and markets. There are now a lot more motorable roads, but even then, in many remote valleys of Nepal the demand is still for bridges.

When the two big earthquakes of April-May 2015 struck Dolakha,10 trail bridges were either damaged or destroyed, cutting villages off from medical help and relief supplies. Bridges that were listing after the 25 April quake, fell into rivers in the 12 May aftershock, which had its epicentre only 5 km from the town of Singati.

“This bridge was badly damaged in the first quake, but people made temporary repairs using wood, and they used it to construct this new one,” said Lila Jirel, sub-engineer at the Dolakha district Coordination Committee (DCC), pointing out the rusted wires of the old bridge dangling across the river.

Jirel opted for the suspension type construction with sturdy galvanized iron decks and wire mesh for protection. The foundation of the towers and the walls is reinforced concrete to prevent damage in future earthquakes.

The Jhangrali bridge near Singati was built by the local community with help from Trail Bridge Support Unit (TBSU) which is a project of the Swiss aid agency, Helvetas. The Swiss have been building foot bridges across Nepal ever since Hagen’s days (see box). They had built nearly all the 79 bridges that were damaged in the earthquake in the 14 worst-affected districts, and in two years Helvetas has already rebuilt 72 of them.

TBSU uses the community model for rebuilding, which is why reconstruction has been swift. A committee is set up to manage construction, and members are provided with technical support for building and maintenance. Once complete, a Bridge Maintenance Committee is formed with the DCC and Bridge Wardens appointed and trained for routine maintenance.

“Trail bridge rebuilding is one of the fastest sectors to recover post-quake because of the decentralised way in which communities themselves were involved in reconstruction," said Aman Jonchhe at Swiss Development Cooperation (SDC). "And now with unprecedented rights installed by the new constitution at the local level, trail bridges will be built even faster after the local elections." 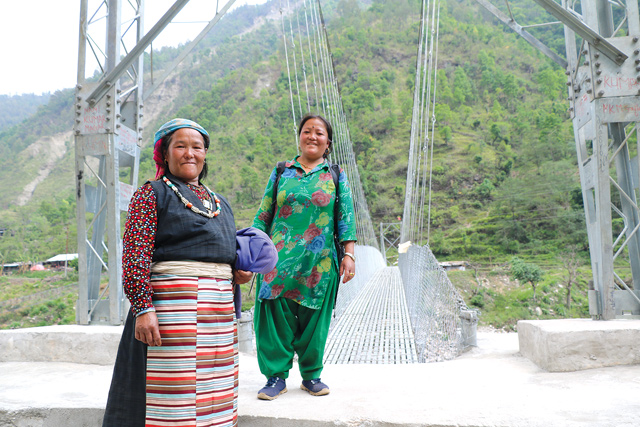 Pics: KUNDA DIXIT
REBUILDING OURSELVES: Pesi Doma and Rama Sherpa (above) hurry across the newly rebuilt suspension footbridge over the Bhote Kosi at Jhyankhu to catch a bus to Charikot. They were cut off from the road for many months after the earthquake destroyed an earlier bridge.

The bridge at Jhyanku over the Bhote Kosi was built in 1995 to connect the villages on the other side of the road, and helped hundreds of villagers with access to market. After it was destroyed in the earthquake, the new one was built 50m downstream and is a lifeline for several villages that were marooned by the disaster.

Subani Tamang, 64, owns a farm on the other side of the road, but could not travel to meet relatives after the earthquake. Nor could relief material be taken to villages up the mountains and there was no access to the market for her produce. So she decided to donate a part of her land for one of the bridge towers.

“Since the bridge collapsed in the earthquake, people in all nine villages on this side were having a hard time. After talking it over with my family I decided to give away my land,” she said, heaving a large bundle of hay across the bridge. “I feel good about it because what is there to take with us when we die? It is best to make our lives easier while we live.”

Like Tamang, there are about 7,000 people who have benefited from the 86m long bridge. Construction started in December 2015 and was completed in nine months at a cost of Rs 5.7 million.

Nawaraj Moktan of TBSU said trail-bridge building in Nepal has been a Swiss speciality and Nepali engineers have amassed a lot of experience in design and construction in difficult terrain. Moktan has trained bridge-builders in Laos and others have shared their expertise with engineers in Bhutan, Tanzania and Burundi.

There is high demand for bridges in Nepal, so TBSU selects them on the basis of the population that will benefit, prioritising areas where there is a detour of more than one hour in the absence of a bridge, the presence of disadvantaged communities, and access to market through roads on the other side of the river.

“From the very early days the philosophy has been to involve local communities in building bridges, and we are still using that model,” Moktan explained as he hiked down from the road to the village of Jaruwa. He remembers building the bridge over the Charange Khola in 1995 after floods and landslides ravaged Dolakha and Sindhupalchok, isolating hundreds of villages from health posts, schools and jobs. He is back to supervise its reconstruction after the earthquake.

“We stopped farming for a year because the bridge used to be our only route to take the oxen to plough our fields on the other side,” said Kamala Nepali, secretary of the Bridge Management Committee. “Now that the bridge is being rebuilt, we are all so relieved. We couldn’t farm, and many of us actually went hungry.” 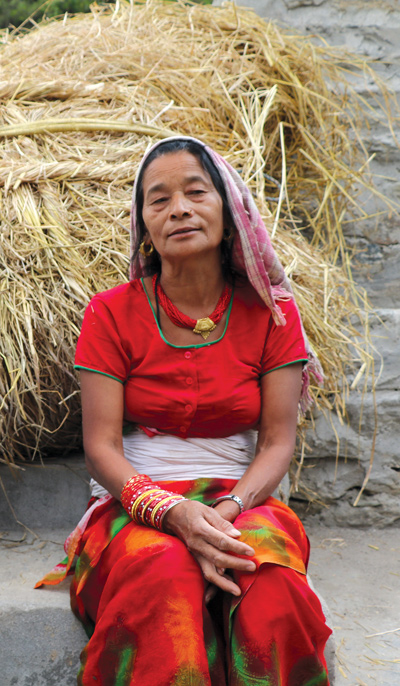 Subani Tamang donated part of her farm to accommodate the tower for the bridge.

When it is completed in July, the 56m long Rs 2.3 million bridge will connect 528 households to the highway to Charikot. But construction has been delayed because of the lack of workers. So the bridge is being built by workers from Bardia.

One of them is Rabu Raji, who used to go to India to find work every winter. This year, he came to Dolakha because he heard there were well-paying jobs in post-earthaquke reconstruction. He doesn’t regret it. “Why go to India when there is work in our own country,” he asked, tightening the steel suspension cable over the river.

But not everywhere has it been easy to set up local communities to help build and maintain bridges. There are disagreements about the site, costs and wages, and local rivalries sometimes make it complicated.

Binod Tamang, secretary of the committee managing the Jhangrali bridge, had to work hard and use all his diplomatic skills to get the communities to work together. The bridge committees have served as the responsible agency in the absence of elected village councils.

Said Tamang: “If we had elected local bodies, they would have understood our situation and problem. But we are all excited about local elections.” 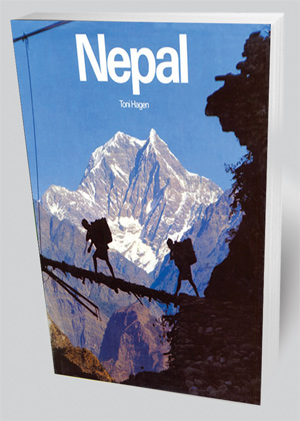 The Swiss involvement with building foot bridges in Nepal begins with geologist Toni Hagen, who experienced first-hand the difficulties of travelling in the mountains. Hagen first came to Nepal in 1950 and over the next 12 years walked 12,000km across the country.

He helped launch the Pedestrian Bridge Project in 1960, and the first foot bridge was built over the Marsyangdi a year later. The Suspension Bridge Project started in 1973 and continued until 2001 with help from the Swiss Association for Technical Assistance (SATA), later known as the Swiss Agency for Development and Cooperation (SDC).

Another Swiss aid agency, Helvetas, started the Bridge Building at Local Level project in 1989, involving local communities to use a flexible design. Today, 350 new bridges are being built every year and there are more than 6,000 across Nepal, and not just in the mountains.

Q & A with Aman Jonchhe,Program Management Specialist at SDC (Swiss Agency for Development and Cooperation). SDC has been assisting Nepal to build Trail Bridges for over five decades.

Nepali Times: Can you briefly summarise the history of Trail Bridges in Nepal?

Aman Jonchhe: The trend of footbridges in Nepal started with geologist Toni Hagen. After walking across the country in the 1960s he realised the need for bridges for development. From the 1970s, we started building bridges in a plannedmanner, in collaboration with the Government of Nepal. By the end of the 1980s, 25 bridges were being built every year.

With the arrival of democracy in the early 1990s, we adopted BBLL (Bridge Building at Local level), made local people realise the need for bridges and trained them to build bridges themselves. By the end of the decade we were making 100 bridges a year. In 2009, the Government envisioned that no citizen would have to detour for more than an hour in the absence of a Trail Bridge. This helped us to define priorities. In 2015-2016 alone, we built 422 bridges across Nepal.

Was community involvement a key to the rapid progress?

It is more productive and efficient to involve local people. This also creates a sense of ownership, which is the first step for growth and development. We also created an environment for progress by developing skills at local level and simplifying the planning and budget procurement for Trail Bridges.

72 of 79 trail bridges damaged or destroyed in the earthquake havebeen rebuilt. What were the weaknesses and what did we do rightduring this process?How can we improve?

When we sent experts in the field, only 68 were found to be affected, but when we started working in the field, we found 11 more trail bridges that needed to be rebuilt.

Trail bridge rebuilding is one of the fastest sectors to recover post-quake, first because reconstruction is decentralised and secondly, because we agreed to follow the existing system where roles and responsibility were defined.

At the same time, the new Constitution has provided us an opportunity to make improvements. For the past 15 years we were working without local representatives, but with the local rights installed by the new Constitution, Trail Bridges will be built even faster.

What is your assessment of Nepal’s recovery efforts post-earthquake?

The disaster that we suffered was of an unprecedented scale and a short period of time isn’t sufficient to recover. What didn’t help were our own expectations. Reconstruction doesn’t happen overnight, especially when one has to createan institution from the ground up with new procedures and mechanisms. There are plenty of places to improve: we can start by better coordination,and Trail Bridge rebuilding is a good example.

Has Nepal been able to build onto its Trail Bridge success?

Nepal leads in Trail Bridge building expertise, andNepali technicianshave played a vital role in the transfer of technology around the world.

"Journalists reduced to being government mouthpieces."

The United States of Reason

The silent majority whose hearts arent with Bush and the Neo-Imps are desperate for an alternative.
DANIEL LAK

One small step for womankind

The recent Supreme Court judgment on marital rape hasnt yet become law, but abused wives could soon get some respite.
RAMYATA LIMBU

Did Christina Rocca figure out what is really going on in Nepal?
CK LAL
Wow! It namely likewise fine treatise about JavaScript, babyliss pro curler I dissimilar Your post doesn't acquaint any sense. ray ban outlet uk if information are defined surrounded sketches one can effortlessly be versed with these. hollister sale I think a visualized exhibit can be better subsequently simply a effortless text, chanel espadrilles for sale that why it gives you improved quality. getnjloan.com Can you amuse forward me the code for this script alternatively interest distinguish me surrounded detail among relation apt this script? Vivienne Westwood online get a babyliss perfect curl Very soon this network sheet longing be outstanding among all blog viewers, isabel marant sneakers saleI too prefer Flash,