“We can’t live as victims forever, we need closure. If the sacrifice of our relatives is recognised it would help the healing process.”

JOB DONE: Janak Bahadur Raut (far right) and Suman Adhikari (second from right) with other members of the government taskforce before submitting their report on the TRC to the Ministry of Peace and Reconstruction in April.
For war victims and human rights activists gathered at the Supreme Court on the morning of 10 July for the hearing on their writ petition, it was to be a tedious and frustrating day. More than 200 victims had filed a petition earlier in the year demanding amendments to the Act on the Commission on Investigation of Missing Persons, Truth, and Reconciliation which was approved by the parliament in April.

But hopes of a speedy hearing were crushed as the bench of three justices postponed the case citing a lack of time and did not schedule an alternate date. The court’s indifference has left victims and human rights activists wondering once again if the government is trying to intentionally delay the process.

“Yes, it’s not possible for the state to meet all the demands of victims or provide compensation for all our loss. But it can prepare good policies and programs,” said Suman Adhikari, one of the petitioners whose father was executed by the Maoists in 2002. “If the government makes an effort to win our hearts and shows a genuine desire to pursue justice, then we victims might agree to lessen the punishment for those accused. But pressurising us into granting amnesty is not acceptable.”

The final bill is a result of eight exhausting years of political wrangling, court battles, and false starts. As it stands now, the draft not only makes a mockery of justice but brings the process back to square one.

It has provisions allowing the Commission to initiate reconciliation between victims and perpetrators even in cases of serious human rights violations without the mandatory consent of those who suffered. It restricts prosecution in cases that are mediated and gives the attorney general, a political appointe, and the Ministry of Peace and Reconstruction the power to decide whether to recommend prosecution.

The draft is similar to the one that the Baburam Bhattarai government tried to pass in March 2013 through an ordinance which was eventually ruled unconstitutional by the Supreme Court in January 2014, and lawmakers were ordered to make sweeping changes.

There was a glimmer of hope in March when the government set up an 11-member taskforce to recommend a TRC bill in line with the Supreme Court’s verdict. For the first time, the state included victim representatives - Suman Adhikari, Manjima Dhakal, and Janak Bahadur Raut (read below) - at the policy making level.

But in a tactless move, the Ministry of Peace and Reconstruction also included Chuda Bahadur Shrestha, a former superintendent in the police who is accused of being involved in the murder of five men in Dhanusha in 2003, in the taskforce. Shrestha resigned only after victims objected.

The members were also told to sit behind closed doors and complete the report in 10 days. “We were actively discouraged from holding discussions with victims and other stakeholders. The official reasoning was that since consultations had been done numerous times in the past, the conclusions were going to be the same,” explained Raut. But the team insisted on holding the meetings to give survivors and victims’ families a sense of ownership.

As issues of representation and identity take on greater significance in Nepali mainstream politics, questions about who speaks on their behalf have become key concerns of conflict survivors. Unfortunately, the bill requires neither the recommendation committee nor the commission itself to include victim representatives.

Said Adhikari: “For non-victims, the conflict was like watching a film. People are killed in movies all the time. The ones who suffered, naturally, are the ones who understand the pain and know where it hurts the most. Others, no matter how empathetic, can only work through assumption.”

Eventually, the taskforce report was discarded and the government set up another six-member committee with officials from the PMO, Law Ministry, and the Ministry of Peace and Reconciliation. Then undermining all previous efforts to create a victim-centric TRC and disappearance bill that met international standards, three politicians from the NC, UML, and UCPN (Maoists) ultimately decided the fate of Nepal’s transitional justice mechanism in April.

“It’s unfortunate that the process is now stuck in court again. But I think a common ground exists for all of us – victims, politicians, security forces – to reach a compromise. Those responsible for serious war crimes cannot be given amnesty, but those who committed lesser offences can be given shorter sentences or even pardoned if they are willing to own up to their crimes and ask for forgiveness,” said Dhakal.

The existing draft bill fails to meet international standards of prosecution and reparation. However, the larger and more central goal of a TRC is to reach the heart of the conflict so as to ensure non-repetition not just of the crimes, but of the oppression and prejudice that led to violence in the first place.

For this to happen, justice mechanisms have to go beyond the narrow, legalistic approach to seeking truth and must include provisions that promote institutional reform and bring about changes in domestic laws. Our bill is silent on both counts.

Said Raut: “Long-term reforms like amending security policies and regulations are a must if we want to make sure that there is no repeat of past mistakes. Improvements within political parties and state institutions are also required so that these organisations are better suited to serve the people and our future generations can feel that they have access to justice.”

A successful commission, therefore, is one that listens and documents the experiences of mistreatment, sufferings, and struggles of people during war even if they are not direct victims. It might be hard to verify each and every violation making prosecution impossible, but as experiences of other post-conflict countries have shown, sharing the pain of the past with the larger community can be a means of healing itself.

Said Manjima Dhakal: “We can’t live as victims forever, we need closure. If our stories are heard, if the sacrifice of our relatives is recognised and if we are made to feel like their contribution led to change and prosperity in the country, then it would help our healing process.” 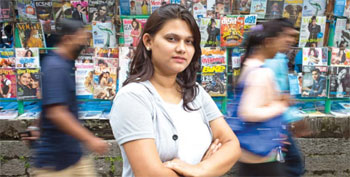 Manjima Dhakal, 23, is a reporter at The Rising Nepal. Originally from Harmi in Gorkha, Manjima was seven when her father Rajendra Prasad Dhakal was disappeared from Tanahun district by the police on 8 January 1999. An active member of the Maoist party, Dhakal was a lawyer and chairman of the Gorkha District Bar Association, and it wasn’t the first time he had been detained.

In 2009, the Supreme Court finally named police inspector Kush Bikram Rana as one of the prime culprits and asked the state to provide compensation to the family and free education for the children. Besides reimbursement for legal fees, Manjima says none of these measures have been implemented.

As the eldest of three children, Manjima has had to protect her siblings from a tragic past and she is active in the fight to uncover the whole truth about their father’s disappearance.

There is a sense of vulnerability, frustration, and hurt in Manjima’s voice as she says: “Many in Nepal have turned the transitional justice process into a means of livelihood and the longer it is drawn out, the better for them. But I want this to get over with as soon as possible because we have lived with the mental anguish of not knowing what happened to our father for far too long.” 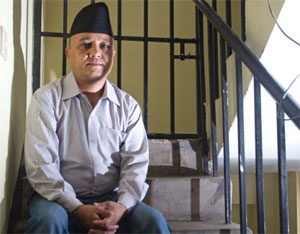 Janak Bahadur Raut, 39, is the chairperson of Conflict Victims’ Society for Justice which works with survivors from both sides of the war. On 15 April 2005, Raut, a native of Kapilbastu, was detained by security forces on accusations of treating Maoist combatants at his health clinic. He was blindfolded and subjected to electric shock and other forms of physical and mental torture for 18 days at Shivadal Barrack in Gorusinghe.

“The government still does not have proper documentation on the number of victims who were tortured during the war,” admits Raut. “When we ask why, officials tell us ‘There were so many people who were beaten and tortured, how are we supposed to keep track of all?’”

It took Raut more than two years to recover from his physical injuries and says he still feels weak. He filed a case at the district court in 2007 and in a hearing on January 2008, the court convicted Colonel Kumar Lama, ordered disciplinary action against him, and asked the government to provide compensation. In 2013, Lama was arrested in the UK under the universal jurisdiction on torture. The Nepal government has been trying to get the colonel released through bilateral negotiations. 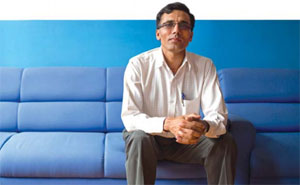 PICS: BASIL EDWARD TEO
Suman Adhikari, 38, heads the Conflict Affected Orphans Society and has been actively campaigning for justice for more than a decade. His father Muktinath Adhikari was the headmaster at Padmini Sanskrit Higher Secondary School in Duradanda, Lamjung district. Muktinath was murdered by the Maoists on 16 January 2002 on suspicions of being an 'informer' and for not donating 25 per cent of his Dasain bonus to the party.

The harrowing photo of the teacher’s lifeless body tied to a tree has become emblematic of the brutality faced by thousands upon thousands of Nepalis during the 10-year conflict. Immediately after the murder, the Adhikaris lodged a complaint with the district police, but there were no investigations. In 2011, the family filed a First Information Report against three suspects (Devendra Poudel, Sadhuram Ghimire, and Dhruba Adhikari). A day later, Poudel was made the coordinator of the District Peace Committee of Lamjung.

Says Adhikari: “The state tells us not to talk about justice because it will derail the peace process. What kind of peace is it where the victims cannot raise their voice? This will only sow the seeds for future conflict.”

Haunted by ghosts of the past, RUBEENA MAHATO